Diamondbacks 7, Orioles 6: Do not go gently into that good night

Just another heart-stopping, double blown-save victory for the Diamondbacks, with not one, but two players hitting their first home-run of the season, and another run scoring for us on fielder's obstruction.

Share All sharing options for: Diamondbacks 7, Orioles 6: Do not go gently into that good night

This one didn't take long to get on to shaky ground, as the Orioles' first two batters got hits, albeit the leadoff man with a high chopper up the first-base line that Paul Goldschmidt was unable to corral before the batter had legged it past him. That proved to be crucial: a double-play gave us hope that Wade Miley might escape damage, but he spiked a fast-ball through Wil Nieves' legs, and the wild pitch gave Baltimore the lead. Two more hits in the second inning gave Baltimore a 2-0 lead, and there were rumblings in the Gameday Thread (not least from me, asking semi-seriously if anyone wanted to do the recap).

However, the Diamondbacks tied things up during the second, in a manner best described as "interesting." Firstly, Aaron Hill led things off with his eighth home-run of the year, going deep for the third game in a row. He's the second Arizona player to homer in three consecutive games this year, Goldschmidt having done it May 6-8. Hill also had homers in three consecutive games last June, and is now one short of the franchise record, which has been done by four players, most recently Mark Reynolds in 2009 (the others being Troy Glaus, twice, and Reggie Sanders). Aaron is also riding a five-game multihit streak, two shy of the D-backs mark there.

After a walk and a fielder's choice, Gerardo Parra stole second, then stole third and when the pitch clanged off the catcher's glove, he tried to motor around third and score. He was out by a mile, but on appeal, it was deemed by the third-base umpire that the Baltimore defender there had obstructed Parra's progress, and he was awarded home-base as a result. Former Diamondback manager Buck Showalter, now in the visitors' dugout, came out to argue, and he had something of a point. While there was contact, it's doubtful Parra would have scored without it, but the umpire's decision stood, and the game was tied.

Baltimore took the lead again in the top of the fifth, and the bottom half was pretty much a summary of the way our offense has played of late. A.J. Pollock led things off with a triple - running through Matt Williams' stop sign to get there from second. However, Adam Eaton hit the first pitch he saw right to the first baseman, Goldschmidt struck out for the third time in the game, and Aaron Hill grounded out to third-base, and Pollock was left with a slightly shorter trip back to the outfield than if he was coming from the dugout. Goldschmidt is looking a little tired of late, with his K-rate definitely on the increase. Over his last 16 games, he has fanned 21 times in 60 at-bats.

He wasn't the only one tonight though, as the Diamondbacks seemed to have serious problems dealing with Scott Feldman's balloon curve, and he had eight K's through 5.1 frames. The Baltimore bullpen came in riding a good recent streak, but Arizona got to them with a three-run seventh. It started with Didi Gregorius wearing a pitch on his shoulder, and Matt Davidson came off the bench to work a pinch-walk. Adam Eaton made it a one-run game with one down, and back-to-back RBI singles by Aaron Hill and Martin Prado gave Arizona the lead  It was definitely an AL kind of game: the Orioles had thrown a total 147 pitches through those seven innings.

Wade Miley was suddenly in line for the W, having gone through seven innings, allowing four runs on seven hits and a walk, with three strikeouts. It wasn't his best outing, that's for sure, yet was "good enough", and it was a relief to see a starter going deep into the game, after Zeke Spruill recorded nine outs yesterday. J.J. Putz came in and got the first two outs of the eighth inning, albeit fairly loud ones, and with the major-league leader in home-runs up, Kirk Gibson turned to left-handed specialist Joe Thatcher to face Chris Davis. He did get two big swinging strikes, but on a full count, Davis made contact and went opposite field for home-run #43 and our third blown save in five games.

If the evaporated lead affected Nieves, he didn't show it. After Heath Bell got the final out in the eighth, our catcher immediately restore the home-team advantage with his first home-run in more than a year - his previous one came on August 9 last season, off the Pirates' Wandy Rodriguez. That gave Brad Ziegler a save opportunity, but two hits, a walk and a sacrifice fly allowed the Orioles to push across the tying run. The key play was a ground-ball to Goldschmidt with men on first and second, which he initially thought about throwing to second, then decided to get the easy out at first, but double-pumped the throw, and everyone was safe. Inexplicably, this was scored a hit.

If the evaporated lead affected Nieves Eaton, he didn't show it. Indeed, he wasted even less time, cranking the first pitch he saw from new reliever Darren O'Day into the pool area for his first home-run of the season. He was then showered with dirt and pounded in to oblivion by his team-mates at home, as we celebrated our eighth walk-off victory of the season. Eaton's reaction was classic:

Eaton and Hill each had two RBI and a pair of hits, including a home-run, while Martin Pradon reached base safely three times, on a hit and a pair of walks. Brad Ziegler was the lucky recipient of a vulture win, improving his record to 6-1. The Diamondbacks improved their record in games where they blow a save to 12-9, which is actually better than their record when they don't (48-48). Suspect not many other teams can say the same thing. 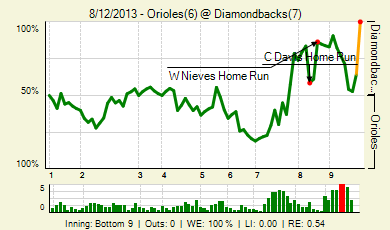 The Diamondbacks have generously offered

To spread the doom out over the course of an entire season.

The same two teams go at it again tomorrow night, though it can hardly be any more entertaining than this encounter. Randall Delgado starts for the Diamondbacks, and first pitch is at 6:40pm.