Diamondbacks Thing of the Week: World Series ring (the real thing, this time!)

Earlier in the season we wrote about a replica D-backs World Series ring you could buy on Ebay. Now, we see the real McCoy up for sale: it's only ten grand...

Share All sharing options for: Diamondbacks Thing of the Week: World Series ring (the real thing, this time!)

Presented here is a rare piece, destined to be part of your "elite" collection. The Arizona Diamondbacks won the World Series in 2001 against the New York Yankees. This is a perfect time to grab a piece of history. The ring was given to Ed Durkin, the heart and soul of the Diamondbacks scouting department for 11 years.

We purchased this ring directly from Ed Durkin. Inside the ring bears an engraving reading "9-11-01 Never Forget". The ring measures out to a size 14-3/4. The composition of the ring is solid 10K yellow gold, weighing in at 56.3 grams with approximately .50CTW of diamonds. The gold and diamonds were tested by a professional jeweler and are guaranteed authentic.

Don't miss this chance to possess something many only dream about. Unless you were presented one of these rings as a member of the Diamondbacks organization, you would not otherwise have the opportunity to own this coveted ring...until now! Opportunity is knocking!

Please see the photos of the actual item.

This item is in excellent condition with only minor blemishes from normal wear (If you had won the World Series you'd have worn it too). The diamonds are all intact, undamaged and appear to be original to the ring. The blemishes range from very light scratches, minor dings and insignificant surface scuffs that are barely noticeable. This listing includes the ring only, no box or paperwork.

Durkin spent 11 seasons with the Diamondbacks, beginning while the franchise was still taking shape - he played a big part in the 1997 Major League Expansion Draft, which helped stock the team's initial roster. He was the Eastern Regional Supervisor of scouting for seven seasons, and was part of Arizona signing Brandon Webb, Chad Tracy and Carlos Gonzalez, among others. He became our National Supervisor in 2007, but left us the following October for Washington, following Mike Rizzo to become the Nationals' National Crosschecker (as it were!), and a Special Assistant to the Vice President.

It read that Durkin is now retired and living in Florida, and that would tie in with the seller of the item: Golden Nugget Pawn & Jewelry, have two locations in the state. I presume they bought the item off Durkin (or a member of his family), and are now selling it on. I can see why he would have no particular need any more for such a serious piece of bling. Because what we have here is the full-on version, not the "2001 World Series Ring Lite" which we found previously on sale for $2,250, and is priced to match. Indeed, it's almost twice the cost for which a similar ring (it seems to be a slightly-different style on the sides) sold at auction in April 2006.

If only I'd won the Powerball jackpot this week, I'd be all over this. I was just talking with Mrs. SnakePit about the most memorable days of our lives, and the World Series Game 7 win was pretty much at the top of our lists. That's in large part because of my post-game marriage proposal, I should add - sports fandom is, and always should be, secondary to such things. What better way to mark it, than with a two-ounce hunk of sports capitalism, at its most ostentatious? Maybe I'll open up a Kickstart project to that end. All donations gratefully received. 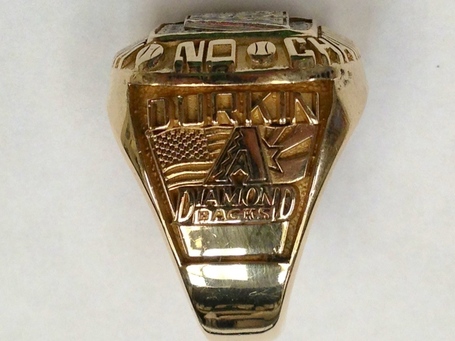