The Diamondbacks' five-game winning streak came to an abrupt end as they met a buzz-saw named Zach Greinke tonight. He held Arizona to two hits over seven innings, and while Randall Delgado gave us a quality start, that wasn't enough.

Share All sharing options for: Diamondbacks 1, Dodgers 6: Delgado singled out

"I'm the enemy. Because I like to think, I like to read. I'm into freedom of speech, freedom of choice. I'm the kind of guy who would sit in the greasy spoon and think "Gee, should I have the T-bone steak or the big rack of barbecued spare ribs with the side order of gravy fries?" I want high cholesterol. I want to eat bacon, butter and buckets of cheese alright? I want to smoke a Cuban cigar the size of Cincinnati in a non-smoking section. I wanna run around naked with green Jell-o all over my body reading a Playboy magazine. Why? Because maybe I feel the need to, okay, pal?"

Yeah, the game started off as Diamondbacks vs. Dodgers, with Demolition Man on AMC occupying us during the commercial breaks [I've seen that gem enough times I could pretty much recite you the dialogue, so it's not as if we need to see every scene]. But as things unfolded in the game, the ratio of baseball to Stallone/Snipes gradually shifted toward the latter, and by the end, we were pretty much locked on to the movie, with occasional checks back to the game to see how it was going. Click. Yep, still losing. Click.

One of the things this season has particularly taught me, is the importance of the long view. I no longer get even fractionally upset about single at-bats, poor innings or even bad games, because they represent such a tiny fraction of the overall picture. Every team will have a losing streak. It will probably be long, and will suck. You can lose seven in a row and even have a month where you go 11-15, and still win the World Series, as the 2011 St. Louis Cardinals did. Bottom line: you're going to lose 60 games or more, just about every year, and I ain't even slightly concerned, while I know we're assured of going to bed tomorrow night, alone in possession of first place in the division.

Tonight wasn't really much of a shock. Randall Delgado was decent enough, but Y*s**l P**g's miraculous luck with balls in play appears to have infected the entire Dodger line-up this evening, as they had a BABIP of .440 against Delgado. They knocked out 11 hits - all of them singles - off our starter, but it was enough to score three runs over six innings. He was still throwing plenty of strikes, and didn't walk anyone, but there didn't seem to be quite the same movement or precise location as he had against the Mets at Citi Field. He went six, with three strikeouts; he still seems the most likely candidate for Reno, when Brandon McCarthy or Trevor Cahill return.

The visitors' luck with BABIP was limited to facing Delgado either. Charles Brewer, Tony Sipp and Will Harris faced 16 more Los Angeles batters over the rest of the way, with one walk and four strikeouts: the remaining 11 balls in play led to six hits, for an overall BABIP on the night of .472 for the Dodgers. Sipp was particularly sharp, fanning both batters he faced, including the Puig: it's abundantly clear if you saw his at-bats in the series against the Giants, that he will swing at absolutely anything, but the Diamondbacks' pitchers appear to have skipped out on their video homework, and he had two singles before they figured it out, and fanned him in his 4th and 5th PAs.

Particularly embarrassing was that Greinke had more hits at the plate (three) than he allowed over seven innings of work (two). There have been seven three-hit appearances by pitchers in the majors this year - two of them are now owned by Dodgers' starters against the Diamondbacks, with Ryu having the other, back in April. Another factor that perhaps didn't help was an outfield of Martin Prado, Gerardo Parra and Jason Kubel. The last-named operated in right-field and looked largely lost, with more than one ball that you like to think a more proficient fielder would have caught. He did gun down Hanley Ramirez at second on one, but a run also scored as a result.

It wasn't as if Kubel made up for it at the plate, though to be fair, he was hardly alone, as the offense managed only four hits in total. Our best chance against Greinke came in the third, when he lost control and walked Kubel and Didi Gregorius to get things started. But Delgado bunted the ball too firmly back to the pitcher, allowing Greinke to nail the lead runner, Gerardo Parra struck out swinging at a pitch which posed a bigger threat to his shoe-laces, and Aaron Hill grounded out to the infield on his first pitch. We were one-hit into the bottom of the seventh, a Paul Goldschmidt single being the sum total of offense, and he was promptly erased by the inevitable double-play.

Martin Prado doubled with two outs in the seventh, and the Diamondbacks finally got in the board with two outs in the ninth inning. Goldschmidt got his second hit of the night, advanced to second on defensive indifference and broke up the shutout bid, scoring on Chavez's double. More of a token gesture than any real comeback, however, and there was no further damage done. 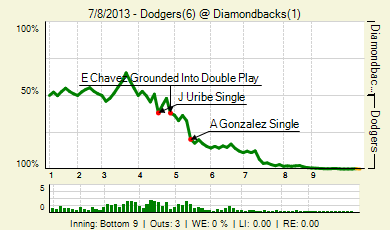 This does reinforce one thing

My God are the Rockies terrible

We'll be hoping for better tomorrow night, as the newest Dodger makes his debut on the mound, Ricky Nolasco starting for them. We send up Ian Kennedy, and the first pitch will be 6:40pm again.