Because even beer can be take-out, and getting beer to-go is awesome.

We all have various things we like and we all (at least sometimes) like to get those things to-go.

Enter the growler! Your half gallon jug of beer and fun. 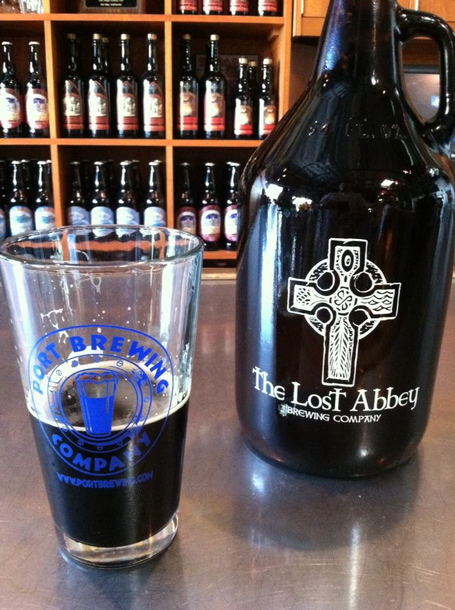 Back before supermarkets, reliable/affordable refrigeration, bottling and pasteurization it was quite common for the thirsty masses of America and Europe to saunter on over to the local pub and pick up a bucket of beer to take home. So it was not too strange a sight to see (before Prohibition at least) someone out on an errand to pick up a pail of lager/ale for supper as they returned home from work.

Nowadays the beer is far better and the means of transporting such suds more reliable and sanitary. Growlers thus have become an effective way for brewers to market their product (see the pics above and below), and refill prices between $8-$15 is an added incentive for supporters to keep coming back to the brewery. Also growlers are a very popular way for consumers to take home beer that might otherwise not be bottled, or that quite simply isn't distributed in your state. Namely the beer below (Velvet Glove by Iron First Brewing Co) can only be found in The Peoples Republic of California, and thus must be smuggle across the border to our sun drenched state. 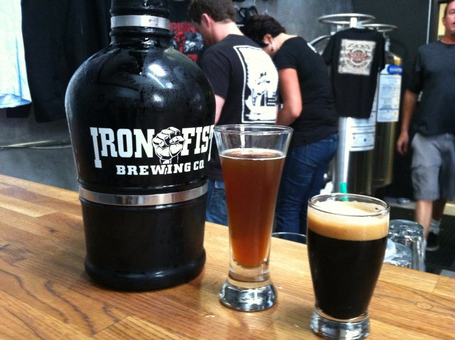 Luckily in our case as Arizonans (at least for most of our readers) our laws are a bit more liberal (libertarian?) than most. Thanks to our enlightened state leaders (haha), and a lot of lawyers from Walgreen's (I kid you not) last year was the first year any bar or brewery could allow for growler fills of any beer on tap regardless of whether or not you had the container from the brewery at the brewery. In essence I could walk into any bar/brewery (that allowed growler fills) and fill any glass or clear plastic container (1gal or below) with any beverage on tap; be it from Arizona or elsewhere.

With that in mind the glassware pictured above from my recent trip to SoCal can only be filled at their corresponding brewery location, which is a bit of a bummer for a significant part of the population not lucky enough to live next to Iron Fist or Port/Lost Abbey Brewing. So despite it being the Dieing Times here in Phoenix, I can at least sidle on over to the local beer bar with a glass jug of my choosing and fill said jug with anything my heart desire.