Dbacks 5, Rockies 0: An Evening On Pandora

Welcome to Dbacks 2013 #86 in this latest issue we have Tyler Skaggs vs Jorge De La Rosa in a useless pitcher stat on a pole a match. Who will come out on top? Read after the jump to find out

Share All sharing options for: Dbacks 5, Rockies 0: An Evening On Pandora

The game starts off fairly quiet with nothing of note happening except for a Corey Dickerson single. The bottom of the 1st is a bit more lively however, as A.J. Pollock mashes a leadoff triple to right field. Aaron Hill strikes out and during Goldschmidt's at bat, Pollock scores on a wild pitch to make the score 1-0 in favor of the Dbacks. Goldy and Miguel Montero make two quick outs to end the inning. The game quiets down until the botom of the third inning when Didi Gregorious hits a single to center and Skaggs moves him over to 2nd with a sacrifice bunt. A.J. Pollock hits a double that was about an inch away from being a home run and moves Gregorious over to third. Aaron Hill reaches 1st on a fielder's choice but Didi is thrown out at home. Goldy does as Goldy usually does and Pollock scores to make it 2-0 Dbacks. Miguel Montero strikes out in the next at bat to end the inning. The game quiets down once again until the bottom of the 6th inning when Hill leads off the bottom of the 6th with a double and Goldschmidt follows up with one of his own and scores Aaron Hill to make the score 3-0 in favor of the Dbacks. Montero, Ross and Prado make 3 quick outs to end the inning. Skaggs mows the Rockies down and the action picks up again the bottom of the 7th when Didi gets the offense started with a single to center and Skaggs sac bunts him over to 2nd. Pollock walks and Hill singles and scores both Gregorious and Pollock to make the score 5-0. The game sails along after this. Skaggs pitches a scoreless 8th and is replaced in the ninth by JJ Putz who pitches a scoreless ninth. The final score is 5-0 in favor of the Dbacks. 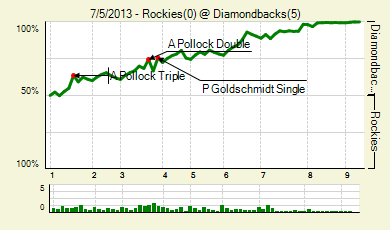