The Padres tripled and brought their runner home. The Diamondbacks tripled and left him there. That was the difference in the game this afternoon, as a fine start by Patrick Corbin was wasted.

Share All sharing options for: Diamondbacks 0, Padres 1: A tale of two triples

It seems like the Diamondbacks tend to struggle out of the gate after the All-Star break. Last season, a sweep at the hands of the Cubs in Chicago more or less killed any realistic hopes of the division, sending us 6.5 games back. This year has been no better, as we have yet to win a series, in three attempts, with an overall record of 4-6 in the first 10 contests after the lay-off. There's been no particular consistent reason: we've had losses where the starting pitcher hasn't been good, and ones like today, where the offense just hasn't got it going. This was our first shutout at home since August 24 last year: oddly, also against the Padres, with Patrick Corbin on the mound.

The difficult third out in the first proved Corbin's downfall. With two down, he allowed a triple, and an RBI single gave the Padres the lead. In the second, he also gave up two-out hits to the #8 + 9 San Diego hitters, though escaped further damage. He settled down with a quick and clean third, and it looked like the Diamondbacks would tie things up after Cliff Pennington led off with a triple into the right-field corner. However, Corbin flew out to left, just too shallow for Pennington to risk it - had they known Adam Eaton would ground out to the infield (albeit after missing a bloop double by inches) and Aaron Hill strike out, they might have risked it. Ah, the joys of hindsight.

Corbin continued with a solid outing, keeping the Padres off the board and at one point retired 14 of 15 batters faced. He got through eight innings on 103 pitches, scattering six hits, but the triple was the only one for extra bases. He walked none and struck out eight, reducing his ERA for the season to 2.24. The loss was only his second of the season, with his record now 12-2: in those two defeats, the Diamondbacks have scored a total of one run in support of Corbin. He deserved better: the Game Score posted of 74 was his fourth-best of the year. Only one D-backs pitcher since April 2009 has had a better score, and taken the loss [Wade Miley got a 76 last June].

Unfortunately, the Diamondbacks offense proved less capable still, struggling to do anything against Tyson Ross. Even the normally mild-mannered Paul Goldschmidt seemed frustrated, as shown above, firing his equipment into the dugout after a first inning strikeout [he's 2-for-20 with nine strikeouts over the past five games]. Ross's slider in particular gave the Diamondbacks fits, with some ugly swings and misses at pitches out of the strike-zone, especially those batting from the left-hand side, like Gerardo Parra and Miguel Montero. Through Ross's eight innings, we had only three hits, Pennington's triple and a single, plus a Chavez single, and a walk to A.J. Pollock.

Ross finally left for the ninth, and with Aaron Hill, Goldschmidt and Eric Chavez up, there was still some hope, if we could get things together in an "anyone but Ross" way. However, that trio went down meekly in order, and Arizona were shutout at Chase for the first time this year, putting up a zero for the third time in total. Our hitters went 0-for-5 with runners in scoring position and fanned eight times. If there is a plus to be taken from this game, it's that it wasn't a long, drawn-out defeat. At two hours and 15 minutes, it was the quickest game of the season so far, beating the 2-1 loss in San Diego on June 14, by a couple of minutes. So, you've got the rest of the day off. 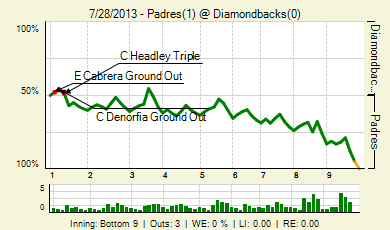 TolkienBard led the commentators in a largely disinterested Gameday Thread - the stranded triple seemed to be irrefutable proof that this was not going to be our day. azshadowwalker and BulldogsNotZags filled out the top three, with others taking part as follows: Clefo, FatBoysEatMeat, GuruB, Jim McLennan, Marc Fournier, blank_38, cheese1213, coldblueAZ, hotclaws, marionette, onedotfive, piratedan7, preston.salisbury, rd33, snakecharmer and soco. Comment of the day goes to Marc, for his sardonic comment, related to the ever-increasing plethora of cable channels:

The Dodgers and Reds are still locked up at zero, and are heading into extra innings, so we may be 1.5 or 2.5 games back, depending on what happens there. The home-stand ends a disappointing 3-4, and after tomorrow's off-day we now face a tough road-trip, through Tampa (two games) and Boston (three), with a bonus make-up game in Texas between those two series. Hard to remain optimistic in the face of that, if we play the inconsistent level of baseball we've provided since the break.