The starting rotation for Arizona has been a mixed bag of results. However, there's one trend that highlights an area where they definitely struggle.

As Diamondback fans this year, the rotation has been disappointing - while there have been bright spots, such as Patrick Corbin, overall, it has not been quite the strength we were hoping for. In particular, neither Kennedy, Cahill nor McCarthy have performed up to expectations, and the result has been a starters' ERA currently 10th-best in the league, at 3.93. A significant part of the cause appears to be batters able to adapt to our starters after they see them more than once. While this is true in general for everyone, the difference between Arizona's numbers the first time through the order, and subsequently, is far greater than normal.

Indeed, even with Kennedy's notorious first-inning issues, the team is good to start with. Their .640 OPS the first time opponents face them, is 44 points better than league-average, and low enough for fourth in the league. They're particularly good at keeping the ball in the park: no team has given up fewer home-runs than the Diamondbacks' 14, over a total of 876 at-bats. However, the next time around, they plummet from fourth to 12th, with an OPS of .737, that's now 34 points below league-average. And third go around? Dead-last: an .880 OPS, over a hundred points worse. In particular, our 32 HR allowed is more than twice as many as first time, and nine more than the next worst.

However, it's interesting to note that it's not something which affects all our starters in quite the same way. Let's break the numbers down for the starters we've used this year. Here are the triple-slash lines for each individual pitcher, split down for the first three times through [there's only 83 PAs for everyone combined for the fourth time, too small of a sample size to break down], along with the numbers for the team overall, and the 2013 National League figures.

For those glazing over at the site of so many numbers, the chart below shows the OPS figures in a more visual format. The dashed line represents the team average, and the dot-dashed one is the NL mark. 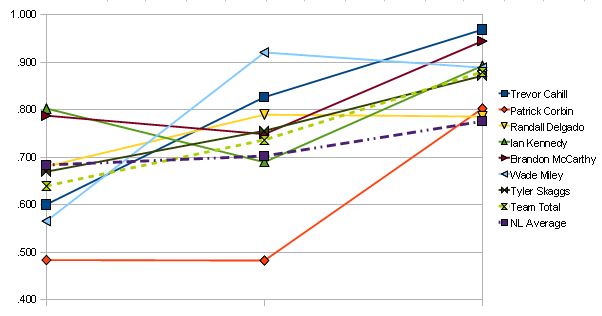 Either chart or table show some interesting numbers. Our first stage success is largely driven by Corbin's remarkable numbers: he has held batters to a .180 average, with just one home-run allowed in 178 at-bats. Miley also has good numbers the first time through. At the other end, Kennedy's problems getting going have been well documented, but Brandon McCarthy is not far behind The difference is stark: both Kennedy and Corbin have made 20 starts, but Ian has allowed 22 runs the first time through the order, Patrick only six. Admittedly, some of this may be bad luck: Kennedy's BABIP here is .378, compared to Corbin's .242.

The second time through, Corbin is every bit as good, but Miley completely implodes, his OPS increasing by 345 points - that's responsible for most of the overall increase, with support from Cahill (+226 points). Delgado and Skaggs are in line with league norms, while Kennedy and McCarthy both seem to settle down and have a lower OPS the second time. However, the third time is when batters really settle in against us: every single one of our starting pitchers has an OPS above NL average there. Delgado and Miley hold more or less steady, but the rest go up by between 116 points (Skaggs) and 320 points (Corbin).

One wonders if there may be a catcher influence somehow, with pitch calling becoming too predictable as we move into the later stages of a game. It could be illuminating to see if the same trend takes place with both Nieves and Montero behind the plate, or if one is more extreme than the other. Unfortunately, there's no obvious way to tell: Nieves' ERA is about 0.40 lower than Montero's, but that may just reflect pitching. Of Nieves' 17 starts, five have been by Cahill, four by Miley, three by Corbin, two each by Skaggs and Kennedy, and one (last night's) Delgado, so hard to be sure. I'd have to check individual pitcher's stats; think I'll save that for another time.

Other possible factors might be stamina: do our pitchers lose more velocity than expected towards the end of their outings? Or do they lack sufficient variety in their repertoire? It's generally considered necessary for starters to have three decent pitches so they can give hitters different looks, while relievers can get by with two or even one (hello, Mariano Rivera!). It's an issue without any obvious solution, but for as long as it continues, never mind the fourth inning, Arizona fans might be better off holding their breath the third time the opposition's lead-off man comes up to the plate.