It was Seventies Night at Chase, and Randall Delgado was as big a hit as disco, throwing his first career complete-game shutout, and also getting two hits, as the D-backs romped to victory.

In the preview, I looked at the WAR accumulated by both sides in the Upton trade, but I think I may have to update those figures after tonight's game, as both Randall Delgado and Martin Prado will have boosted their numbers with their performances tonight. Between them, as well as the complete-game shutout, they went 5-for-7 at the plate: Delgado became the first Diamondback in almost a decade to throw a shutout and have a multi-hit game [the last being Randy Johnson, who one-hit the Rockies on September 14, 2003, while getting one more knock than that, all by himself].

Delgado wasn't exactly what you'd call overpowering. Normally, a shutout like this involves rather more strikeouts than the three which he managed. Of the 44 shutouts in team history which preceded tonight's performance, 42 had more K's: the exceptions, both of which were two-strikeout shutouts, belonged to Miguel Batista in July 2006, and Brandon Webb from July 2003. Both of those had rather more hits - six and seven respectively - and it's fair to say that Delgado had a little help from the BABIP gods this evening. Of the 31 batters he faced, 27 put the ball in play, which would normally result in a lot more than three hits.

Certainly, he was backed by his defense. Two plays stood out in particular: Gerardo Parra's jump at the fence in the seventh certainly saved extra bases, if not a homer, and a sprawling catch from Didi Gregorius that retired the last batter of the game. Still, there's no denying he was very effective, throwing lots of strikes (70% of the 100 pitches) and fooling San Diego with his change-up. It didn't seem likely, after his very first pitch of the night was lined back up the middle for a single, but he then retired the next nine batters faced, and was rarely in trouble of any significant kind. A leadoff double in the third led to the only ABs with runners in scoring position all night for the Padres.

The Diamondbacks offense also showed up in support, right from the start. Things began in the same fashion as last night, with the lead-off man getting on, and being driven in from first by an Aaron Hill double. However, that was only the start this evening, as a Prado single made it 2-0 before the inning was done. An error and another Hill double led to two more runs in the second, though Aaron pulled up lame approaching second. He was lifted from the game and replaced by Eric Chavez for precautionary reasons: Kirk Gibson expects Hill to be rested Saturday, but Aaron feels otherwise: "That's debatable. I haven't got to argue my case yet."

Hill's absence hardly made any difference. RBI hits from Wil Nieves and Cliff Pennington delivered free tacos to Arizona by the end of the third inning - the first time we had reached the mark that early in a game, since we blew out the Marlins 9-2 on May 17. Cody Ross got in on the action with an RBI single in the fourth, then clobbered his sixth homerun to lead off the seventh inning. A little later in the same frame, A.J. Pollock got a bases-loaded single that scored two, and gave the Diamondbacks their first double-digit shutout victory since they beat the Rockies by the same 10-0 score, on June 5 last season.

The 17 hits tied the team mark for a regulation game, matching the number achieved in our 12-4 Cub clubbing on June 1 - and that was on the road, so we got to bat nine times there, as opposed to eight tonight. Seven of the nine starting Diamondbacks had multi-hit nights, led by Prado and Pennington, who had three apiece; the former also picked up our only walk of the game. A couple of omens that usually do a pretty good job of predicting success or failure, failed miserably tonight. Our K:BB ratio at the plate was 8:1, and Paul Goldschmidt was also held hitless. Indeed, Goldie went 0-for-5 with three K's, probably his worst night of the season! 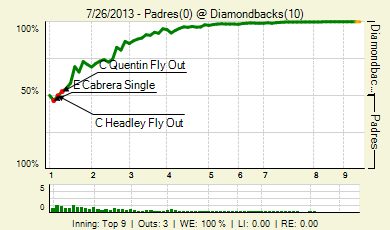 Take a damn bow, every Diamondback involved in this game

Unfortunately, one of the best performance of the year had no real effect on the standings, as the Dodgers squeaked past the Reds 2-1, so we remain one-half a game behind them. However, that doesn't make this one any more pleasant, and considering how we had struggled against San Diego previously - they had won eight of the 12 contests between us already this season - this was certainly an improvement. Tomorrow, Tyler Skaggs takes the mound for the Diamondbacks, with a 5:10pm first pitch, as we seek to win our third in a row.