While the World Series last year was, let's be honest, a Giants-filled suckfest, one thing which was very cool was the ultra-slow motion camera, which captured shots like Hunter Pence's bat breaking. For the upcoming series at Chase, some of the same tech will be present, so we can see the Diamondbacks in detailed, very slow action.

Everything looks cooler in extremely slow-motion. You may remember Discover Channel's series, Time Warp, which ran for three seasons from 2006 through 2008, basically on that entire premise. But technology has improved significantly since: the highest-speed footage then, could only be captured in black and white, but now, you can get similar frame-rates not only in glorious color, but also lovely high-definition. And if you don't believe my opening sentence, check out the video above, which takes things like a running tap or dropping a glass, and turns them into actions of beauty. Or for baseball action, this video includes that Pence clip, mentioned in the intro:

That clip showcases the new Fox Sports slow-mo system, which debuted during the World Series, representing a major enhancement over the existing slo-mo set-up, X-mo. It typically records anywhere from 400 to 1,000 frames per second, but the Phantom Cam can go as high as 5,000 FPS, and that's in HD quality. To put the last figure into context, if you recorded the median D-backs game this season, running a minute less than three hours, and played it back at the normal 25 frames per second, it would take just short of 25 days to watch, non-stop. That's almost as long as a typical game against the Giants, once Bruce Bochy goes into full-on "bullpen management" mode.

After good reviews last fall, Fox Sports have been experimenting with it further this season, giving affiliates around the country a chance to try it out, and the first FOX Sports Arizona slot comes up this weekend. Their executive producer, Jeff Hallas, is looking forward to the experience, saying "I think it's going to give people a better appreciation for the intricacies of the sport. and the mechanics of pitching and hitting." The plan is to have it down by the field near the visitors' dugout. It's somewhat mobile, and can cover the hitter, pitcher, or action on the bases, but can't zoom, so sadly, we won't get anything like Gerardo Parra's face-plant on the warning track, at 5,000 FPS.

As with all new technology it's something where familiarity and experience will gradually lead to ease and comfort. Hallas has been in contact with networks which have already used it, picking their brains as to the best way to take advantage of the opportunity, and understandably, it's going to be handled by one of the channel's more experienced camera operators But at least for now, it's more of an appetizer, like getting to play with someone else's toy while their out of town for the weekend. As the producer put it, "When we get to the third game in the series, we're going to wish we had it longer."

Come season end, Fox Sports will then decide on whether to make it a permanent part of the arsenal: the possibilities are endless, and you can probably come up with your own ideas as to its future use. For instance, I also note Fox used the Phantom Cam for a UFC on Fox show in May, with the impressive results you'd expect from a contact sport. FSAZ already plan to destroy some Dodgermabilia, but it would have been fun to have seen the LA brawl, and every detail of Eric Hinske pummeling poor, defenseless Y*s**l P**g. [What do you mean? MLB's suspensions prove that's what happened...] Or Ian Kennedy plunking Zack Greinke, extended to several minutes.

It will be back for the Dodgers series in mid-September, so who knows, maybe we'll get round two. But it's not just "cool". When the Phantom Cam was in Milwaukee earlier this season, footage of one of their pitchers was shared with the team, and things could be spotted by their pitching coach, which just weren't visible using the regular systems. There's plans to do something similar for the Diamondbacks, particularly on Saturday, though the focus is expected to be more on the team's batters. Hitting coach Don Baylor will get the chance to cast his eye over his charges, and see if anything of use can be gleaned from the new footage.

Another future possibility is its potential with regard to instant replay, as it can provide data to help umpires get calls right. The camera was in operation for last weekend's series between the Royals and Tigers, and saw evidence that could have been used to correct a blown call by the umpires. On Saturday, Billy Butler struck out swinging, with one out in the sixth and runners on the corners in a one-run game, but the Phantom Cam showed he actually foul-tipped the pitch, with dust coming off the end of the bat. And on Sunday, Mike Moustakas didn't get a HBP call, while Phantom Cam caught the dent of the ball flicking his thigh (circled, below). Damn. 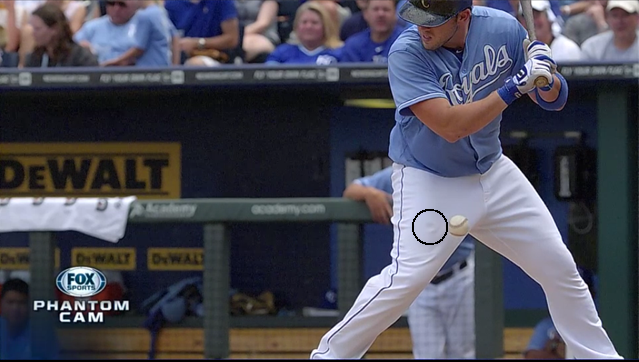 Those kinds of calls are not easy for umpires, and as a strong proponent of Bob Brenly's "RobotUmps", I'm in favor of incorporating this technology, so that you get calls right, with games decided more by the skill of the players, rather than a mistake by the officials. It'd just take an extra man upstairs, with access to the footage, and an ear-piece for the home-plate umpire: such a system would hardly slow the game down at all, by the time you take out a player (and possibly his manager) arguing, being ignored by the umpire, and trudging back to the dugout in slow disdain. The rest of the technology is there: we should be using it - though the umpire's union may not agree...

Finally, even more extreme slow-mo is potentially in the wings for deployment, in the shape of the Phantom v1610, also used by Fox during the World Series. Described as "the BFG-9000 of broadcasting," (I love a good Doom reference!), it can go up to one million FPS, but there's a trade-off between quality and frame-rate, with the camera maxing out at 16 gigapixels per second. For the World Series, it was shooting 1280x720 HD at approaching twenty thousand FPS, which is... a lot. However, a one-second clip of Paul Goldschmidt getting a water-cooler bath after a World Series walk-off is something I would be delighted to watch - even if it took 13 minutes, 20 seconds...

[All three games of the weekend series can be seen on Fox Sports Arizona, with first pitch at 6:40 on Friday, 5:10pm on Saturday, and 1:10pm on Sunday. Thanks to Brett Hansen and Jeff Hallas of the channel for their help.]