The Diamondbacks offense continued to sputter, being held to two hits over five-plus innings by Chris Rusin. Tyler Skaggs was burned by a couple of mistakes which didn't come back, and Arizona slid out of the lead in the NL West for the first time since May 15.

Share All sharing options for: Diamondbacks 2, Cubs 4: Seconds to disaster

Well, that's it. Might as well put away the foam fingers and stow the rattles for another year: the Dodgers have overtaken us. The season is over. Never mind the 63 remaining games: those are just a formality, with Los Angeles strolling to the division title on the backs of their infinite payroll. Time to sell every player earning more than minimum wage for future prospects, and concentrate on tanking the remaining games as hard as we can, so we can get the best possible draft-pick in 2014. Nothing left to play for. Games until the blessed off-season: 63.

Yeah, that's sarcasm, in case you couldn't tell. Certainly, it's better to be in front looking back, rather than in second looking up, and the bottom line is, the team needs to start playing the way we know they can. In particular, this applies to the offense, which has gone more than two weeks since the last delivery of tacos, managing a total of only 28 runs over the 11 games since. And it would probably also help if the teams the Dodgers were playing, starting performing like major-league outfits rather than the Bad News Bears [Really, Toronto: you commit five errors? I'm very, very disappointed in you] Two months left. Anything can happen. And probably will.

Tyler Skaggs was generally pretty good, with his curveball generating a lot of swings and misses, almost regardless of whether or not it was located in the strike-zone. The problems for him seemed to come when he fell behind in the count, and wasn't able to throw quality strikes on the corners. The Cubs did all their damage in those situations. In the second inning Dioner Navarro clubbed a 2-1 offering into the bleachers in left for a solo shot. Then, in the fifth, after the pitcher reached base on a high chopper which took so long to come down, Aaron Hill's flip to first wasn't in time, Junior Lake smashed a 2-0 pitch to center for his first MLB homer.

That was it, however, and Skaggs outing wasn't too bad: six innings, seven hits and no walks, with the six K's. There was also a hit batter: Skaggs plunked Navarro the second time up, prompting home-plate umpire Doug Eddings to warn both benches, in what certainly seemed like a knee-jerk over-reacton, since there was no reason for Skaggs to have thrown at the batter e.g. for showboating the homer or whatever. Of course, Tyler Skaggs is noted around the league as a head-hunter, so Eddings was probably playing safe. Oh, my mistake: that's Ian Kennedy. Anyway, overall, Skaggs was decent. A "quality start" albeit by the loosest definition. The problem was the offense.

Maybe it was a scouting issue? Chris Rusin was only slotted in for the start earlier today, and with 33 innings in the majors, there probably wasn't a great deal of video available. Certainly, the Diamondbacks made him look good: through five innings, the home team managed one hit, an infield hit off the bat of Didi Gregorius. There was also a walk, by Cody Ross with one out in the fifth. This lead to your daily TOOTBLAN, brought to you by <insert sponsor here>. Parra struck a fly-ball to right, Ross didn't wait to see whether or not the ball would be caught. Former D-back Cole Gillespie made a good, but hardly exceptional catch, and doubled Ross off, with Cody basically on third-base.

Trailing by three going into the sixth, things looked pretty bad, but Arizona pulled back within one, scoring a couple of runs in the bottom of the sixth. Gregorius got our second hit of the game - and also his second, both off a left-hander. Admittedly, one was an infield one, and the other a bloop double that benefited for some confusion between the Cubs infield and their center-fielder, but they'll look like line-drives in the scorebook. :) A walk to PH Adam Eaton ended Rusin's night. A.J. Pollock struck out, but the wild pitch advanced both runners, and a Martin Prado sacrifice fly, followed by a Paul Goldschmidt RBI single, pulled the D-backs within one.

They had a chance to tie things up in the seventh. With one out, Ross blooped another double, this one inches inside the right-field line, an a pair of walks loaded the bases. However, Eaton could only fly out shallowly, and after a flurry of moves and counter moves, Eric Chavez ended up flying out harmlessly to center. The bullpen wobbled but didn't break in the top of the eighth: Tony Sipp walked the only batter he faced, and J.J. Putz struggled with his control, coming within a ball of walking the bases loaded with one out. However, he got a strikeout instead, and Miguel Montero fired down to third, getting the runner as the Cubs tried a double-steal, ending the inning.

We also left the tying run on third in the eighth. Paul Goldschmidt picked up his second hit of the day with one out, singling to right. Aaron Hill worked the count full, but struck out on a pitch down [I have to say, he hasn't looked very good of late], as Goldschmidt stole his tenth base of the season. He advanced to third on a wild-pitch, but was left there, as Montero struck out swinging. The Cubs added an insurance run off Will Harris in the ninth, meaning our last hurrah in first place only got the tying run to the plate, Gregorius getting his third hit of the night with two outs. However, Eaton grounded to another former D-back, Cody Ransom at third, and our tenure of first is over, for now. 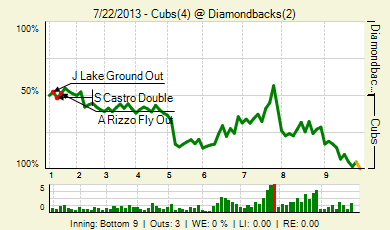 The wave should be a crime.

We really shook the pillars of heaven, didn't we, Wang?

Back to Chase tomorrow night, without the pressure of being the division leaders. Hey, I take my solace where I can get it, thank you... Travis Wood takes on Patrick Corbin, with first pitch at 6:40pm again.