The Diamondbacks offense were almost shut down on a rainy night in New York, and while Patrick Corbin pitched well over the first six innings, it wasn't enough. The Mets scored seven in the seventh, Corbin took his first loss of the season, and our run of starts without a win reached 24.

The Diamondbacks had the first scoring chance, with two outs in the second inning. Jason Kubel singled, and Martin Prado lined a ball to the gap in left-center. But the Mets center-fielder was quick enough to the ball that Kubel - not exactly the most sprightly of runners - had to hold up at third, with Prado on second. That brought up Didi Gregorius, but as the #8 hitter, he wasn't going to be allowed to swing the bat [I hope Gibson was watching this correct use of the intentional base on balls]. Four fingers were put up by the Mets catcher, loading the bases for Patrick Corbin, but he struck out looking, albeit at a borderline strike three at the bottom of the zone.

Both starting pitchers were just about impeccable otherwise, through the first half of the game. Corbin retired 14 of the first 15 Mets he faced, with the exception a two-out single in the second. But Jeremy Hefner was every bit as good for the Mets, with his only base-runner outside the second, a two-out walk to Kubel. But Corbin wasn't able to get the third out in the fifth, before Anthony Recker swatted a change-up - not a bad pitch, in terms of location - over the fence in left center, to give the home team a 1-0 advantage. That was crucial, because the rain was proving increasingly problematic: not directly, but because of the pooling water that was building up on the infield.

The Arizona offense needed to get it going, and they were given a gift opportunity in the sixth after a Met lost a fly-ball off the bat of Miguel Montero in the swirling rain and lights, and it dropped in for a double. However, Cody Ross was unable to drive him in, lining out to right. But Prado did tie things up with one out in the seventh, taking advantage of the brought-in fences at Citi Field in left, with his seventh of the year. Momentum seemed to be swinging Arizona's way, particularly as the Mets ran into the last out on the basepaths in the previous inning, a perfect relay on a double to right, from Ross to Aaron Hill to Prado, who applied the tag at third.

Any momentum proved short-lived, as Corbin was unable to record an out in the seventh inning. Despite coming in with a more than manageable pitch-count (I think it was in the mid-60s through six), he seemed to run out of gas completely, and the first four Mets to the plate all reached, going single, double, RBI single (the ball clanking off the heel of A.J. Pollock's glove in left-center, in a similar way to Parra's crash last night, though with a soggy grass landing for AJ, much less facial damage resulted from the dive), walk. That gave the Mets back the lead, and with the bases loaded and no outs, they were poised to add more, but the umpires huddled and suspended the game.

Things resumed after a delay of one hour, 39 minutes, with Brad Ziegler replacing Corbin on the mound, and inheriting a nasty jam. Ziegler certainly didn't Ziegle - he had only allowed four runners (out of 34 inherited) to score coming into the game, but two singles allowed all three to come in, on Corbin's account, and after a fielder's choice, a two-run double meant the Mets had scored six in the frame while making one out, and had blown the game open. After posting a 1.88 ERA through the end of June, Ziegler's two July outings have resulted in five hits and a walk in one inning of work, and more earned runs allowed (four) than all May and June, covering 22.1 innings.

The rest of the game pretty much was played out more as a token gesture than anything. Chaz Roe got to come in for mop-up work in the eighth, and allowed a run on two hits and a walk, though was helped out by a double-play. In the bottom of the ninth, we got to see Brandon Lyon, who pitched for us from 2005-08, and whom I had presumed was out of the game. Apparently not. Kubel and Prado each reached base for the third time: Jason had a single and pair of walks, while Prado finished a triple short of the cycle, but the Mets, who came in to the game with the lowest batting average in the NL (yes, even below the Marlins), had twice as many hits as the Diamondbacks tonight. 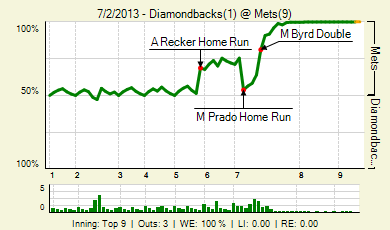 Probably the best thing we can say about tonight is, at least we're not the Giants, who were no-hit by the Reds, and have dropped into the cellar of the National League West as a result. The Padres and Rockies also lost, so our lead continues to hang around for another couple of days, still sitting at 1.5 games. We continue the series against the Mets tomorrow, and it promises to be a tough challenge for our offense, as we face a likely Cy Young contender, in Matt Harvey. First pitch is again a little after four, Arizona time.