The D-backs reach the All-Star break in first place, but couldn't end with a win, as the Brewers avoided the sweep at Chase Field. Ian Kennedy took the loss, dropping his record for the year to 3-6.

Ian Kennedy gave up 3 runs in the first inning, 1 run in the second inning, and after a clean 3rd & 4th inning he allowed another run in the 5th. Enough said. The Diamondbacks packed their vacation bags - including their bats as Milwaukee's Wily Peralta struck out 8 giving up only 1 run on a Miggy homerun in the 5th inning. Dbacks lose in an uneventful manner 5 to 1.

On the bright side (of life), newly recalled from Triple A Reno, Eury De La Rosa pitched 2 strong innings of relief striking out 3.

Side Note: Gibby makes an unusual move and takes an early trip to the mound to scold IPK. Ian Kennedy believes he has the right to claim himself the Dbacks "Ace". Slotted as the #1 pitcher, 2 years removed from from a 20 win season yet, if there weren't 25,057 people watching, I believe Gibby would have pulled Kennedy's pants down and spanked him like a 2 year old. Kennedy pitched like a spoiled child wanting more candy.

I'm the Angry Saguaro and I watch baseball, MLB & MILB 24/7 and have plenty of angry opinions & beer talk. I'm willing to start a Dbacks "Beer & Trader Post" during the All Star break if interested...up to my boss Jim. Let me know-I'll work the boards 24/7. Comment of the game to preston.salisbury tor this classic:

I guess Gibby has decided this one isn’t going extras.

Will buy dinner for next D-back to convert 10 straight save opportunities.
Disclaimer: When I use #Grit, assume sarcasm 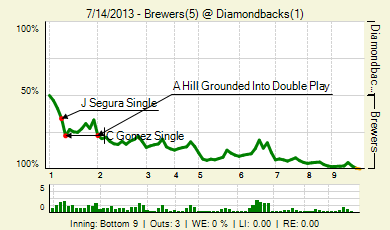 Kennedy managed to suck the life out of the Gameday Thread earlier, with a lot of people understandably deciding they had better things to do after the three-run first. JoeCB1991 led the way, ahead of preston.salisbury, soco: those were the only three even to reach 20 comments today. Present in smaller quantities were: 4 Corners Fan, Angry_Saguaro, Clefo, D-Back, EzioExManAZ, Fangdango, Gravity, GuruB, Jim McLennan, , Majabe, Rockkstarr12, Stumpy657, UAwildcats, alphadrew88, asteroid, azshadowwalker, cheese1213, coldblueAZ, cole8865, hotclaws, onedotfive, piratedan7, txzona and xmet. Mr. Saguaro picked the CotD above, but an honorary mention to joe:

That's it for meaningful games until Friday. The Rockies have completed their defeat of the Dodgers, so we are 2 1/2 up at the break. Don't go away though, as there will be lots of stuff taking place during the break, including Gameday Threads for the Home-run Derby and All-Star Game. And don't forget the SnakePit Video Roundtable at 8pm tonight, with your host, Clefo.