There's something to be said for a game where the lead could vanish with any swing of the opponent's bat. But the thing to be said is probably, "Let's not do that again for a while, please."

Share All sharing options for: Diamondbacks 2, Brewers 1: The Longest Night

Yeah, how the hell did the Diamondbacks come away with the win in this one? The answer is, they took advantage of a couple of errors at the beginning of the game, scratched across a couple of unearned runs, and then held on the rest of the way, as a procession of visitors made their way around the bases, only to stall in scoring position. Milwaukee went 1-for-12 with RISP tonight - and even that hit failed to score a run, coming with a man on second and giving them runners on the corners to start off the seventh. But they couldn't score from the first and third, no out situation, leaving the bases loaded instead. Nice to be on the receiving end of that for once.

The game started off with the team exchanging presents, each side gift-wrapping a run for the other in the first inning. Patrick Corbin allowed a one-out single, which was then bunted over to second - however, Corbin then uncorked a pair of wild pitches, which allowed the runner to score. After having only four of those in his first 18 outings, Corbin had three wild pitches tonight: perhaps more relevantly, that gives Miguel Montero 33 of those behind the plate, before we even reach the All-Star Break. That already surpasses his tally for all 2011, when he had 30, and is closing in on 2012's tally, of 38.

Milwaukee were kind enough to reciprocate in the bottom half, however. After Adam Eaton singled to get things going, one out later, starter Tom Gorzelanny uncorked a wild pickoff throw which let Eaton scamper around to third. Paul Goldschmidt took advantage, grounding out to drive in his 77th RBI of the year. More defensive hi-jinkx gave us the lead in the second: with two outs and Cody Ross on second, Cliff Pennington hit a sharp one hopper to the Brewers' 3B, who tried to backhand it, but only ended up deflecting the ball into the no-man’s land of foul territory, and Ross scored all the way from second. [Hat-tip Dallas D'Back Fan for the description!]

And that was it. 13 scoreless half-innings followed, and the Diamondbacks ran out victors. Funnily enough, it wasn't quite as easy as that. Our offense didn't exactly help. After Ross's single leading off the second, we sent two batters over the minimum to the dish from there until the bottom of the eighth. The only hit was a Goldschmidt double with one out in the sixth, and he was erased on an attempt immediately afterward to steal third - the Brewers got a break on the call, as the tag appeared to miss Goldzilla. Pennington's bunt single led off the eighth, but A.J. Pollock fell just short of a two-run homer to close the book on our offense.

After the wild first, Corbin settled down fairly nicely too, though the fifth was his only clean inning - not helped by an apparently abstract strike zone. He stranded a man on third with no outs in the fourth. But the seventh was truly Houdini-esque, as noted above: he put men on the corners with no-one out, and got another K, then got lucky with a bunt attempt that went foul, but in the air, allowing Goldschmidt to snag it for the out. He issued his second walk, and that was it. His final line: 6.2 IP. 7 H, 2 BB, 10 K, just the one earned run, and 113 pitches thrown. Another excellent outing with his curve apparently working especially well, in addition to the usual slider.

Those who wanted to see Will Harris in higher-leverage situations got their wish, as the reliever came in with the tying run on third. But he was up to the task, striking out Carlos Gomez with a full-count pitch. The eighth was even more dramatic, as the unholy trinity of J.J. Putz, Tony Sipp and Heath Bell combined for a buffet of digestive stress. Putz got the first two outs, but put two men on. Birthday boy Sipp was called on to face the left-hander, and walked him, loading the bases again. Bell then arrived, got ahead 0-2, but then let the hitter bloop one into center. Fortunately, Pollock showed his excellent range, running in to make a diving snag that undeniably saved the game.

David Hernandez pitched the ninth, and it was remarkably without drama, as he retired all three batters faced, on a fly-ball and two strikeouts. It appears to be only the second 1-2-3 ninth inning to save a game for Arizona this year - the first was by Heath Bell, against the Dodgers on May 7. It was interesting to see him in the ninth, and not J.J, but Putz appears still to be a little short on velocity, with his fastball hovering around 90 mph for most of this outing, which is definitely lower than it should be. Will we see more of Hernandez going forward? Only Gibby knows for sure... 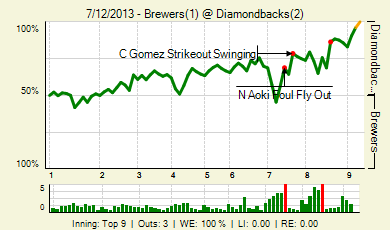 The Gameday Thread was...interesting. We laughed, we cried, we discussed the morality of commentators picking out hot chix at the ballpark. TolkienBard and BulldogsNotZags tussled for the top spot, the former coming out ahead by a couple of comments, with Clefo in third. Also taking part were AJV19, AzRattler, Baseballdad, EzioExManAZ, GuruB, Jim McLennan, Rockkstarr12, Stumpy657, The so-called Beautiful, TylerO, UAwildcats, asteroid, azshadowwalker, benhat, coldblueAZ, cole8865, hotclaws, piratedan7, preston.salisbury, snakecharmer and soco. As often, I award Comment of the Night to woefully-inaccurate pessimism, this coming at the start of the ninth.

Hahaha! Wrong! Everyone laugh and point at Debbie Downer! Thank you for your co-operation. In fact, with the win, and the Dodgers being shutout by the Rockies, the D-backs extend their lead in the NL West back to 2.5 games, which means we are now certain to be in sole possession of first place until at least next Thursday. But, really: if we're going to win, I wouldn't mind if we were able to do so in a less stressful manner.