Remember that game in NY where the jackass ballhawk snagged a ball, but the D-backs still prevailed? This felt a lot like that, in the end: a horribly-blown call by third-base umpire Jordan Baker helped the Cardinals force extra innings, but the baseball gods saw fit still to give Arizona the win, Paul Goldschmidt driving in the winning run in the 14th.

I accept that MLB umpires are, by and large, pretty good at their job. But there are exceptions. And when those exceptions blow calls so utterly badly, as Jordan Baker did in the sixth inning tonight, there seems little or no credible argument that better systems of both instant replay, and umpire accountability, need to be put in place. It's far more by luck then good judgment, that the final result of this one mirrored what "should" perhaps have happened - though it took an awful lot longer to get there. But if we had lost this one as a result, which was a genuine possibility, and if we went on to miss a playoff spot by one game... No: something has to be done.

I'm afraid I can't say too much about the early going here: this is a pinch recap, because BattleMoses has been taken poorly, and I'm filling in. But I think it's safe to say that the expected pitcher's duel, between two top prospects in the shape of Tyler Skaggs and Michael Wacha, didn't quite materialize. Instead, they combined to be charged with 11 earned runs in 10.2 innings, on 16 hits, including three home-runs. Admittedly, Skaggs didn't get help from the others on the field - not just Baker, but Gerardo Parra, who made a futile dive for a leadoff hit in the first, which became a triple that scored, rather than eating it for a single.

At that point, I went to dinner, watched a bit of Supernatural and casually flicked the game back on later, so see Arizona leading 6-4. Apparently, I had missed Skaggs tying the came up with an RBI single, A.J. Pollock giving us the lead with a three-run shot, his fifth home-run of the year, the Cardinals coming back with a two-run blast of their own, RBI hits for Paul Goldschmidt and Jason Kubel, and the home team pulling back another run in the fifth with another long-ball, this time a solo shot. I arrived just in time to see see Beltran single, and he tagged up and advanced smartly to second on a deep fly ball to the warning track.

After a strikeout, it was the next play which will forever define the game. Beltran took off for third, the throw down from Miguel Montero beat him easily, and the tag was applied by Martin Prado, as shown at the top of the article, but minor-league replacement umpire Jordan Baker, perfectly positioned to make the call, said Beltran was safe, when it should have been the end of the inning. Prado started to argue, Kirk Gibson came out there to act as arguer by proxy, and at some point - it might have been between innings - Arizona bench coach Alan Trammell got himself ejected. It was a horrible call, one that required no replay to know it was wrong: replays only made it worse.

Of course, there's no way to know what might have happened, had the call been correct, and the Diamondbacks had gone into the seventh inning with a two-run lead. But what actually happened is, the wrongly-extended inning certainly resulted in the Cardinals scoring another run, when the hitter singled to bring Beltran home. That was it for Skaggs, whose second outing went considerably less well than his first. His final line was 5.2 innings, five runs allowed on six hits and no walks, with four strikeouts - though between Parra and Baker, you could make a good argument that two of those runs were "unearned."

This also led to the D-backs having to cobble together their bullpen for the rest of the night. Brad Ziegler, David Hernandez and Will Harris all had to come in during innings with runners on base. Coming back out for the seventh, Ziegler allowed the tying run, before giving way to Hernandez, who got two big fly ball outs with the go-ahead run in scoring position. He then worked a scoreless eighth, and the pairing of Tony Sipp and Harris then put up a zero in the ninth, though not without some drama there too, Harris getting Allen Craig to swing at ball four and ground out, again with the go-ahead run on second.

Arizona had their chances in extra innings, putting the leadoff man on board in both the tenth and eleventh. However, Prado hit into a double play in the tenth - I'm beginning to think that putting an extreme contact hitter in the line-up, immediately behind the slowest runner on the team, might not be a good idea - and Pollock couldn't get the bunt down in the eleventh, which helped lead to Willie Bloomquist being stranded on first, after getting his fourth hit of the night, and his ninth in just three games since coming back off the DL on Saturday night. He had only 18 in the first month of the season last year.

Josh Collmenter took over for the Diamondbacks in extra innings, and did sterling work in long relief, keeping the Cardinals off the board for four frames, on four hits and a walk with five strikeouts. That he was out there for the duration became clear when he hit for himself in the top of the 13th, with Heath Bell the only reliever left in the D-backs bullpen at that point. You probably remember his last uber-long outing: I'm sure the Cardinals do, since it came against them on April 3, when Collmenter worked five innings and got the win, as the Diamondbacks prevailed 10-9 in sixteen innings.

This one had a similar result. The Cardinals were down to their penultimate reliever too [they only had former D-back Randy Choate left, save tomorrow's starter Joe Kelly], and he was wild, walking Cody Ross and Didi Gregorius. That's a dangerous tactic in front of Goldschmidt and so it proved, with Goldzilla punching his third hit of the night back through the middle for the go-ahead run. That would be it for the Diamondbacks, as Montero struck out, swinging at ball four, and Martin Prado grounded out. It was time for Arizona to turn to their last reliever, Heath Bell. If he hadn't been able to get it done, we'd probably have seen Josh Wilson pitching...

And, the initial signs weren't good, as Bell allowed a leadoff double. Speaking of previous outings against the Cardinals, I couldn't help remembering that Bell's first appearance this year, was his meltdown facing the very same team. Did they know something we didn't? Was he tipping his pitches? However, Bell has also spoken about how he becomes a totally different pitcher with runners in scoring position, becoming much more aggressive. Such was the case here, as he went strikeout, ground-out, strikeout, to strand the tying run on second, and return Wilson to Defcon Three. With the bases empty, opposing hitters vs. Bell are now batting .378; with RISP, it's .231.

The D-backs thus prevailed, albeit in a rather more roundabout way than one feels they should have done. If we had lost this one, it would have been the kind of game that left a severely unpleasant taste in the mouth, so I'm glad that's not the case, even if my planned viewing for the evening remained unfulfilled, being pre-empted by an overwhelming desire to see certain sporting officials go DIAF. However, even that blind rage has now mellowed, and I can sit here, listening to the happy Swedish techno, with Arizona having split the first two games of this tough series. 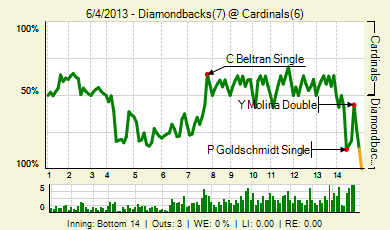 A lot of numbers there. I'm awaiting official confirmation [B-R.com use slightly different WPA numbers], but that appears to be the second-highest ever WPA by a D-backs reliever, trailing only 54% from Brandon Medders, who worked three hitless innings, the 16th-18th, at Coors in August 2006 [in case you're wondering. Collmenter's earlier stint did involve a run allowed in a tied game, which cost him a lot of WPA]. Conversely, Prado, who went 1-for-7 with a double-play and six left on base, and Parra (0-for-7) provisionally had the two lowest WPAs of any Arizona batters this year, with no-one else having reached -25% this season. Just glad we still won!

No question about the Comment of the Thread too, which goes to Xipooo for this bit of graphic brilliance.

Robot umpires, because even a drunk sociopath would be better than Angel Hernández. 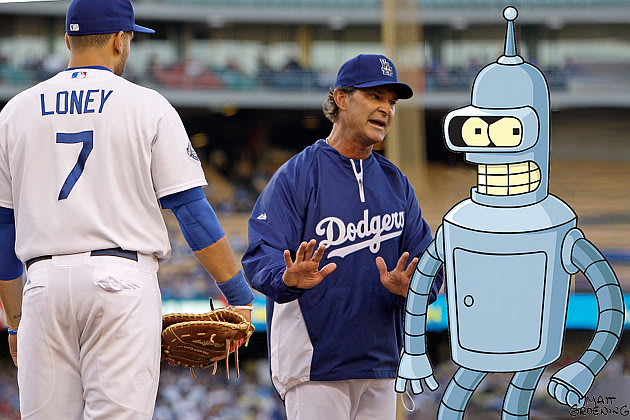 Wonder if I still have time to watch The Wicker Tree? Dammit, guess not. Oh, well. We're back at Busch Stadium, with Wade Miley taking on spot-starter Joe Kelly. Pretty sure both pitchers will be left out there until their arms drop off, consider the bullpens tonight combined for 17.2 innings of work and 282 pitches (150 D-backs pitchers, 132 Cardinals). We might be in better shape, thanks to Collmenter, as Sipp, Harris, Bell and Reynolds all threw less than 20 pitches tonight; for St. Louis, only unused Choate is in that rested state. We'll see how it works out!