When the sum total of your productive offense for the afternoon consists of grounding into a pair of double-plays, there's not much more that needs to be said.

Share All sharing options for: Diamondbacks 2, Braves 6: Well, that sucked.

Diamondbacks took a lead in the first but it didn't last long. The Braves tied the game in the second, put up three in the 3rd, and never looked back. A 2-run homer in the 5th ended Cahill's night. Collmenter relieved him and pitched 2 2/3 of scoreless ball. Dbacks scored one in the 6th and loaded the bases with one out in the 7th to no avail. The rest of the game was fairly uneventful: Harris, and Sipp came in and put up 0's through 7th and 8th respectively and that was it. Dbacks finish June 12-15 and are 1-5 on the current road trip.

Cahill started the game well with a great outing in the first, then got dinged by a single shot in the 2nd and things got bad in the 3rd with a 3 run blast, coming immediately after Justin Upton just legged out what would have been an inning-ending double-play. Cahill managed to get out of the fourth cleanly, and I thought, "Hey maybe he's figured it out again. We're over the bump he'll get it together." I was wrong. His day came to an end after a walk and home run to make the game 6 to 1 after 4 1/3.

Collmenter came in and proceeded to scare us all, walking the first two batters he faced. Collmenter then struck out Maholm, but a Nieves pick off attempt ended up rolling down the 3rd base line allowing BJ Upton to advance to 3rd. However, Nieves made a catch on a foul ball that ended that inning preventing his error from biting us again.

We got a great performance from our bullpen today. Sadly, a great bullpen performance isn't all you need when your down by 4 and the offense couldn't get it going. AZShadowWalker summed up my feelings about about our starting pitching staff perfecly.

"That may be true.
On the other hand, I can't help thinking that when we keep excusing these big innings by simply saying, "They hit good pitches," we aren't really saying anything. The team continues to lose by having "good pitches" hit or by "just making one mistake that got hit out". It may make the players and fans feel better, but when those pitches keep getting hit, we have to start to wonder if maybe they weren't so good after all.

This is I believe, our 22nd game in a row without a win decision for our starting pitchers, which is a travesty. Our offense doesn't seem to come alive until the end of the game - or at all today. But when you're playing an offesnive powerhouse team like Atlanta, you can't wait until the 7th to try and win game. We've got to score more runs earlier in the game, both to support our starting pitchers and to leave us with odds that are more in our favor towards the end of the game.

We might have dropped the series, but there is one thing to be happy about, we don't have to listen that stupid chant anymore. Hopefully we can put on a good showing in New York, and get July started off with a bang. We've got a lot of home games this month and the All-star Break to get everyone rested. We're officially half way through the season and personally while I'm dissapointed about the last few games, I'm really happy with where this team is right now. It's still first place, no matter how small the lead is.

I feel like I should be angry and fired up about these last 6 games, but I just can't get that way. Teams struggle through the season, and this has been our struggle. (Notice, the hopeful past tense there?) Hopefully, it ends here and we can build up our first place lead again. We have four series in our division next month and every one of those games is important. 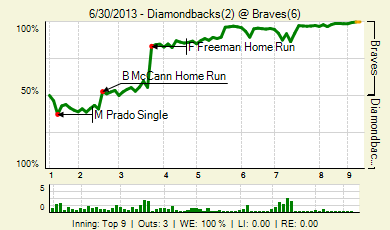 Rockkstarr12 led the commenters in a GDT which largely has the wind sucked out of it by the three-run homer. TolkienBard and Fangdango finished second and third respectively, with the others showing up being: AzRattler, BulldogsNotZags, Clefo, Diamondhacks, GuruB, Jim McLennan, JoeCB1991, John Baragona, Majabe, Scott Howard, The so-called Beautiful, Zavada's Moustache, asteroid, azshadowwalker, benhat, cole8865, dbacks79, dbrowell, hotclaws, onedotfive, snakecharmer, soco and xmet. Comment of the Thread was as above. Arizona now head in to New York for four against the Mets and would need a sweep to even the road-trip record.