Remember how we chortled heartily when St. Louis outscored San Francisco 15-1 over a double-header this weekend? Not quite so funny now, is it? So ends my five-game victorious recap streak.

Blegh. This isn't going to be a detailed game recap, because this isn't the sort of game any Diamondbacks fan wants to read about in depth, and it's a contest best consigned to the garbage can of this season. In any given year, just about every baseball team will win sixty and lose sixty: their fate is largely determined by what they do in the others. This one, however, had the feel of one of those sixty defeats, with just about no aspect of Arizona's performance clicking. Still, probably better to get all the suck out of our system in one festering contest, rather than spreading it out over a series of close games.

Trevor Cahill's ongoing series of wobbly starts, noted in the preview, continued with what was probably his worst of the 2013 campaign to date. He wasn't helped by a strike-zone from home-plate umpire Jordan Baker that should have come equipped with a tube of petroleum jelly, nor by a BABIP for the evening of .391. But the truth is, Cahill didn't adjust as he should have done. Perhaps more worryingly for the long-term, he seems to have lost the ability to strike people out. His past three outings, covering nineteen innings, he has a K:BB ratio of 5:5; tonight he had three walks, without striking out any of the 26 batters faced, including the pitcher twice.

Only one other Diamondbacks starting pitcher since 2007 (when, you might remember, Livan Hernandez was doing his Hernandez-esque thing) has worked five or more innings and failed to record a single K. In June 2009, Jon Garland faced Texas and threw 6.1 innings of strikeout-free ball. I know there's something to be said for pitching to contact, especially for sinker-ball pitchers, but even they need some strikeouts, because otherwise the BABIP bear will get them, sooner or later. The more balls get put in play, the greater the number of hits. Time to worry about Cahill? Perhaps. Puts him in line with just about everyone else in our rotation, one way or another.

Arizona had some chances to make an impression early, putting their lead-off man on the first couple of times they were up. However, in the first, Parra's single was followed by consecutive K's, which at least saved Parra from having much of a trot back to the dugout. The second was worse still, as was might have been a botched hit-and-run, or a well-guessed tactical decision by the Cardinals, led to Cody Ross being caught stealing second after his leadoff knock. That gives Arizona only 20 successes in 38 stolen-base attempts, which is a rate that ranks us dead-last in the majors, and symptomatic of a running game which has been woeful all year.

We didn't get a runner safely past first-base until Parra doubled to lead off the sixth inning. He advanced to third on a sacrifice fly and came home safely on a hard smash by Paul Goldschmidt to first. That did two things: it extended Goldzilla's lead at the top of the RBI leaderboard (yeah, I know: RBI. But anything that helps him get the ASG nod he deserves is worth promoting). And it extended the Diamondbacks' streak without a shutout to 64 games, best active run in the majors (the Reds are next, at 34). Admittedly, we have now scored exactly one run 11 times this year, also most in the majors...

Randall Delgado made his Diamondbacks debut in relief of Cahill, and allowed a two-run homer to the third batter he faced in an Arizona uniform. He worked two frames, allowing four hits and two runs, with three strikeouts, and will no doubt already be on his way back to Reno, with Tyler Skaggs replacing him on the roster tomorrow. There was also a bit of confusion when both he and Goldschmidt tried to cover first-base for the return throw from second on a double-play attempt. The ball ended up going between them, but I'm glad this wasn't a close game or I'd have been kicking the puppy or throwing things at the TV. Possibly the puppy. Oh, look: and there we go.

Will Harris worked a scoreless eighth, and Willie Bloomquist legged out an infield hit in the ninth, to join Parra in the multi-hit game club. That's about all I've got. There's something to be said for the occasional low-impact blowout like this, where we weren't in from about the third innings. Don't get me wrong, I don't like losing, but it's a good deal less stressful than games where the lead could evaporate at any moment, especially when it does. If we're going to lose, games like this would be my preference. 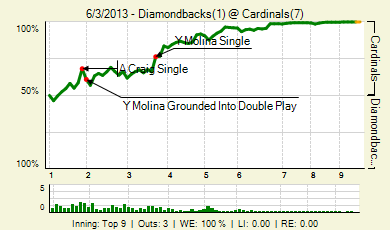 In the discussion of Miggy's BABIP,

He had some Koz to complain there.

Paul Goldschmidt looks at Tim Lincecum and says "We are going to foxtrot, and I will always lead."
-Clefo

At least the Rockies lost too: the Giants were idle today. Tomorrow night's game should be an interesting one, for the second time in a row, our young pitching prospect Tyler Skaggs takes on the opposition's top young pitching prospect, in the Cardinals' Michael Macha. Look forward to seeing what we do there, and hopefully all aspects of our game will be significantly improved.