The game opens loudly with a miraculous double by Willie Bloomquist, however the next 3 batters go down in order to end the top of the 1st. The game is pretty quiet until the bottom of the 3rd inning when Kurt Suzuki leads off the half inning with a walk. Gio Gonzalez advances the runner with a sac bunt and Denard Span hits a single to center that scores Suzuki to make the score 1-0 in favor of the Nationals. Anthony Rendon hits a single as does Jayson Werth. Werth's single scored Spand and moves Rendon over to 3rd to make the score 2-0 in favor of Washington. Adam LaRoche hits a 3-run Home run to make the score 6-0 in favor of Washington. The game slows once again until the bottom of the 5th, when Jayson Werth hits a leadoff double and LaRoche singles. Ian Desmond hits a sacrifice fly to right field and scores Werth to make the score 7-0. Chad Tracy and Roger Bernardina make two quick outs to end the inning. Bloomquist starts the inning off with a line out and Aaron Hill gets a double. Paul Goldschmidt hits a single to right as does Montero. Montero's single scored Hill to make the score 6-1. Cody Ross and Parra make two outs to end the top of the 6th. The game quiets down for a half inning until the top of the 7th when A.J. Pollock hits a single. Cliff Pennington and Bloomquist both make ground outs but they advance Pollock to 3rd. Aaron Hill walks and Goldschmidt hits another single that scores Pollock to make the score 6-2 and extends Goldy's lead in most RBIs for a National League player. Montero reaches on a fielding error by Rendon and Hill scores to make the score 6-3. Not much happens in the bottom of the 7th other than a couple of hits from LaRoche and Rendon. In the top of the 8th Martin Prado leads off with a solo home run to make it 6-4. The Dbacks go down in order after that. More scoring takes place in the bottom of the 8th when Steve Lombardozzi scores on a missed catch error by Brad Ziegler. Bloomquist and Hill leads off the top of the 9th with a couple outs. Paul Goldschmidt singles on a line drive to center. Miguel Montero Hits a single as well and scores Goldschmidt to make the score 5-7 but Martin Prado grounds out after a Cody Ross single to end the attempted comeback and the game. 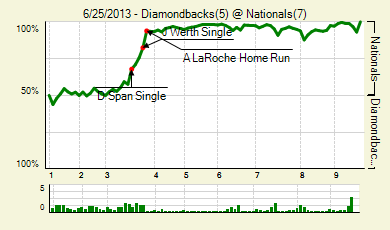