Hooray! We see one player check out with a clean bill of health, and there are no new admissions this week. Hopefully, it's a trend that will continue, and the news is mostly good for our walking wounded.

Chavez is feeling good as he recovers from a torn oblique muscle suffered at the end of May, saying, "Everything has been good -- hitting, running, throwing. I didn't know really what to expect, but [it's] gone really good." Chavez could start a rehab assignment this week, and doesn't think it will take him long for him to get back to his pre-injury form: "It will be more how does a check swing feel, how does a swing and miss feel, how does a 2-0 swing feel, all that stuff more than my timing. It doesn't take me long. I've only been out three weeks or whatever, so it's not going to take long." When he is, it could make for an interesting roster decision.

Eaton still seems a little bit from being able to play the outfield again, likely the main stumbling block, as he makes his second come-back from the elbow injury which has kept him out of major-league action for the entire season to date. The last report said he has been swinging the bat without difficulty, playing catch and appearing as the DH in extended spring training at Salt River Fields, and said, "Everything feels good. Feels back to where I was. It only hurt that one throw and I felt great before that." The current estimate is another week or so, and he'll perhaps then be ready to cover all aspects of the game.

Hill completed his recovery from a surface fracture in his hand, suffered when he was hit by a pitch on April 14. He went on a rehab assignment with the Reno Aces, and seems 100% well, going 9-for-24 (.375) with a double and a triple in six games. As Clefo reported yesterday, the team has already made the roster move, optioning left-hander John Paterson to make room for Hill, though the true corresponding move happened earlier in the week, with Josh Wilson being DFA'd to open up a spot on the infield. Said Hill, "I got the amount of at-bats I wanted, so I'm good. It's all about how you feel. Hits are always nice...but you know when your swing is there and feeling good." 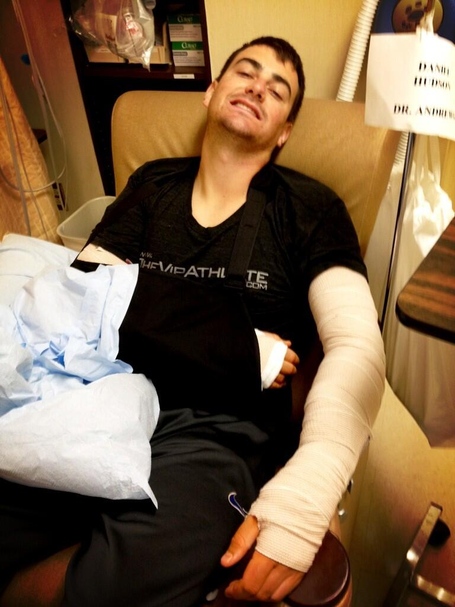 If the above picture doesn't make it clear, Hudson underwent the second Tommy John surgery on June 18th. Both arms are bandaged, because the replacement ligament for the right arm was taken from the left elbow this time. The second rehab starts here, but what clearly wasn't injured in the process was Hudson's sense of humor:

Kept busy operating as the D-backs ambassador on Twitter during Puig-gate, but otherwise, there's not a great deal of recent news regarding his recovery from the right shoulder inflammation which has shut him down for the entire month of June. The most recent nugget I could find, had McCarthy playing catch at a distance of 105 feet on flat ground,. but that was a week ago. Current treatments for Brandon include "a light game of catch, postural exercises, lower body workouts and therapy treatments." It seems like we are still looking at a return before the All-Star break, if things go according to plan.

Likely the next name off the list, Putz is currently going through his rehab assignment with the Aces. That began last Wednesday, with an inning on which he allowed a run on a pair of doubles, but his second outing was much better, striking out the side around a walk on Friday night. The next step is for him to work back-to-back games, and see how his body reacts to that, which should happen today and tomorrow. According to manager Kirk Gibson, "We'll get him back-to-back and see how he's feeling. We're going to wait and see how he's throwing, how healthy he is, and we'll see what else is going on in our bullpen as well," but a return during the upcoming road-trip seems probable.

A UCL tear is never good - after all, it's what got Hudson started on his long journey - but the consensus is that Reynolds should be able to recover through rest rather than surgery. If that's true, his 2013 season would not be over, but it's uncharted territory for the reliever, who had not been on the disabled list since coming to the majors. He said, "I had been getting some treatment on it. It felt a little achy and was getting some treatment and felt it was almost out of there, and then it started coming back a little bit." He's got around another four weeks off before anything more happens, but "Hopefully I can just wait around, rehab it for a little while and be good as new."