Star Wars day at Chase did not have the result we were looking for, as the Reds averted a sweep at the hands of the Rebel Alliance D-backs, with Arizona struggling to solve Mat Latos. Guest recapper ojcarrasco takes us through this afternoon's action.

The Reds started well with a lead-off homerun by Shin-Soo Choo off Randall Delgado, and a two-run homer the same inning by Brandon Phillips. Randall Delgado pitched 5 innings before being taken out. with the D-backs having two runners on base with one out when his spot came up in the bottom of the fifth - however, PH Eric Hinske struck out. Matt Latos was dominant with 13 strike outs in 7.2 innings pitched. Once Latos was taken out the Diamondbacks began their comeback, scoring one in the eighth and one in the 9th, but Willie Bloomquist flied out with two (including the tying runner) on in the ninth.

The Diamondbacks could not get anything going off Latos. One day after striking out only once, they struck out 13 times, with 9 runners left on base and only 2-10 with RISP. Randall Delgado made some mistakes early, but calmed down and was effective at run prevention with 4 groundouts in his final 3 innings. After giving up a run on a sacrifice fly, Delgado calmed down the next three innings. In the top of the 5th, Pollock made a nice catch and throw getting Votto trying to advance on a softly hit fly and TOOTBLAN (thrown out on the basepath like a nincompoop)

I think Delgado got a reputation as a top prospect due to a great 2010 at Myrtle Beach, and then has had flashes of decency with some bad games (see his season at Reno so far) but the skill is there. He may be a decent back end of rotation guy; his fastball was still sitting at 92 after 78 pitches. The dbacks took him out as they had runners on base and runs at a premium, using Tony Sipp and new guy Zeke Spruill (better known as possibly the best guy we got for Upton)

Overall, the series went well. Taking two of three from one of the top teams in the league is not too shabby, and help is on the way, it seems Hill is done at Reno and coming back up (could have been him instead of Bloomquist), and Eric Chavez should be on his way at the end of the week.

We are seeing positive signs for Miguel Montero, he has improved since May, when he hit a .198/.270/.321 slash line, for June he is hitting .273/.355/.348 which is closer to his norm (minus the slugging). The slash line also shows that his OBP is higher than his slugging (a rarity, but partly due to small sample size) which means not as much power, just trying to get on base. This is a good sign. During his struggles this season it seems he has been swinging out of his shoes trying to hit a homer, now he is just trying to get on base.

I was happy to see Zeke Spruill I think he is going to be known as the best player the Diamondbacks received in the "player who must not be named" trade with Atlanta. He is not a strike out guy, but he gets outs and he has handled moving from Mobile to Reno to Arizona and from starter to reliever well. The ability to handle change and come in anytime is a good indicator.

I should finish by mentioning - because I think the team will hunt me down if I don’t - the Diamondbacks still have not been shut out this season. Why that matters, I do not know, but it seems catchy. 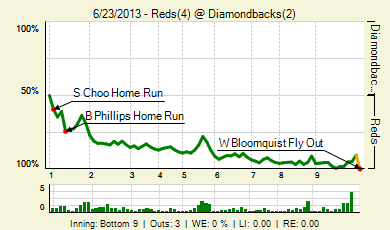 They had similar graphics on the Jumbotron at the game for all the D-backs players this afternoon. I think the one of Gerardo Parra as Yoda was my favorite, though Didi Gregorius as Lando Calrissian was also pretty cool.

Thanks to the Padres and Giants both losing, our lead remains unchanged at three games in the NL West, but there is now only one-half of a game covering both those two sides and the Rockies. The Diamondbacks have tomorrow off, then head into the NL East for a ten-game road-trip, which sees them taking on Washington, Atlanta and the New York Mets. Hopefully, they will still be in first the next time we see them at Chase.