Nice to see the offense step up and get it done yesterday, against an opposing ace and on a day when our starter wasn't able to pitch deep into the game. Another tough challenge today though, in the shape of Mike Leake.

Share All sharing options for: Preview: Game #74, Diamondbacks vs. Reds

The Diamondbacks may no longer be undefeated when Corbin starts - the Marlins saw to that in the opening game of their series - but our starter himself has yet see the L by his name in the box-score, getting a fourth chance to run his record to 10-0 this afternoon. And this one will be on national television to boot - though as usual, "on national television," and "watchable on national television" are two entirely different things. For Fox now has no less than five games going on simultaneously, and obviously, only one will be screened in any given area. After some digging, I found this map, which lays out where each game will be shown. 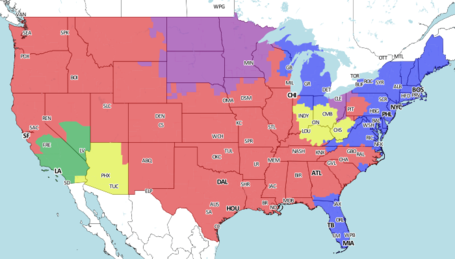 In case you haven't guessed, the yellow area - in other words, Arizona and the immediate environs of Cincinnati - will be the only ones getting to see this game. The geographical bulk of the country, the red area, will instead be watching Texas @ St. Louis, while the East coast gets (and I trust you're sitting down for this startling news) to see Boston, as they take on Detroit. Southern California and chunks of Nevada get the Dodgers/Padres match-up and the purple patch in the upper Midwest will enjoy Minnesota at Cleveland. So, really, this game is not one iota more "nationally televised" than yesterday's - it's just on a broadcast channel, rather than cable.

Same starting eight for the Diamondbacks as yesterday, with a small tweak in the bottom half of the order, with Jason Kubel moving up above Martin Prado. While Leake has been very solid this year - eight quality starts in 14 attempts - Arizona have got the better of him in their three previous meetings, tagging him for a 7.94 ERA, on 24 hits in 17 innings. However, he's 1-0 with a pair of no-decisions, and we probably want to forget our last encounter in July 2012, where the Diamondbacks had a 6-0 lead in the middle of the sixth inning, before Bryan Shaw was charged with four runs on one hit, and we lost 7-6. A .333 average for us, though everyone is in single-digit PAs.

Corbin has seen Cincinnati once, taking the loss in a 6-2 defeat at Chase in August last season. He actually looked very good early on, taking a shutout into the seventh, when Arizona were 2-0 up. But it crumbled quickly: 13 pitches later, he was leaving the game, the Reds having homered twice and taken a 3-2 lead. I'm hoping for better today, and I'd probably lean toward the under for runs scored. Speaking of lines, after the first game, the SnakeLine for this week is sitting on over, with the bullpen allowing two earned runs in 4.1 innings of work, a 4.15 ERA. Plenty of time for that to change though.

Elsewhere in the division, the Rockies have already won, avoiding the sweep in Washington, while the Giants and Marlins are playing a close one, with the score tied at the start of the sixth. As noted above, the Dodgers and Padres will be starting alongside our game, in San Diego. With the Padres now in second, and so our closest rivals, I may be forced to root for LA. But you can't make me like it, dammit, and I'll be fairly happy, regardless of the result, providing Corbin gets his 10th W as well.