Remember this game when we're being shutout by a soft-tossing journeyman. File it alongside the victories in Clayton Kershaw, Adam Wainwright, Yovani Gallardo and Yu Darvish games, as we beat the Reds in a Johnny Cueto start for the first time in seven tries.

Share All sharing options for: Diamondbacks 11, Reds 5: Oh, THAT'S where the offense went...

I love arbitrary and meaningless statistics. Have a couple of examples.

Do either of these mean anything significant? Probably not. But they're still kinda cool, especially on a game which looked perilously close to melt-down. At least, until our savior, St. Paul the Goldsmith, did come and usher us out of the valley of the shadow of death, with his 18th home-run of the season, a two-run shot into the sacred waters of the pool area. I believe it may have splashed some water onto the eyes of a blind man, who was then able to see again. Anyway, that was part of a four-run bottom of the fifth inning, which was a nice way to respond after crappy defense had helped the Reds rally for two runs, to tie things at three.

But I'm getting ahead of myself. The roller-coaster which was this one began with a wobbly first by Wade Miley, as he put two on with one out, before Brandon Phillips was kind enough to line into an unassisted double-play by Paul Goldschmidt. Things continued to improve immediately, with Parra swatting a 2-2 pitch from Johnny Cueto over the fence in right field, to give Arizona an immediate lead. That was a pretty good start, though considering we had scored a grand total of eight runs over the entirety of Cueto's previous six starts against the D-backs (and our recent offensive struggles), I had to confess suppressing fears this would be it for the night.

Comfort in this area came from an unusual source. The Diamondbacks had loaded the bases in the third, but there were two outs and Willie Bloomquist up, ripe for a "three LOB" scenario. But Willie B came through with a two-run single - and I should never had doubted him, as he's now 5-for-9 with runners in scoring position. However, the game then took a turn for the worse, as Miley struggled increasingly with his command. The fourth saw the Reds get on the board, with a solo home-run, and another runner was stranded at third. We breathed a sigh of relief, but it turned out trouble was only postponed, not canceled.

The top of the fifth started badly, with some confusion between Miley and Goldschmidt over who should cover first. The result was, no-one did and Cueto reached on an infield single. A one-out walk put two on for the heart of the Cincinnati order, and Joey Votto came through with an RBI double, and the game was tied when a Didi Gregorius error allowed Brandon Phillips to reach. A fielder's choice put runners on the corners with two outs, but that was it for Miley. His night ended with a line of five hits and four walks in 4.2 innings, with five strikeouts and all three runs earned. It took him 104 pitches to get that far, and it was a grim atmosphere in the GDT as he left.

Will Harris came on in relief, and ended the threat, leaving us tied - but that was all about to change. Bloomquist singled to lead off our half, and Goldschmidt cranked a Cueto pitch the other way, with one swing undoing all the damage done by the Reds to the score in their half. We were just getting started: singles by Jason Kubel and Miguel Montero meant Cueto was no more able to get through the fifth than Miley, and both man came round to score, on a sacrifice fly by Prado and a wild pitch. Cueto was charged with all seven runs in 4.1 innings - the same as he had allowed in his entire career against Arizona before tonight, covering 38 innings.

Zeke Spruill, newly promoted from Reno, made his major-league debut in the top of the sixth, and allowed a lead-off single, but no more damage, completing a scoreless inning. And the Diamondbacks went right back to it on offense, scoring four more times. That included Goldschmidt's 19th home-run, a monstrous bomb estimated at 457 feet. If confirmed, that would be the longest of his career, and the longest by a D-back at Chase in just over a year, since Miggy went 458 feet of Jarrod Parker on June 9 last year. His 19 HR is also the most by an Arizona hitter to this point in the season, since Luis Gonzalez in 2001.

A Kubel double, another Prado sac.fly and Gregorius double continued the pounding, to put Arizona up 11-3 at the end of the sixth, and that was effectively it as a meaningful contest. The B-bullpen did what was necessary: Tony Sipp allowed a home-run to America's Reserve First Baseman in the seventh, and the long-time absent Joe Paterson tidied things up with the first ever two-inning stint of his major-league career, allowing a run. But it was a night for offense: Kubel had four hits, Goldschmidt and Gregorius three apiece and Bloomquist two. About the only non-productive hitter was Cody Ross, whose new eyes clearly didn't help, as he went 0-for-4 with three K's. 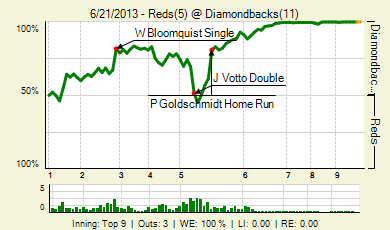 Clefo, Zavada's Moustache and soco took the top three spots in an active GDT that finished not far short of four digits. Also present: AzRattler, CaptainCanuck, Diamondhacks, Dutchfan, GuruB, Jim McLennan, JoeCB1991, JoelPre, Lozenge, Paper Clip, Stumpy657, The so-called Beautiful, TolkienBard, asteroid, azshadowwalker, blank_38, coldblueAZ, dbacks79, hotclaws, imstillhungry95, kishi, onedotfive, preston.salisbury, rd33 and snakecharmer. My crack about Bloomquist was most rec'd, but as promised, I'm going with one of the premature ejaculations of gloom from the top of the fifth inning, even if its creator claims this was his attempt at a reverse jinx...

there goes the game.

I saw it with my WIZARD eyes!

Why, yes: yes, it does go. This blowout victory was brought to you by America's first baseman. And it saw our lead in the National League West increase, as the Giants lost again to the Marlins. LOLGiants. The Rockies lost too, which means we are now 2.5 games ahead of - and you'll understand I had to check the standings to make sure this wasn't some kind of mistake - the San Diego Padres. Look, I know they swept us 'n' all, and are an NL best 8-2 over the past ten. But still... I'm unconvinced they're not a mirage, much though I enjoy them beating the Dodgers.

It's back to Chase on Saturday afternoon, for a nationally-televised games. Which probably means we'll suck and Goldschmidt will wear a golden sombrero. It should be a good one though, with our top young pitcher, Patrick Corbin, facing their top young pitcher, Mike Leake. First pitch is at 4:15pm, and it's on FOX.