Diamondbacks 8, Cubs 4: Triumph of the Wil

Let us pause to appreciate the pleasant surprise which has been backup catcher Wil Nieves this season.

Share All sharing options for: Diamondbacks 8, Cubs 4: Triumph of the Wil

Wil Nieves came into spring having to compete with veteran Rod Barajas for a spot, and he wasn't given a job until less than a week before Opening Day. And even there, he was backing up a guy in Miguel Montero, who had started more games behind the plate during the previous two seasons than anyone else in the major-leagues. But it's safe to say that Nieves has done everything expected, and came into this game worth 0.3 (fWAR) or 0.5 (bWAR) more than Montero, despite a lot less playing-time. Now, obviously, a great chunk of that is Miggy's offensive struggles: but two months in, and after three hits today, our backup catcher has a .385/.419/.436 line. That'll do, Wil; that'll do.

Put another way, he has 15 hits in 39 at-bats; Montero had 16 hits in the entire month of May, with more than twice as many at-bats (81). Considering its Nieves' defense which largely got him the job over Barajas coming out of spring, the fact he has any hits at all is a bonus. But it's also worth considering that Nieves hit over .300 last year, following his acquisition by the Diamondbacks, so he's now hitting .347 over his entire time with Arizona. Admittedly, we're still talking less than 100 plate-appearances, yet it's good to see. And what's Barajas doing? Not apparently playing professional baseball. Solid choice, Mr. Towers. And on to today's game.

Neither pitcher showed good control in the first: neither allowed a hit, but they combined for four walks, two hit batters and a wild pitch in an opening frame which took forever to complete. Edwin Jackson walked Gerardo Parra, who advanced on a wild pitch, and with two outs also walked Paul Goldschmidt, who stole second. But Jason Kubel struck out, stranding two in scoring position. Patrick Corbin was worse still, walking two and hitting two, giving the Cubs a run with a groundout to first the only ball in play. At one point, he threw eight straight out of the zone, and was helped by Alfonso Soriano's free-swinging approach. It was rather un-Corbinesque, shall we say.

However, Arizona took advantage of some sloppy Cubs defense in the second, scoring three runs. With one out, Wil Nieves and Cliff Pennington singled. Corbin was up, and "butcher boy'd" it, faking the bunt before swinging away: it was an easy pop-up to shallow center, but the ball clanked off the outfielder's glove, and everyone was safe, loading the bases. Parra made the Cubs pay, driving a ball through the right side of the infield to score two runs, and another came home when Jackson uncorked a wild pitch that their catcher couldn't handle. Middle of the second inning, and we were already about 55 minutes in.

Corbin bounced back with a much better second inning: no walks, and only a bunt single, that reached second on an error by Pennington. Most importantly, it was a zero, and got the offense back out there again quickly. They had men on second and third with one out, after a Cody Ross bloop double, but Jason Kubel decided to break from third on a contact play. I probably need say no more than that, and drawing a veil over the result is likely the best, for all concerned. Suffice it to say, that both starting pitchers had settled down significantly after their wild and extended outings they had in the first.

The Cubs pulled back within one in the bottom of the fourth, after a two-out double was followed by an RBI single off the bat of Edwin Jackson. However, the Diamondbacks came right back and restored the lead with a broken-bat blooper over the head of the home shortstop, from Wil Nieves. That came immediately after a much more explosive broken bat from Cody Ross - a large shard of it helicoptered down the third-base line and forced Matt Williams to head for the turn. Fortunately, there was no damage done, but I would blame Williams if he'd had to change his pants between innings, as it must have been a scary moment.

The troublesome third out had been problematic for Corbin all afternoon, and so it proved again, in the bottom of the fifth. A two-out double off the bat of Soriano,. was followed by a game-tying two-run home-run off the bat of "Free" Scott Hairston. All five hits and four Cubs runs this afternoon had come with two outs. So, it was effectively a reset game, as we headed into the sixth inning. However, things went quite well after the Cubs tied the game at four last night: particularly after seeing the Cubs bullpen last night, I was feeling optimistic about Arizona's chances against them this afternoon.

Turns out I didn't even have to wait that long. Perhaps understandably, the Cubs manager was "somewhat reluctant" to go to his relievers today, and Jackson retired the first two in the sixth without trouble. But that simply set up some two-out magic for the Diamondbacks, who got consecutive hits from Didi Gregorius, Martin Prado and Paul Goldschmidt to retake the lead. After Jackson's fourth wild pitch of the day, Jason Kubel was intentionally walked, and Ross made the Cubs pay for their impertinence with a two-run single, to bring home the tacos for local fans, and make the score 7-4 in the middle of the sixth.

Corbin got through his half of the frame, and that was the end of his day, and also his streak of quality starts, because he was charged with four runs on six hits and two walks with five strikeouts. It wasn't his greatest outing of the season, and it required 104 pitches for Corbin to get there, but considering what happened in the first inning, it could certainly have gone a great deal worse. Ziegler pitched the seventh, notching his fourth double-play; David Hernandez struck out the side in a perfect eighth, and the Heath Bell Experience, not open to visitors since last Monday, worked a very low-drama ninth, when we might not have minded a little tension, just to get it out of the way.

I was surprised - in a good way - to see Carlos Marmol come out, having been the victim of the GoldSlam which broke the Cubs' will last night. He walked the first two batters faced, but after striking out Kubel, was helped by Prado taking off and being caught stealing third. Another walk followed, and Nieves dropped in his third hit of the afternoon, scoring what should have been a two-run shot, but was just an RBI single. That ended the productive offense, with Arizona getting 13 hits, but a dozen were singles. Nieves got three hits, while there were two apiece for Goldschmidt, Kubel and Ross.

It was the first time since Opening Day we've reached tacos without hitting a home-run, and the first time we've scored eight runs on one extra-base hit in almost ten years, since June 27, 2003. 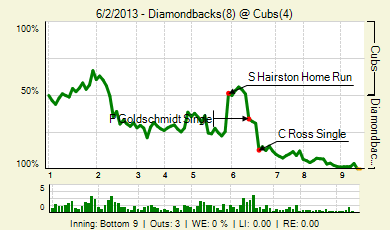 Only as pinch hitters.

most of the work was already done.

Sometimes, being British has its advantages. :) A satisfactory end to the series, considering Clefo was expressing concern about getting swept in the early innings yesterday. The Rockies and Giants also won, so the status at the top of the NL West remains unchanged, Arizona holding a 2.5 game lead over both. After the light thrill which is taking a series from the Cubs, we move into likely more challenging territory, for a four-game series against the Cardinals in St. Louis. I think I'll be happy if we can take two of those four.