Here's the piece which John Smoltz did last night on MLB Network’s <strong>MLB Tonight</strong>, discussing Patrick Corbin. Smoltz explains how Corbin’s throwing motion and momentum he has towards home plate reminds him of former teammate Steve Avery (you can see that in picture below), in particular the way that their mechanics allow for the baseball to get out there and "disappear" to the hitter. However, with that said, Smoltz does warn how Corbin has to be careful not to rotate too much, because the baseball will start drifting away from its intended location. 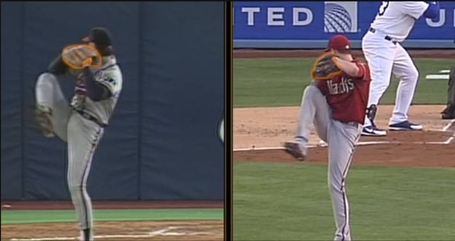 Avery is somewhat forgotten, being the fourth starter behind the Holy Pitching Trinity of Smoltz, Glavine and Maddux. But he played for the Braves from 1990 through 1996. putting up a 3.83 ERA over 203 games (201 starts) in Atlanta, and making the All-Star game in 1993, when he went 18-6 with a 2.94 ERA. However, let's hope one aspect of his career is avoided by Corbin. Avery suffered an injury the September after his All-Star appearance, which has been blamed by some on an excessive workload for a young pitcher. He was never quite the same thereafter, with a 4.86 ERA from 1994 on, and didn't make a start after his 30th birthday. Hopefully Corbin will last longer.