It's a truism in baseball that there's always one guy on the other team about whom you say, "Don't let this guy beat you." Well, "that guy" beat the Diamondbacks tonight. Twice.

Share All sharing options for: Goldschmidt 2, Stanton 3: At least one Marlin soars

Let's just review the Marlins this season. Coming in to tonight, their team line was .232/.289/.330, a .619 OPS which is close to 50 points worse the Cliff Pennington's career numbers. Not to pick on Pennington of course, but he's a player whose value is almost entirely with his glove. And the Marlins have been significantly worse than that this year. No team in the league has had an OPS that low for over 40 years, since the 1972 Padres. They're bad. But they have Giancarlo Stanton., who had a career OPS+ of 140 before tonight's game. He is the epitome of the guy you don't let beat you. He's Barry Bonds on the 2001 Giants.

Tonight, for example, he was being "protected" in the line-up by the Marlins' clean-up hitter, Marcell Ozuna. Ozuna is a rookie who possesses exactly one career home-run in the majors, over his 162 at-bats there. Stanton is, literally, the only hitter in the Marlins line-up who poses a threat. This isn't second-guessing. You can ask Mrs. SnakePit, because before Stanton's second at-bat, I turned and said to her, "This guy scares me." The result was a loud, very long fly-ball to the warning track and a large lump in my throat. But the D-backs didn't learn. With the game on the line subsequently, they pitched to Stanton twice, and got burned both times, costing them this one.

You can kinda understand the first situation. Patrick Corbin had pitched brilliantly through the first five innings, not just keeping the Marlins off the board, but no-hitting them. The only base-runners he had allowed were Stanton, who reached on an error by Martin Prado in the first, and a two-out walk in the fourth. The no-hitter was finally broken up by Juan Pierre, with one out in the sixth, who slapped a bloop hit over the head of third-base and dumped it into left-field. One out later, Stanton was up, and Corbin fell behind 2-0. He did appear to hit his spot with the next pitch, based on where Montero was setting up, but Stanton still crushed it, over the D-backs bullpen in left. Tied game.

There's another proverb that seems relevant here. Fool me once, shame on you; fool me twice, shame on me. After a scoreless seventh and eighth innings, Corbin exited, having allowed two hits and one walk, striking out seven and throwing 106 pitches. The team turned to Heath Bell for the ninth, which is fairly standard practice: at home, you use your closer in the ninth of a tied game, and play for the win in the bottom of the inning. With one out, Stanton was up again. Bell got ahead of him with some nasty curves, but with a 1-2 count, left a fastball up - as 'hacks noted. apparently shaking off Montero - and Stanton, inevitably, crushed it the other way, over the fences in left-field.

Daniel Hudson made a spirited attempt to defend the decision on Twitter, saying "Sorry guys, two outs in the ninth, you NEVER put the go ahead run on base. Next guy hits a homer, you’re down 2. Then what?" Of course, as noted above, the odds of Ozuna hitting a home-run were so slim as to require some kind of advanced optical device to locate them. Frankly, knowing Stanton was certain to come up in the ninth, I'd have used Ziegler, off whom it's almost impossible for anyone to hit a home-run. If he walked or got one through the infield, you play no doubles defense, and it takes two hits to score him. The bottom of the Marlins order probably aren't going to do that.

Remarkably, the Marlins didn't just win despite not getting a hit with runners in scoring position, they didn't even have ONE PLATE-APPEARANCE with runners in scoring position. It's only the fourth time in franchise history we've lost such a game. It was also only the sixth time the Diamondbacks pitching staff have allowed three hits or fewer over nine innings of work, and still lost - the last occasion was in September 2008, when Jon Rauch allowed a go-ahead home-run to Corey Patterson in the 10th inning against Cincinnati, and we lost 2-1 to the Reds, who had one at-bat with RISP all night, and no hits.

But, at least as big a problem this evening was the Diamondbacks being almost entirely futile with their scoring chances, going 1-for-12. The sole hit was a Goldschmidt single back up the middle, which scored Gerardo Parra, who had singled to left, leading off the fourth and then OMGHESSTEALING SECONDMAKEITSTOPTOOTBLA... What? He's safe? Er, please carry on. It was Goldschmidt's second hit of the night: he had homered to give Arizona the lead in the third, doing a very nice job of driving the ball the other way, for a line-shot. Doing that more often, while they continue to pitch him down and away, will be very important to his continued success.

But otherwise? A series of wasted opportunities. In the fourth, Jason Kubel walked to lead things off, advanced on a wild pitch, and took third on a groundout by Prado. But with one out, Didi Gregorius fouled out, and Corbin struck out. Then, in the bottom of the eighth, and the game tied, Miguel Montero singled and Cody Ross walked, to put two on with no outs. However, Kubel had a shallow fly, Prado went down swinging at a pitch around his eyes, and Gregorius grounded out. We were also the victim of some excellent Marlins defense, notably with two outs in the second, when Parra was robbed of a hit back up the middle which would likely have scored Prado from second.

So, this one stung, proving how baseball is a game of inches, and exactly how frustrating that can be, because this definitely feels like a game we could - and, indeed, should have won. The worrying thing is, we now have to turn to Delgado tomorrow, to stave off becoming the first team to lose a three-game series at home to the Marlins all season. We are still in first - coincidentally, courtesy of the Rockies also losing a three-hitter of their own in Toronto. But if the Giants can beat the Padres (they're currently tied in the 11th), they will leapfrog Colorado to sit one-half game back of us. 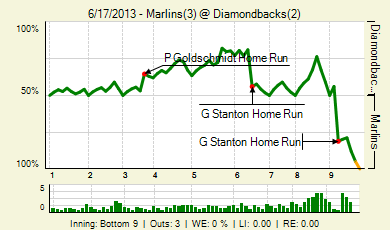 DbacksSkins led all commenters, with Clefo in second, and a tie for third between Zavada's Moustache and SongBird. Also to be seen: Airwave, AzRattler, Diamondhacks, EzioExManAZ, GuruB, Jim McLennan, JoeCB1991, Majabe, Marc Fournier, PR151, Paper Clip, Rockkstarr12, The so-called Beautiful, TolkienBard, Turambar, asteroid, azshadowwalker, blank_38, coldblueAZ, hotclaws, imstillhungry95, luckycc, onedotfive, porty99, rd33, snakecharmer and soco. If we had won, Comment of the Night would have been ZM's, "C'mon, Heath Bell. Make like it's 2012 and screw over the Marlins." But I'll go with John B's comment in the quick recap:

I don't mind rooting for a bad team

but I hate rooting for a dumb team. The only way to lose that game is to throw fastballs to Stanton. It’s the only way. Between Montero, Corbin, Bell, Gibson and Nagy, there has to be someone among that group that has to realize the only way to lose the game is to throw fastballs to Stanton. I’ve never been witness to a dumber loss in my entire life. I was at the game and all I was saying to anyone who would listen is, don’t throw Stanton a fastball. If he hits a curve or a slider or a changeup out, okay, I’ll live with it. Or if you walk him and somebody else beats you, okay, I’ll live with it. But how you can be so stupid as to throw Stanton fastballs. Unfuckingbelievable. Dumb as dumb can get. Hard to root for a team that plays that dumb. I’ve never been so pissed at this team as I am right now. Hard to watch dumb baseball.

I think the F-bomb is entirely forgivable, in the circumstances. It's back to Chase tomorrow, as noted above, and what probably counts as the closest thing to a "must win" game we've had this season to date. Because losing five in a row against the Padres + Marlins is not what contending teams should do.