They moved the fences in at Petco this year, but you wouldn't notice by the D-backs performance. For the first time in 10 series, we didn't score more than four runs in any game, and the Padres swept us as a result - they're now only two games back.

Share All sharing options for: Diamondbacks 1, Padres 4: Swept away in San Diego

Good stuff to come out of this game? Well, Ian Kennedy had his best start of the season since Opening Day, holding San Diego to one run over six innings, on only four hits. He walked one and struck out six: coming after an almost as good start in Los Angeles, there's perhaps hope that the worst might be over for Kennedy. He was pretty sharp this afternoon, throwing lots of strikes (72 of 104 pitches) and seemed to be getting a good number of swinging strikes from the Padres - 20 of those. His only mistake was a home-run to lead off the bottom of the third, and it was actually not a bad pitch.

That was the only Padres base-runner to advance safely beyond first base against Kennedy through the first six innings - there was an attempt to steal second in the first inning, but Miguel Montero gunned down the runner. That was only Miggy's fourth CS of the year, in 22 attempts. However, Nick Piecoro looked at Montero's throws yesterday., analyzing whether the bases were stolen on him or the pitcher, and concluded: "There doesn’t appear to be any major issues with his throws – don’t be surprised if his numbers improve over the course of the season." On the basis of this, I'll be asking Piecoro for some lottery numbers later.

Kennedy did get into trouble in the seventh inning, after a rare Cliff Pennington bobble allowed the lead-off man to reach, and the next batter lined the ball into right-field. That was the end of Ian's afternoon, and he turned the ball over to our inherited runner specialist, Brad Ziegler, with two on and no-one out. Ziegler made a pretty play to snag a bunt attempt which was popped up between the mound and home, struck out the next batter, and ended the inning with a ground-ball to Martin Prado. Ziegler's gonna Ziegle: he has inherited 32 runners this year, more than twice as many as the next-most D-back [Tony Sipp's 17]. Only 4 have scored: 12.5%, compared to league average of 29%.

Unfortunately, David Hernandez wasn't able to put up a zero in the eight. He allowed a one-out single, and then a two-out walk, though appears to have been Dale Scott'd out of strike three on that at-bat. While Hernandez did miss his soit - Montero was set up on the other side of the plate - FoxTrax showed the pitch clearly caught the strikezone, but home-plate umpire Scott appears to have been fooled by Montero having to move, and called it a ball. The eventual walk extended the inning and allowed Kyle Blanks to hammer a pitch deep into the bleachers near the Western Metal Supply Building, for a three-run homer, which was the margin of defeat this afternoon.

But, it's hard to be upset with Hernandez on a day when the only run is driven in by your starting pitcher. The sum total of the Diamondbacks' production this offense was a one-out single by Kennedy in the third innings, after Cliff Pennington had doubled and stolen third. However, it all went downhill from there, beginning almost immediately with Gerardo Parra being caught stealing second to end the frame - Parra is now 5-for-13 on stolen-base attempts this season. That 38.5% rate is now the worst in franchise history, for any player with ten or more tries in a season: He and the Brewers' Norichika Aoki (6-for-13) are the only such players below 50% success in the majors this year.

Our best chance to break the tie was in the sixth, when Kennedy got his second hit of the day to lead things off. One out later, after a Parra sacrifice, Willie Bloomquist also got his second hit, to put runners on the corners with one out. However, Paul Goldschmidt couldn't come through, instead hitting into his team-leading 11th double-play of the season. Poor Goldzilla had a terrible series, going 0-for-10, and since his home-run against the Giants back at Chase, has just three hits in 33 at-bats. Parra also hit into a double-play in the next frame, restoring Arizona's average to exactly one per game, the most in the league. Miami are next, on 67, so the next series should be fun...

The Padres scoring three in the eighth didn't exactly give the Diamondbacks much chance to come back. Montero did extend things slightly, with a two-out double in the ninth, but Cody Ross was robbed of a hit in center, and the Diamondbacks were swept on the road for the first time this season. The result leaves a very interesting situation in the NL West: only two games now separate ourselves in first, and the Padres in fourth: the Rockies are one-half game back, and the Giants can join them there, if they beat the Braves in the ESPN Sunday night game later on. 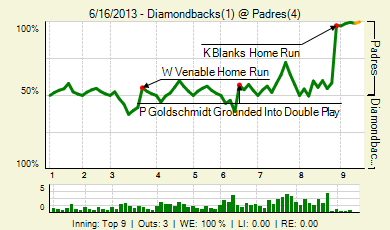 A fairly lightly-trafficked Gameday Thread - I suspect a lot of people were perhaps spending time with their Dads this afternoon. Clefo suffered no ill-effects from the Tucson invasion yesterday to lead the way, ahead of JoeCB1991 and preston.salisbury. Also popping in were: AzDbackfanInDc, AzRattler, GuruB, Jim McLennan, Majabe, Marc Fournier, Paper Clip, Scott Howard, SongBird, Zavada's Moustache, asteroid, azshadowwalker, coldblueAZ, cole8865, hotclaws and onedotfive. Sad, but undeniably accurate, comment of the day goes to Preston:

Too bad Kennedy probably won't get another inning

we need his bat in this lineup.

It's back home to Phoenix for the D-backs, and they'll be glad to see it after the past few games. The soft underbelly of the National League, in the shape of the Miami Marlins, comes to Chase for the next three games, and we definitely need to take advantage. First pitch tomorrow is 6:40pm, with Patrick Corbin going again for his 10th win, up against Jacob Turner.

Don't forget to join us later for the weekly SnakePit Round Table, with your host, Clefo!