Mrs. SnakePit and I made the trip down I-10 yesterday, to see the D-backs Triple-A affiliate Reno Aces, playing their equivalent in the Padres system at Kino Stadium in Tucson.

The trip down was entirely uneventful. We've done it often enough that we track progress by the various landmarks: the three Cracker Barrels, Rooster Cogburn's Ostrich Farm and the always-amusing Pikachu Picacho Peak. We checked into our hotel, the newly-opened ALoft on Speedway, and then headed over to the designated meeting point, two blocks down, the 1702. However, it was closed: a sign on the door told us they were off to something called Brew at the Zoo and for Father's Day. Shockingly, they had not seen fit to contact us personally in regard to the matter, and inform us of their unavailability.

Wandering off we wondered what to do, but fortunately bumped into azshadowwalker, who had just arrived. We were going to head back to the hotel, but on the way saw a bar, enchantingly named Dirtbags. On her assurance that it was not as dubious as it sounded (appears to be a local institution), we went in, and it was fine - if almost entirely deserted, though that's not too surprising, given it's a Wildcat bar and the University of Arizona was entirely out of session. Having sent an emergency Tweet to Clefo, he located us shortly afterward, and we settled down to discuss... Well, everything from the new Star Trek movie to the D-backs' suspensions, via liberal arts astronomy.

DbacksSkins and jinnah showed up just as we were leaving, so we agreed to reconvene at Kino Veterans Memorial Stadium - the venue previously known as Tucson Electric Park. After a slight detour ("Is that the park? Oh, never mind, it is, in fact, completely deserted..."), we arrived and reconvened at the box-office. Heavily touted was the upcoming appearance of the Zooperstars, a ccollection of animal characters which seemed more like an excuse for a selection of really bad puns, given names like Ken Giraffey Jr, Clammy Sosa and Alex Frogriguez. They'll be in Tucson on Friday night. Seriously, we should go... 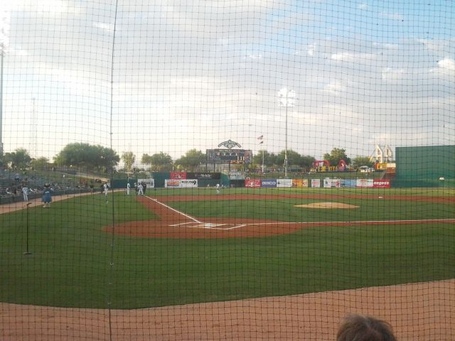 Tickets for the game were very reasonably-priced. The original plan was to go for General Admission at $7, but what the hell - you only live once - so we decided to go for the top of the range "Premier" seats, at an extortionate fifteen bucks. That got us seats right behind home-plate, six rows back, from where we could see the Aces warming up. That included Aaron Hill, making his first rehab start as he comes back from a broken hand. He looked a bit rusty early on, striking out in his first two at-bats, then fouling out to the infield on the first pitch of his third, but he came through with two outs in the seventh, singling home Chris Owings. Hill also looked game-ready with his glove.

The main thing I took away was an impressive performance of eight shutout innings from Aces' starter Zeke Spruill. While he couldn't quite post consecutive complete-game shutouts - Evan Marshall worked a scoreless ninth - he held the Padres to four hits and two walks over eight, and they had only one-at bat against Spruill with a runner in scoring position, and that was by the opposing pitcher. It doesn't look like he'll be the one to get the call when we need a pitcher on Tuesday: that looks increasingly likely to be Randall Delgado, for whom Tuesday would be his scheduled day, but Spruill has certainly moved up the depth chart. 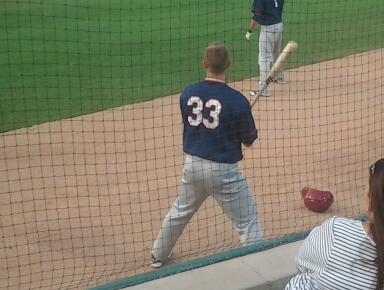 First-baseman Mike Jacobs had three hits, including a home-run, and ended a triple short of the cycle. He has only played 11 games for Reno - he started the season in the Mexican League - but has certainly hit the ground running, with a line of .419/.468/.767. As a left-hander, he might be a better back-up to Paul Goldschmidt than Eric Hinske, but then we said that about Kila Ka`aihue, and he's now playing for the Hiroshima Toyo Carp. I also suspect that there's little or no chance of Hinske getting released by the Diamondbacks in the present circumstances, despite his .563 OPS. Though it would give an amusing twist to #FreeHinske.

Probably the most entertaining and memorable moment came in the seventh when, with one out, Tony Campana laid down a bunt. Now, I'm not quite sure what happened - we were returning from the concession stand at the time - but he and the ball arrived simultaneously at the first baseman, and everyone crashed to the floor in a heap. Fortunately, no-one was seriously hurt, but when he finally stood up, Campana was astonished to discover he had been called out and, there's no other word for it, completely lost his shit. I don't think I've ever seen a player closer to punching an umpire. I just wish there was video of it somewhere, but we were all too stunned to take any. 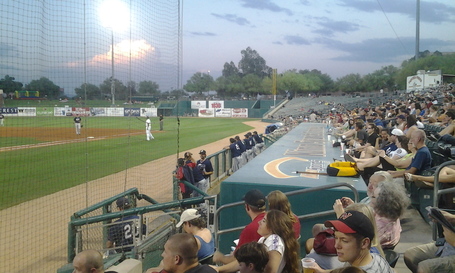 The fact that the Aces won was a bonus, but it would have been a thoroughly entertaining experience regardless of the result. It's a nice park, and the concessions were remarkably reasonably-priced: a Stella Artois was $5.50, half the price of something similar at Chase Field. And there was also a fireworks display afterward. We were slightly scathing when we heard it being described as "the best in Tucson tonight" [after all, precisely how many other firework displays were taking place in Tucson on June 15?], but the truth is, it was actually pretty good. Probably the equal of the ones at Chase, and you didn't have to hang around for as long after last pitch.

Of course, this being minor-league baseball, the pauses between innings were occupied with the sort of minor-league amusements you only find at minor-league baseball. The mascot is a clone of the Padres' Swinging Friar, known as the Kino Bambino, and the competitions varied between the standard i.e. spin ten times around with your head on a baseball bat, and run 20 years, to the genuinely surreal. The latter was represented by getting four kids out behind home-plate and telling them to imitate a raven. Sadly, none of them quothed, "Never more." We speculated the entire concept should be traded, for a promotion to be named later.

I also have to mention Cody Decker, the first baseman for the Tucson Padres, who may just be our new favorite minor-league player, simply because his walk-up music was... The theme to Doctor Who? That's brilliant and amazingly nerdy. Needless to say, it provided an entirely new aspect to our heckling. Also part of the Padres line-up was a name from the Diamondbacks past: Brandon Allen. That triggered a discussion of great first-baseman flops in franchise history, which may be the first time anyone has mentioned Juan Miranda and Josh Whitesell in any meaningful way this year. 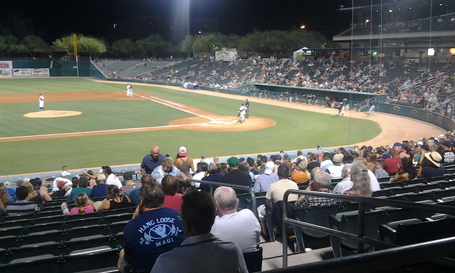 All too soon it was over, and it's a shame that it appears the franchise will be relocated to El Paso for next season, leaving the Diamondbacks again, the only pro team in the state [I think the Golden Baseball League has gone under] The Aces will be making their final trip to Tucson in August, and it's not inconceivable that we'll make another trip down to see them then: it was a grand weekend, and one we'd love to repeat. Thanks to (in order of appearance!) Kim, Charlie, Phil, Jinna and Tres for hanging out with us, and helping to make it such an enjoyable experience.