Diamondbacks 4, Padres 6: Give them an inch and they'll take a Miley

Welcome to Dbacks 2013 #68 Will Jason Marquis' deal with the devil continue to holdup or will America's 1B terminate the deal? Find out after the jump

Share All sharing options for: Diamondbacks 4, Padres 6: Give them an inch and they'll take a Miley

The game begins somewhat unsatisfactory as Parra and Gregorious make two quick outs, but a walk from Goldschmidt and a home-run from Montero make it 2-0 in favor of the Dbacks. The game quiets down until the top of the 4th when Miguel Montero walks to lead off the inning. Cody Ross hits into a fielder's choice, and Montero is out at second and Ross is safe at first. Kubel hits a single and Prado walks. Pennington grounds into a force out, but Ross scores from 3rd to make it 3-0 in favor of the Dbacks. Miley grounds out in the next at bat to end the half inning. The bottom of the 4th starts with an Everth Cabrera single. Chris Denorfia reaches bases on an error by Didi Gregorious. Chase Headley singles to center and Cabrera scores. Blanks hits into a force out, and Headley is out at second, Logan Forsythe hits a sac fly and Denorfia scores. Jesus Guzman hits a single and moves Blanks over to 3rd. Yasmani Grandal comes to bat and swats a home-run to left field to make the score 5-3 in favor of the Padres. Pedro Ciriaco grounds out to finally end the disastrous inning. The game quiets down again until the bottom of the 7th when Kyle Blanks hits a lead off home-run to make the score 6-3 in favor of the Padres. The next 3 batters go down in order to end the inning. The action picks up again in the top of the 9th when Martin Prado pops out to first base, and Cliff Pennington hits a single. Bloomquist lines out to center and Gerardo Parra comes up to bat and swats a double to right field to score Pennington to make the score 6-4 in favor of the Padres. The comeback falls flat as Didi Gregorious makes the final out of the game with a fly out to center field. 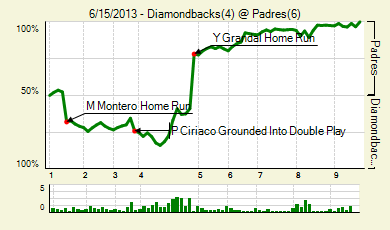