Post-Mortem of a Brawl

Now that tempers have (somewhat!) cooled, let's take a look back at last night's events and see what reactions are, both from those involved and elsewhere.

Share All sharing options for: Post-Mortem of a Brawl

"You wanna know how to get Capone? They pull a knife, you pull a gun. He sends one of yours to the hospital, you send one of his to the morgue. That's the Chicago way!"
-- Sean Connery in The Untouchables.

"All the DL guys were out there, too. I guess their arms were feeling pretty good because they were throwing good punches."Miguel Montero

Ah, baseball's unwritten rules. Gotta love 'em. They're traditional, illogical, nebulous, apparently arbitrary and quite unlike any other sport. What's particularly ironic is that this all appeared to start with a hit batter who wasn't - Cody Ross in the fifth inning succeeded in convincing home-plate umpire Clint Fagan, that he had been plunked, when replays appear to indicate that wasn't the case [Fagan was the official who blew a potentially-crucial call at first base in Monday night's game, and also gave Yasiel Puig four strikes last night, so is certainly having a series to forget]. From little acorns do all-out brawls ensue.

Before we get to the reactions to last night's game, a couple of general observations. Interesting to note that, after the warning, Greinke's plunking, the brawl and subsequent ejections, Joe Paterson then hit Mark Ellis with his very first pitch of the 2013 season. And absolutely nothing happened. And today, Rob Neyer calls for Kennedy - and only Ian Kennedy - to get a lengthy suspension. "If Kennedy doesn't miss two starts, I mean really hit the first-place Diamondbacks where it hurts, then something's wrong with the system. Because he basically beaned the Dodgers' two most exciting players in the head, at least one of them purely out of spite."

Sorry, I call BS. It was Zack Greinke who started this HBP war, with an obviously deliberate plunking of Montero. He has hit three batters this season: two have led to bench-clearing brawls. Now, I'm obviously not saying that Kennedy should get off scot-free [interestingly, the origin of that phrase has nothing to do with my land of origin. Never say the SnakePit isn't educational], but basically what Neyer is saying is that Kennedy should get a lengthy suspension for poor control. IPK led the league in hit batters last year: if you're going to allow pitchers to hit batters, as Greinke did, you can't expect his opposing number suddenly to develop pinpoint accuracy, when they reply in kind.

Whatever suspension one starting pitcher gets for their in-game actions, should be matched by the other. They're both equally culpable and should receive equal punishment for that. However, for their actions during the brawl, I would expect to see MLB come down hard on the Dodgers, because it seemed like just about everyone demonstrating violent aggression was wearing Dodger Blue, from manager Don Mattingly hurling our bench coach Alan Trammell to the ground, down to reliever J.P. Howell spearing assistant hitting coach Turner Ward into the dugout railing, and Greinke throwing wild haymakers at Miguel Montero.

I trust they'll be punished appropriately, but with a man in charge of discipline, Joe Torre, who managed the Dodgers for three seasons immediately before Don Mattingly, I wonder exactly how much impartiality we can expect. We've already seen how non-neutral the reporting has been, with ESPN barely mentioning Greinke's actions, and pillorying Kennedy for hitting the poor, defenseless Dodgers. My hopes of genuine justice aren't exactly sky-high right now. 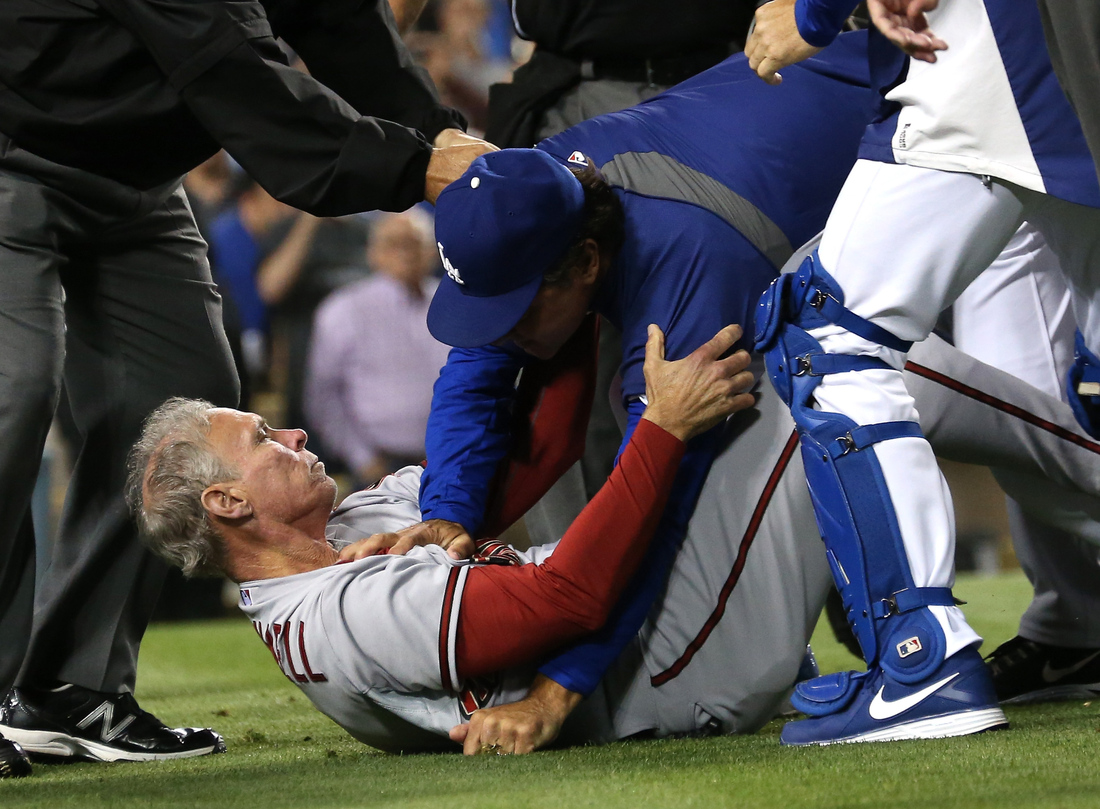 "I know they're mad. They thought we hit Puig, but certainly we didn't. The guy hits everything out over the plate. But the ball got away from Ian and got inside. It's as simple as that. I didn't order anything. It's certainly not what Ian wanted to do."
-- Kirk Gibson

"I thought I got him on the shoulder, but by his reaction, I figure I got him somewhere in the face. I definitely did not want to hit a guy with two strikes and put somebody like him on base."
-- Ian Kennedy

"Puig gets hit in the face, Montero gets hit, it should have been really over at this point."
-- Dodgers manager, Don Mattingly

"I wanted to throw inside just kind of to send a message, but not to hit the guy and it just kind of got away from me a little bit. I was really just trying to go inside because I didn't think it was right what he did to Miggy."
-- Kennedy

"It got pretty ugly. They came out of nowhere, just throwing punches. When everybody was trying to break it up, they just kept coming and throwing punches. It was like 25 against 72, because all the DL guys were out there, too. I guess their arms were feeling pretty good because they were throwing good punches."
-- Miguel Montero

"There were four of us and what, 60 of them? When it gets over by the dugout in the fan's area, it gets kind of dangerous. You have the railing there. You can't go anywhere when you get pushed up against the railing... [It] doesn't mean that other people won't get fined. The league will look at video."
-- umpire crew chief Brian Gorman

"I was out of my mind just trying to protect my teammates. If you want to hit somebody, don't hit a pitcher. Don't hit guys in the head. That's crazy."
-- Dodgers' reliever, Ronald Belisario

"We're certainly not going to try and jeopardize anybody's career. We respect those guys too much. They responded and it was certainly obvious. And beyond that, things just got out of control."
-- Gibson

"If it's over, it's over, great,. If it's not, baseball has a way of working things out."
-- Willie Bloomquist

Sucks being the team that hit someone unintentionally first. Greinke obviously hit miggy on purpose, but gets nothing but a warning

It certainly turns tonight's Dodgers-Diamondbacks game into the closest thing to must-see TV for fans, since the 2011 post-season. While it's possible nothing will happen - and I suspect the umpires may well issue a warning tonight to both teams, before a pitch is even thrown - the possibility that this could turn into Round Two isn't something that any fan of either team will want to miss.