Welcome to 2013 Dbacks #65. Will Goldymania run wild on L.A. Will Greinke finally stop looking like Skeletor from He-man? Find out after the jump.

Share All sharing options for: Diamondbacks 3, Dodgers 5: It's Clobbering Time

The 1st inning is pretty uneventful except for a Gerardo Parra single in the top of the 1st. The 2nd, 3rd and 4th were just as uneventful. In the top of the 5th Cody Ross is HBP and Kubel homers to make it 2-0 in favor of the Dbacks. The action dies off until the bottom of the 6th when Yasiel Puig gets hit in the face with a pitch. Fortunately he's alright and gets up and takes his base. Andre Ethier comes to bat and smacks a 2 run home run to tie the game with a score of 2-2. At the top of the 7th Miguel Montero is hit by Skeletor and the benches clear and a brawl threatens to break out but nothing ultimately happens. Noting else happens until the bottom of the 7th when Greinke is hit in the shoulder by Ian Kennedy and brawl finally breaks out. Kennedy, Gibson and Turner Ward were ejected from the Dbacks side. Mark McGwire and Yasiel Puig stayed in the game. Skip Schumacher and Nick Punto make two quick outs to end the inning. A.J. Pollock starts the 8th inning offense with a double to center field. Parra walks and Willie Bloomquist singles to score A.J. Pollock making the score 3-2 in favor of the Dbacks. Goldschmidt and Montero make two quick outs to end the half inning. Hernandez comes in to pitch and walks Adrian Gonzalez. Alex Castellanos grounds out to Montero. Hernandez walks the next two batters to load the base. Tim Fedrowicz doubles to left and Gonzalez and Ethier score to make it 5-3 in favor of the Dodgers. Joe Patterson replaces Hernandez and gets a fly out from Luis Cruz. He hits the next batter Mark Ellis but nothing ensued and Mark Ellis just put his head down and took his base. Skip Schumacher strikes out in the next at bat. The Dbacks go down 1-2-3 in the top of the 9th. The Dbacks lose to the Dodgers with a final score of 5-3. 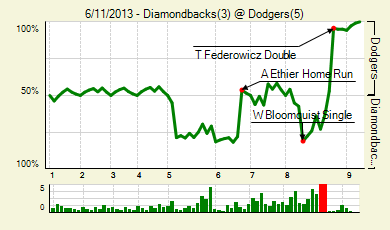