Diamondbacks 5, Dodgers 4: We are fans of The Very Human League

The Diamondbacks had beaten the Dodgers in the five previous times they had faced Clayton Kershaw, with Kershaw taking the loss in four. Could they run the streak to six? Sure. But it'd take a seriously late rally to do so.

Share All sharing options for: Diamondbacks 5, Dodgers 4: We are fans of The Very Human League

After a 1-2-3 first for the Diamondbacks, the Dodgers jumped out in front immediately. After getting a lead-off strikeout, Wade Miley walked the next batter on four straight balls, and he came around to score on a pair of two-out singles. Things could have been worse, but with two on, Andre Ethier lined the ball into the outfield, fortunately straight at Gerardo Parra. Arizona came right back, tying the game in the second without recording an out. Cody Ross doubled down into the left-field corner, and Miguel Montero brought him home with a single back up the middle, to make the score 1-1 after two.

The visiting Diamondbacks threatened again in the third inning, getting two on base, courtesy of singles by Willie Bloomquist and Ross's second hit of the night, but Miguel Montero started at a big, looping curveball for strike three. Miley seemed to be settling down, and a nicely turned double-play, started and ended by Paul Goldschmidt, ended the third and kept the scores level. However, the fourth inning, so troublesome for many D-backs starters this year, proved long and difficult for Miley to negotiate, and allowed the Dodgers to take the lead - though it could have been worse than the single run allowed by Miley.

What saved us from a crooked number was an ill-advised attempt by a certain inexperienced Dodger [who needs no more publicity] to go first to third on a single through the infield to Gerardo Parra. We've seen this before, and you know how the story ends: the Parrazooka fired to Martin Prado at third. said certain inexperienced Dodger learned that you don't run on Parra. However, LA got some good luck, taking advantage of a Bloomquist "error" [later changed to a "hit"], on a potential inning-ending double-play. That eventually led instead to a broken-bat bloop dying just in front of a diving A.J. Pollock, to drive in the go-ahead run and put runners on second and third with one out.

Miley intentionally walked the home catcher, and Kershaw obligingly hit into the inning-ending double-play, but that brought Miley's pitch-count up to 70 after four innings. You could hear the bullpen wheezing gently in the distance. Meanwhile, Kershaw had settled down, the Montero strike-out opening a stretch of eight consecutive Arizona batters retired. That allowed Los Angeles to extend their lead on a solo home-run with one out in the fifth, to make it 3-1. As noted in the preview, the Dodgers had lost only one Kershaw start when they'd scored three runs, so that wasn't a good omen for the future of this one.

Ross got his third hit of the night with one out in the sixth, but Montero took care of that, erasing him with the team's 61st double-play of the season, which ties them with the Cardinals for the National League lead. It was Montero's 10th of the season, which gives him the team lead, and he's on pace to set a new franchise record in that area. The mark is currently held by Orlando Hudson, who had 21 in 2007. Miggy is projected, at his current rate, to smash that and finish with 25. I'm not sure where we can put him to minimize that. Maybe he needs to be hitting in the leadoff spot or something. :)

Admittedly, Miley got some severe help in that department too, with three double-plays in addition to Parra's outfield assist. That helped Wade get through six innings, allowing three runs on nine hits and two walks, with four strikeouts - a quality start, albeit at the very extreme non-quality end of the definition. He was lifted for a pinch-hitter in the top of the seventh, and although Wil Nieves walked to put the tying run on base, Pollock was completely flummoxed by Kershaw's curve, striking out on a pitch that bounced in front of him. Up until the ninth, the top third of the Diamondbacks order went 1-for-12 tonight, with no walks and four strikeouts.

The bottom half saw the major-league debut of Charles Brewer, promoted from Reno just a couple of hours ago. The scorebook will show a 1-2-3 first inning for the youngster [damn, I'm calling major-league players youngsters... But, heck, as noted in the previous post, he went to school with the SnakePitette. I feel very old], with a flyout to right, a strikeout and a groundball to short. What that won't quite capture is that his first pitch in the bigs was spanked deep to right field, only to be hauled in by Parra with a leaping catch, right at the fence. I'm pretty sure Brewer will be spending his first per diem on a nice dinner for Gerardo.

With the Dodgers' starter out of the game after the seventh, could the Diamondback use the "anybody but Kershaw" mantra to get back into the game? Not in the eighth, when they went down 1-2-3, and Brewer's second inning was considerably less successful than his first. Indeed, the Dodgers led off with three consecutive hits. Brewer got a ground-ball to third, which started our fourth double-play of the night, though this one required a serious assist from the first-base umpire, as the runner there was safe. Brewer was lifted, after 1 2/3 scoreless innings, and Tony Sipp stranded the two inherited runners.

At the time, it didn't seem like that was of any significance, but in retrospect, the umpire's call could have been decisive, denying the Dodgers a bases loaded, one down, scenario. Still, they had a two-run lead going into the ninth, and their closer, Brandon League struck out Montero for the first out. But then Prado singled, and Parra just missed a game-tying homer, but got a double to put runners on second and third Pinch-hitter Jason Kubel made it a one-run game on an infield hit, and a Didi Gregorius walk loaded the bases, still with one out. However. Pollock completed a miserable evening with a shallow pop-out and the D-backs were down to their final out: Bloomquist.

I wasn't optimistic, but Willie spanked the ball back up the middle: while a despairing dive stopped the ball from going to the outfield, pinch-runner Josh Wilson, who had replaced Kubel, was still able to motor all the way around from second, following the tying run (Parra) with the go-ahead one, to give the Diamondbacks a 4-3 lead. Better was to follow, as Goldschmidt added what would turn out to be an absolutely crucial insurance run with an RBI single. [SnakeLines: 2] Exit League, pursued by a chorus of boos, and even though Ross made the final out, the D-backs had come from behind in the ninth for only the second time this season.

Cue the Heath Bell Experience, with a two-run lead of our own now. That didn't last long, as Bell allowed a home-run to Juan Uribe, to lead things off. No problem. It's just a one-run save situation now. Bloop double just off the glove of Parra. Okay: tying run in scoring position, no outs. This is when Bell buckles down, right? Sacrifice bunt, fumbled by Prado = men on the corners, tying run on third, still nobody out. The Heath Bell Experience had the look of a ride condemned as unsafe for an Eastern European carnival, rather than the entertaining pastime we wanted to see. Maybe we can win it in extras?

Of course, I forgot the Experience has a separate gear for when there are runners in scoring position. A shallow fly ball, too close to the infield for any advance, got the first out; a strike out the second, which brought Adrian Gonzalez to the dish - and a certain inexperienced Dodger in the on-deck circle. The former grounded back to the mound, only for the ball to clank off Bell's glove, and visions of disaster exploded in my head, like fireworks. However, he recovered, threw over to Goldschmidt for the out, and the Diamondbacks avoided snatching defeat from the jaws of victory. Which, in turn, they had snatched from the jaws of defeat.

So, that's six straight Kershaw starts against the Diamondbacks, where the Dodgers have lost. The last couple of times haven't been his fault at all: one earned run over seven innings on each occasion. But it's been a delight to see the team scrap and claw their way to victory, particularly tonight, when all seemed lost. Defeat would have left us only one clear in the NL West, over the idle Rockies and Giants. Instead, we extend our lead back to two games, and just need to split the remaining two contests, to give us another series win on the road. 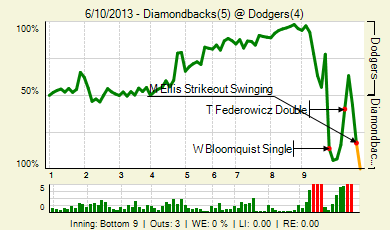 A nicely spread GDT, imstillhungry95, ahead of Rockkstarr12, with Fangdango and Clefo tied for third (and Zavada's Moustache just one back of them). Also present, on this night of a most-unexpected victory, were 4 Corners Fan, Airwave, BrokeNBattleX, , Diamondhacks, GuruB, Jim McLennan, JoeCB1991, JoelPre, Lozenge, PR151, The so-called Beautiful, Turambar, asteroid, azshadowwalker, coldblueAZ, hotclaws, luckycc, onedotfive, porty99, preston.salisbury, rd33, since98, since_98 and soco. Comment of the Night goes to The so-called Beautiful, for something which could was eerily predictive (almost), and very nearly poignantly tragic.

It's back to Dodger Stadium tomorrow night, when Ian Kennedy will take on Zack Greinke, with the first pitch at 7:10pm. I'll just leave this here: 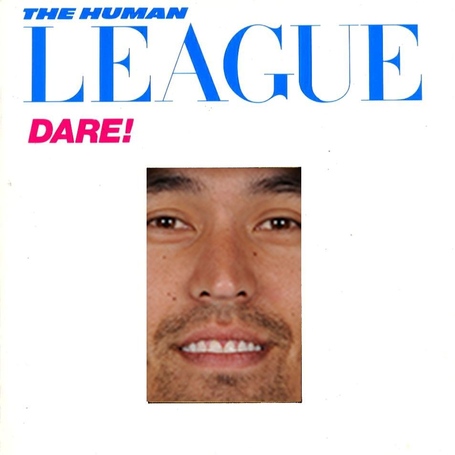