Earlier today, we noted rumblings concerning Brandon McCarthy's health. Sadly, it seems these have been fulfilled.

Share All sharing options for: Brandon McCarthy to DL, Randall Delgado up 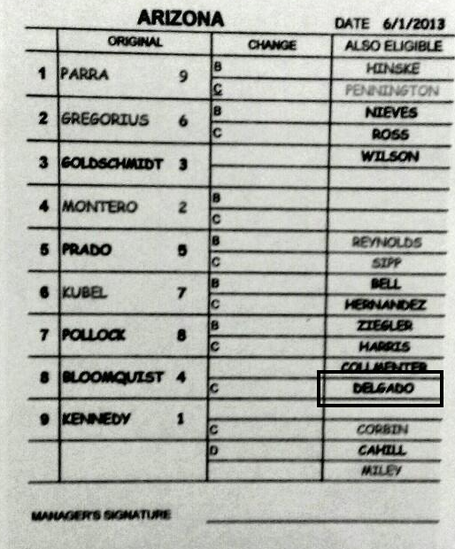 Hat-tip to sharp-eyed Matt Miller on Twitter, who saw the line-up card Tweeted by Steve Berthiaume, and noted that the bullpen included Randall Delgado, and did not include Brandon McCarthy. This appears to be supported by Ken Rosenthal:

Source: McCarthy to DL for #Diamondbacks. Delgado to take his place on roster.

And was confirmed a few minutes ago by Nick Piecoro.

Let's repeat what we said in SnakeBytes this morning.

This was just a sentence fragment in Nick P's recap: "With right-hander Brandon McCarthy’s condition uncertain — he intimated Thursday that he was going through some arm issues " But it set off alarm bells, as this has, traditionally, been the time of the year when McCarthy's stress fracture starts playing up. Digging back to Thursday's piece, I found this: "After being pounded for nine hits and six runs in 2 2/3 innings, McCarthy said he felt "just dead," and when given chances to declare his body and arm healthy, he was somewhat evasive. Asked if he felt OK, he said he felt normal given the time of year." It may be nothing. On the other hand...

Yep, unfortunately, it seems simply like the time of the year for McCarthy's shoulder to start bothering him once again. The prognosis for his recovery is highly variable. In 2009, he came back in September. In 2010, he didn't pitch at all. In 2011, he was back in early July, and last season, he missed little more than the minimum 15 days the first time, and about six weeks the second. Obviously, let's hope that this is one of the shorter stints.

The promotion of Delgado is likely to be a short-term affair, to give us some help out of the bullpen until McCarthy's next scheduled start on Tuesday in St. Louis. One imagines, though again, this is speculation at this point, that we'll see Tyler Skaggs called up for that, and likely, for as long as necessary. Whether that's until McCarthy returns, or Daniel Hudson is ready to come back from his surgery, is something we'll have to wait and see. It's definitely a blow to the D-backs: up until his last, apparently injury-affected start, McCarthy seemed to have turned things around. Looks like Arizona's pitching depth will now be tested more seriously than by Ian Kennedy's cut finger.