Diamondbacks 1, Padres 5: Kennedy gets hung out to die, offense DOA

Between the first and last outs he recorded, Ian Kennedy was dominant, allowing one hit in 5.2 innings. Unfortunately, before and after those...

Share All sharing options for: Diamondbacks 1, Padres 5: Kennedy gets hung out to die, offense DOA

Ian Kennedy's afternoon got off to a bad start, as he allowed the first three batters to reach, on a double, walk and RBI single. A pair of fly balls advanced the runner to third and scored the second run for San Diego, as the Padres jumped out in front quickly. He seemed to be having problems locating his pitches, with poor Montero getting beat up behind the plate: he didn't allow any more runs - indeed, he one-hit the Padres through wo outs in the six inning, but it took him over 50 pitches before he recorded the first out in the third inning. This always seemed like a laborous outing rather than a breezy one.

Didi Gregorius, our "no-hit" shortstop, wasted no more time coming back from the disabled list, than he did in his major-league debut, homering in his first at-bat, to lead off the third inning - his third shot of the year, pulling the D-backs back within one run. We should really have tied it up, as Kennedy followed with a double, to put himself into scoring position with no outs. But Gerardo Parra had poor at-bat fouling out to third on the first pitch, without advancing the runner. Though the Diamondbacks did succeed in loading the bases, on walks to Paul Goldschmift and Montero, Eric Chavez grounded out to strand all three runners.

Kennedy was walked to lead off the fifth, but we got more Parrafail as he bunted the ball right back to the pitcher who got the force. While Parra did redeem himself slightly by a successful steal of second, he was stranded there. The Diamondbacks wouldn't get another actual hit until Gregorius singled with one out in the seventh. He has an 8-game hitting streak to start his career with the D-backs, which trails only Willie Bloomquist's 10-game streak when he first appeared for us in 2011. But outside of Gregorius, when your other position players go 1-for-27, and the team is 0-for-6 with RISP...

Kennedy got the first two outs in the sixth, but going by the number of throws to first, he appeared to be increasingly laboring. As seems a fatal flaw of Kirk Gibson's, he left his starting pitcher out there too long. The 106th pitch of Kennedy's afternoon was deposited into the bleachers, for a two-run homer to make the score 4-1 to San Diego. Bizarrely, even though Matt Reynolds was fully warmed-up, Gibson then left Kennedy there to face a left-handed batter, who took advantage of the shortened fences in right, and the 111th and last pitch of Kennedy's afternoon met the same fate. 5-1 Padres. After the 100th pitch this year, hitters facing IPK are 5-for-9 with a double and two HR.

A small positive was the bullpen, which worked 2.1 hitless innings, in the shape of Matt Reynolds, Josh Collmenter and David Hernandez, with four strikeouts and one walk. But this was a very disappointing way to end the series, and the offense just didn't get the job done today, against a pitcher who has had more than his fair share of struggles in his previous starts. We'll hope for better in the Los Angeles series, which starts tomorrow night in Dodger Stadium. Trevor Cahill, who has quietly turned in a series of really good performances, will go for the Diamondbacks. 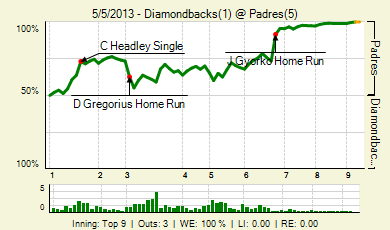 As noted above, it's up to Los Angeles tomorrow, and we'll be hoping for better from both pitching and offense there, than we got today.