Another day, another day-game, another game that's not on TV. Woo-hoo! Fourth consecutive day with any D-backs baseball here in Arizona! Still, nice of the D-backs to have a day game on Friday, so it doesn't interfere with 'charmer's social life. :)

Bloomquist activated, but not in the line-up. According to Steve Gilbert, it's because Bloomquist's flight was delayed by about six hours, so he didn't get in until 4am. You mean they didn't send Ken Kendrick's personal jet to pick him up? What kind of a cheap-jack organization is this? Perhaps more worryingly, Willie wasn't the only person who arrived at Chicago in the early hours of the morning. Gilbert also Tweets:

Umpiring crew for today's #Dbacks #Cubs game were in StL yesterday. Due to rain delays they left StL around 330 a.m. for drive to Chicago.

Ouch. That's a good 250 mile drive, so I'd be surprised if they arrived much before seven this morning. IF there are any blown calls today, you'll know the reason why.

The Diamondbacks saw their lead in the NL West cut to one and a half games last night, as the Giants managed to hold off the A's, though that was the only victory for anyone in the division. Yes the Rockies somehow managed to lose three of their four games against the Astros, which doesn't exactly leave me impressed with their chances of remaining contenders rather than pretenders. They've got a big series against the Dodgers over this weekend, while the Giants face our upcoming opponents, in St. Louis, so that will give us a yardstick to measure our own performance against the Cardinals, next week.

This one is not being televised either: Clefo pointed out that, with tomorrow's game being shown nationally on Fox, it's going to end up being close to a week between games called by Brenly and Berthiaume, the last time being the Memorial Day double-header. Though as someone who works in the evenings from Wednesday to Saturday, it's not as if I'd have seen much of them anyway! Pretty much the perfect storm of coincidence, scheduling and poor weather. I wonder what commentators do when they have such a long lay-off? But speaking of meteorology, the forecast for this afternoon in Chicago doesn't look good: 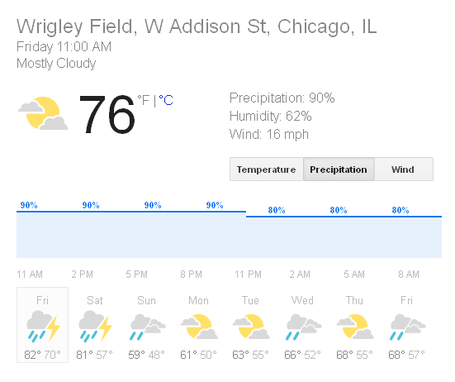 Yes, that's a pretty steady 90% chance of rain, all this afternoon and on into the evening. Now, I don't know how much that rain will be - whether it will be enough to stop the game from being played - and what the chances are of them sitting around into the evening. I know there are local ordinances which severely limit the number of night games the Cubs get to play. But if you're planning on hanging out for the game, you might want to have a book to hand, just in case....