Tonight, the Diamondbacks put on their "dress whites" with camouflage lettering and hats and honored the heroes who fought for America with their lives. On the field, there were a bevy of heroes: Cahill for going eight innings, Gregorius for his home run, and Pennington for his game-winning hit.

Share All sharing options for: Rangers 4, Diamondbacks 5 - Yu Get No Wins!

In game two of the scheduled double-header against the Texas Rangers, the Diamondbacks got off to an early lead. And by early, I mean, one pitch more than necessary: Gerardo Parra single, and Didi Gregorius tripled. A few pitches later, Eric Chavez hit a sacrifice fly that made it 2-0 with just one out in the 1st inning! Then Yu was all "I've had enough of this," and struck out Jason Kubel and Miguel Montero. Those were the first two of 14 strikeouts by Yu Darvish in 7 2/3 innings. His two other 14K games were victories, but here he was, down 2-0.

It was Trevor Cahill in the nightcap tonight, and while he wasn't nearly as nasty as Darvish (he only struck out four), he was what the team needed him to be. He scattered seven hits/two walks across eight full innings of work. The first run came on a double/wild pitch/sac fly combination in he 2nd, the second on an error by Cliff Pennington in the 4th, and two more in the 6th on a single followed by a fielder's choice. Cahill gave the bullpen somewhat of a break and stayed in the game for the 7th (struck out two) and 8th innings (induced a double-play ball). He kept the Diamondbacks in the game.

But Yu Darvish was busy keeping the Diamondbacks out of the game. He was dealing, scattered seven hits total, and struck out 14 D'backs. It was looking more and more like a double-header split, but the 8th inning changed that. Wil Nieves pinch-hit for Cahill and singled, and one out later, Didi Greorius tied up the game with a home run to right. Between that and the triple in the 1st, Didi had been involved in three of the runs! So Darvish soon comes out of the game, 7 2/3 inning, 14 Ks, and not in line for the victory.

Matt Reynolds and Brad Ziegler took care of things in the Texas 9th, and we head to the bottom with the weakest part of the lineup at the dish. But Miguel Montero doubled with nobody out to become an immediate threat. But A.J. Pollock struck out. Kirk Gibson played match-ups after that, sending up the ailing Martin Prado to be intentionally walked, and then..... as he said in the post-game press conference, he left Pennington in there "because I had a good feeling about him." With Paul Goldschmidt still on the bench. (Josh Wilson, the other bench player left, was the emergency catcher.) It surprisingly worked. Pennington laced a single down the first base line, and Montero scored easily from second base. Victory is ours!

The Diamondbacks thus have no game tomorrow, but play two in Texas starting Wednesday. And no, I'm not entirely sure why anyway. See you then! 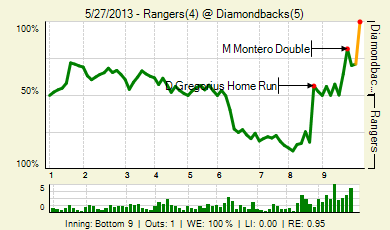