Arizona Diamondbacks fans got a sample of what the future of their pitching rotation might be like this afternoon, with the 2013 debut of Tyler Skaggs. And if this is any indication, it's as sweet as a triple-chocolate fudge-cake with caramel sauce and whipped cream. Skaggs faced a very potent offense in the Texas Rangers, and blanked them for six innings, striking out a career-high nine batters, mostly with a curveball which appeared to drop vertically through the strike-zone from above. While Tony Sipp and Heath Bell combined to make things far too interesting in the ninth, the Diamondbacks held on to take the opening game in the Memorial Day double-header.

He out-dueled follow left-handed pitching prospect Martin Perez, with the early couple of innings particularly significant in this regard. Skaggs allowed a lead-off single in the first and a one-out double in the second, in both cases the runner advancing to third with two outs. But both were met with strikeouts: in the first, Nelson Cruz was the first - but far from the last - victim of the Skaggs curveball [we have to find a name for that, like "Mr. Snappy". Ms. Curvey?]. And in the second, the first at-bat of Perez's professional career, ended exactly the way you would expect it would - in a three-pitch K. Man, I love AL pitchers trying to hit. They just try so hard...

Meanwhile, the Diamondbacks were doing a good job of being patient against Perez, who took 49 pitches to get the first six outs, and left the second inning down by three runs, all the runs coming with two outs. In the first, Martin Prado continued to rake, singling home Paul Goldschmidt. It was his seventh consecutive at-bat with a hit, tying the club record, last done by Eric Byrnes in 2007 [he's doubtful for tonight, after fouling a pitch off his knee in a later at-bat: he stayed in the game, but reports have him sporting a nasty bruise] And in the second, an A.J. Pollock double scored Wil Nieves, and after Didi Gregorius had reached on an error, Goldschmft singled Pollock home.

However, Harvey settled down after that, and through five innings, had thrown almost the same number of pitches as Skaggs - albeit surrendering Cody Ross's second home-run of the year [a long time coming, the first having been three weeks ago]. Meanwhile, Skaggs continued to motor: he wasn't impeccable, walking three guys, and his pitch-count was up there a little quicker than you'd have hoped. There was a Texas base-runner each inning through the fifth, but Skaggs finished strong, with a strike three on his 102nd pitch of the night. Final line: six innings, three hits, three walks and nine strikeouts, blowing away his previous career high of five.

As is often the case, fastball location was key: Skaggs threw strike one to 17 of 24 batters faced, which opened up his repertoire from there. He was able to throw his 12-6 curveball for strikes when he wanted to, but could also drop it in the dirt, and provoked some ugly swings and misses from the hitters. He seemed a very different pitcher from the one who posted a 5.83 ERA in six starts for the Diamondbacks last year, or even the one who allowed fourteen hits and eight walks in just nine spring innings, before being sent down. There was some suggestion that if Wade Miley continues to struggle, Skaggs should replace him, and on this afternoon's showing, you can see why.

The bullpen didn't exactly have its best outing. Will Harris allowed a lead-off single, then walked the next batter, but managed to rebound and put up a zero, albeit after coming within a ball from seeing Adrian Beltre at the plate as the tying run in the seventh. David Hernandez pitched the eighth, and allowed a one-out double, but nothing more, and the Diamondbacks added a fifth run, when Eric Chavez came off the bench to stroke a double. It should probably have scored two, but Gerardo Parra had delivered the daily TOOTBLAN, being thrown out on an ill-advised attempt to advance on a ball in the dirt. Still, 5-0 up: WP = 99.3%. This one's in the bag, right?

Not so fast. Tony Sipp had a poor outing, his BABIP regressing a tad, as he retired one of the four batters face, the other three reaching base on two hits and a walk, loading the bases with one out. That made it a save situation with the tying run in the on-deck circle, and that meant it was time for another ride on the Heath Bell Experience. Bell immediately took care of those three inherited runners: unfortunately, he did so by letting them cross home-plate, meaning the tying run was on base, still with only one out. Fortunately a strikeout [our 15th K, a number reached in a regulation game only three times since 2004] and groundout ended things satisfactorily. 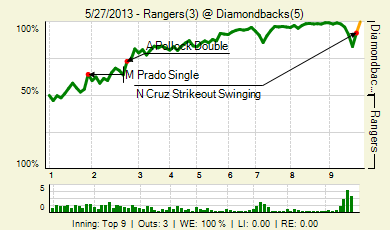 …you just can’t see them.

We'll be back shortly for the night-cap, in which Trevor Cahill takes on Yu Darvish, though I'm dealing with internet connection issues here, so the preview for that might be a bit... terse. We'll see... 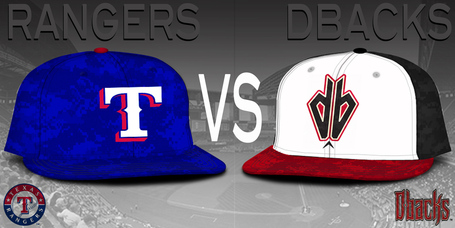