Share All sharing options for: Preview: Game #51, Diamondbacks vs. Rangers

Definitely an odd kinda day here, with two games to be squeezed in - to avoid too much cramming, the Fantasy Baseball report has been held over and will appear tomorrow morning, as part of our off-day coverage.

For today, it's a double-header kinda day, though I have to say, this feels less like the traditional one, and more like a fairly-shallow attempt by the team to cram two games on to a holiday and get more people at the park. Hence the clearing out of the park between games, which if I had tickets for both would leave me seriously peeved. A large part of the reason I'm not going, is the prospect of having to kill three hours or so outside Chase with the temperature in the mid-90's. I wonder if the Seventh Inning Grill is prepared for the occasion.

Both teams have called up left-handers from the minors to start the opening game of the double-header, and both will be making their season debuts. I'm keen to see how how the Diamondbacks' top prospect performs: he came into spring training supposedly competing for the fifth rotation spot, but that didn't last long. After a wobbly spring, he seemed to take some time to get adjusted down at Reno, but has been a lot better of late. It's the first time since 2005, Arizona has got through the first 50 games with just five starters - since then, we've always needed at least seven. [The rotation in 2005 was Shawn Estes, Brad Halsey, Russ Ortiz, Javier Vazquez and Brandon Webb]

Definitely feels like a B-lineup for the opening game, with Miguel Montero, Eric Chavez and Jason Kubel given the afternoon off. That perhaps makes sense, given what's to come - I'm sure they'll all be back in the line-up for the more difficult task to follow tonight, as we have to face Yu Darvish. That said, it probably wouldn't do to under-estimate Perez, who (in another coincidence) is the Rangers' top pitching prospect, just like Skaggs is for the D-backs. But, on the MLB Top 100 prospects list from before the season, while Skaggs was #9, Perez was all the way down at #88. He turned 22 last month; Skaggs will do so in July.

The Rangers come into this double-header with their bullpen already wheezing, because it took them 13 innings before they were beaten by the Mariners last night, with seven of their relievers having to combine for 7.1 frames of work. Only a couple had to throw more than 20 pitches, but it would be nice if we could solve Perez early, because the Rangers probably will not want to burn too many bullpen arms, even with their staff ace going in the night-cap, and Darvish average start has lasted two outs into the seventh inning. Patience could be the key, see if they can get Perez's pitch-count up early. 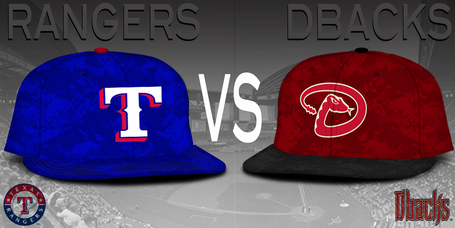