Today, Corbin's streak of not allowing more than two runs in a game came to an end, but the offense (some of it his own) bailed him out, and got him his 8th win on the season.

Patrick Corbin had a bad first inning in some aspects, and a pretty good one in others. He allowed a lead off double to Chris Denorfia, who was quickly moved to third on a sac bunt, and then scored on a Chase Headley double. That was it for the inning, though, and, by the time he got Carlos Quentin to line out, he only used six pitches. Not the best first inning ever, but not the worst either.

For instance, he could have had a first inning more like the Dbacks put up against Jason Marquis and the Padres. They got two quick outs, sadly, but those were followed by a Paul Goldschmidt double. Then, in a moment eerily similar to last night's game, Eric Chavez hit a two run home run to give us an early lead. Jason Kubel flew out to end the inning.

Neither team was done scoring yet, though, and it was the hometown nine's turn to score again in the very next inning. Unlike last inning, where the runs came courtesy of the long ball, this time it was small ball. Martin Prado got it started with a lead off single, his first hit of four on the day, very encouraging. The very next batter, Miguel Montero, brought Prado in with a double. 3-1 Dbacks. An A.J. Pollock single sent him to third, and after a Corbin sacrifice bunt, Geraldo Parra knocked in Montero with a sac fly to left field. 4-1 Dbacks.

Both teams took the third inning off as far as scoring, though both did get at least one baserunner. Corbin didn't really help his own cause in the fourth. He got Jedd Gyorko to hit a soft ground ball back to the mound. Corbin fielded the ball, and completely airmailed the ball straight into the stands. It was ruled a single, and Gyorko was given second on the error. Now, full disclosure, I did not watch the game on T.V. I listened to the game on the radio so I didn't see the actual error, but based off the reactions of the GDT and Greg Schulte on the radio, it was a really bad throw. And of course, the very next batter got a single which drove in the run. Corbin got the next three batters to make outs, but not before San Diego made it 4-2.

The Padres were back for more in the next inning, and this time, they struck for more than one. With one out, Evereth Cabrera drew a walk. Chase Headley flew out to Pollock. Then who should come to the plate other than Dead Horse 1.0. Carlos Quentin saw one pitch, and then put the second pitch into the stands. Tie game. Ugh.

Never fear! It wouldn't remain tied for long, as you probably guessed if you read the title or even the introductory paragraph. In the bottom of the fifth inning, Corbin made up for his struggles in the top of the inning by going ahead and batting in Pollock, who had gotten a double the at bat before, with a hit off Tommy Layne who had relieved Marquis in the fourth. Corbin also showed, though, that pitchers aren't very good at that whole offense thing by getting thrown out during the play trying to stretch a single into a double. Inning over, but Lead!

And that pretty much was it. Both Prado and Kyle Blanks added another RBI to their respective team's scores, but the rest of the game was largely drama-free. I would be remiss, though, if I didn't mention Heath Bell. He had a fantastic ninth inning for the save where he set down the Padres 1-2-3. 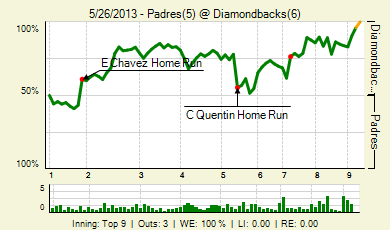 See you tomorrow for the Memorial Day Doubleheader! First game starts at 12:40!