Welcome to Dbacks 2013 number 48. Will Brandon McCarthy have another great start or will he get attacked by Lotus Shrimp? find out after the jump

Share All sharing options for: Diamondbacks 5, Padres 2: Double Plus Good

The game starts off with a quick 1st inning, as both pitchers sit down the opposing team in order. McCarthy runs into trouble in the top of the second when Carlos Quentin pummels a lead-off double to left field, then Yonder Alonso comes to bat and smacks a single to left field to score Quentin from 2nd. The Padres go down in order after that. In the top of the 3rd inning, Eric Stults hits a grounder to short and Didi Gregorious makes a fantastic running grab for the first out. The Padres go down in order after that. The game quiets down until the bottom of the seventh when Miguel Montero hits a ground rule double and Martin Prado hits a double of his own that scores Miguel Montero and ties the game up at 1-1. Parra grounds out but advance Prado to 3rd and Cliff Pennington walks. Wil Nieves comes in as a substitution for McCarthy and smacks a 2 run double to left and scores Prado from third to make the score 2-1 in favor of the Dbacks. A.J. Pollock decides to join the party with a single that scores Pennington to make the score 3-1 in favor of the Dbacks. Gregorious reaches on a fielders choice and Nieves gets thrown out at home. Paul Goldschmidt comes up and hits a double that scores Gregorious and Pollock that makes the score 5-2 in favor of the Dbacks. Cody Ross comes up and uses his evil powers to get a ground out and end the inning. David Hernandez comes in to pitch the top of the 8th and gives up a lead-off homerun to Everth Cabrera. The next two batters go down, but Carlos Quentin hits a double. Yonder Alonso flies out in the next at bat to end the Padres scoring threat. The Padres fail to make any more noise and fall to the Dbacks with a score of 5-2. 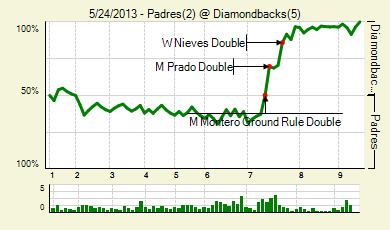