Welcome to the 46th edition of Dbacks 2013. Inside this recap you'll find tales of of horrid umpiring, fielding errors pitcher implosions and RBIs. Read on after the jump to get to the good stuff.

Share All sharing options for: Diamondbacks 4, Rockies 5: Angel of Death

The game starts out with the Dbacks going down 1-2-3 and so do the Rockies in their half of the inning. Things get, uh... Rocky in the bottom of the 2nd when Troy Tulowitzki hits a double to center to lead off the bottom of the 2nd and Rosario hits a single to put runners on the corners. Jordan Pacheco pops up and Nolan Arenado singles to bring Tulo home. DJ LeMahieu singles to drive home Rosario to make the score 2-0 in favor the of the Rockies. Things die down until the bottom of the third when Tulo hits a Homerun to make it 3-0 in favor of the Rockies. The game quiets down until the Rockies score again when Nolan Arenado reaches base on a throwing error by Gregorious, and DJ LeMahieu lines a double to left to make the score 4-0 in favor of the Rockies. There's another break in the action when in the top of the 7th Paul Goldschmidt gets things going by drawing a walk and Eric Chavez reaches first on a throwing error by Jordan Pacheco. Cody Ross draws a walk and Jason Kubel hits a two run double to left to make the score 4-2. Martin Prado singles on a ground ball to center to tie the game up at 4-4. This inning ends somewhat controversially when Adrian Johnson , in Angel Hernandez-esque fashion, makes two awful strikeout calls in a row. The pitching takes over for a little while until the tenth inning when "Stone Cold" Matt Reynolds replaces David Hernandez. Reynolds manages to get a 4 pitch strike out from Charlie Blackmon. Carlos Gonzalez comes to the plate and quickly doubles. Reynolds then intentionally walks Tulo to get to Wilin Rosario who hits a walk off single on the first pitch he sees from Reynolds which ends the game with a score of 5-4. 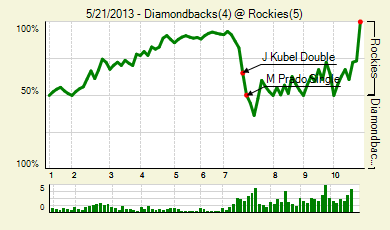