You thought that was March 17th? We're petitioning the Catholic Church to change it, as Patrick Corbin threw his first career complete game, a dominating 10 K performance. Arizona had a trio of players who equaled the entire Rockies' hit total tonight.

Initially, it looked like this was going to be a wobbly version of Patrick Corbin that we saw today, as he walked the Rockies' lead-off hitter and went to a full count on the next guy: 13 pitches and no outs. However, he got Dexter Fowler to line into a double-play, and it seemed to settle Corbin down. It wasn't until two outs in the fourth that he allowed his first hit, and he had faced one over the minimum to that point, the only other Colorado base-runner reaching on an error. Neither runner got past first base, and Corbin settled right back down after the hit, retiring the next eleven Colorado hitters in order.

He lost the one-hitter with a double that just stayed fair down the left-field line with one out in the eighth, and the shutout one batter later on another double. But he retired the final four he faced, to notch the second complete game by a D-backs left-hander in three days. He threw 97 pitches, more than three-quarters of them (74) for strikes, got strike one on 24 of 31 batters faced, and had more swinging strikes (19) than called ones (18) or pitches fouled off (17) tonight. He was also very economical, his 97 pitches tonight is the least for a complete game with 10+ K by an NL pitcher since June 2005, when Chris Carpenter took 95.

Really, watching Corbin work through the first seven innings, was the most dominating outing by a D-backs left-hander since the golden days of Randy Johnson. We haven't had many great southpaws in our history - after RJ, next on our WAR list are Brian Anderson, Doug Davis and Omar Daal, but I suspect that list will be changing quite a bit before long! Corbin's slider seemed particularly savage: witness the three-pitch K's, all on swinging strikes of Dexter Fowler in the sixth inning. None of the pitches reached even 80 mph, but the swings were progressively worse, and Corbin dotted the inside corner in a way strangely reminiscent of Johnson's "Mr Bitey." 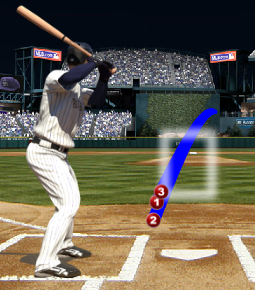 After going down in order for their first stab at the pie, the Diamondbacks got on board in the second. Eric Chavez drove the ball to the gap in right-center, and took advantage of a misfield there to end up on third-base with a triple [Troy Tulowitzki nodded approvingly]. Martin Prado had a chance to improve his RISP numbers, and get a tally for SnakeLines, but grounded out. After a walk to Jason Kubel, it looked like Miguel Montero had hit into an inning-ending double-play. However, the throw to first was high, lifting Todd Helton off the bag and Montero managed to reach base, as Chavez scored. A.J. Pollock singled, and Corbin ran the count to 3-0 but grounded out with two on.

No matter. The Arizona offense seemed to have found its "on" switch. They added two the next time up, on RBI singles by Goldschmidt and Chavez [Goldie getting to motor from first to third in between, as the Rockies' catcher demonstrated his defensive indifference on two wild pitches], and one apiece in the fourth and sixth innings, both of those being driven in by Didi Gregorius. Every Arizona starting position player except one had a hit by the middle of the fifth - no prizes for guessing who the exception was - and after the first, we had one or more hits in every inning. Through the middle of the eighth, the Diamondbacks had outhit the Rockies by the margin of 14-1.

By the time things had finished, we'd racked up 16 hits, one off the season high - and that came in the 16-inning marathon against St. Louis, so this was probably more impressive. Got to think that we should probably have scored more runs: since the start of last season, 36 NL teams have had exactly 16 hits in a game, and only two scored five or fewer runs. But it's probably significant that only two went for extra bases, with the other 14 all being singles. Gregorius, Chavez and A.J. Pollock had three each, Jason Kubel reached three times on two hits and a walk, and even Miguel Montero had a pair of late hits, so hopefully that augurs well. 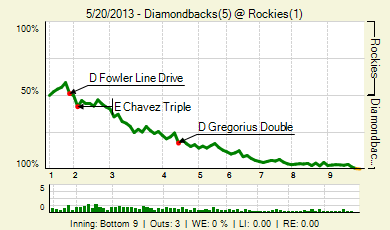 I for one, welcome our new Corbin Overlord

but i will admit, I snorted more loudly at BobRob12's response to Marc's "As Mark Grace would say if he were still around "Patrick Corbin... Stop it... Stop it""

if only he told the bartender that

Elsewhere, the Giants are beating up on the Nationals - could have foreseen that coming, considering Washington sent Zach Duke to the mound! - so it looks like our lead will remain at one game. It's back to Coors tomorrow, when Ian Kennedy goes up against everyone's favoritely-named pitcher, Jholszsdfnlkfvsnoler Chacin.