With today being an off-day, figured I'd bring SnakeLines forward, give you an extra few hours to get your pick in. No point holding on for this week's results either, which ended sadly early in the week. 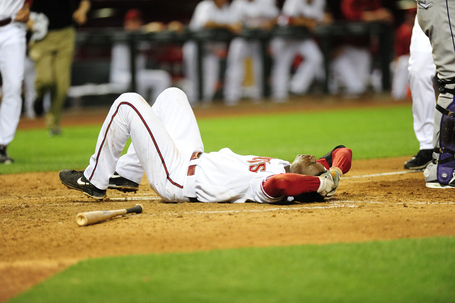 Not much more really needs to be said. The line was set at five hits, but one mis-directed (if not malicious) pitch from Josh Outman, and the curtain was lowered on Didi Gregorius's week. The good news is, he seems to have made a full recovery, and will likely be re-activated over the weekend, as the Diamondbacks start their road-trip in San Diego. However, from the SnakeLines point of view, it's exactly the same as if he had gone ohfer, in every game he missed. He did get a hit before...well, getting hit, but that was all. The line comes in at one, which is solidly under the line offered at the SnakePit Casino. So, who wagered wisely, and who betted badly?

A fairly well-balanced set of odds, with just a few more losers than winners - the former group included those who bet on the "push", of Gregorius getting exactly five hits. But definitely a few more points scored this week, so let's update the standings to reflect those.

AJV19 becomes the first sole leader on the standings to date, but there is a pack of eight players that are just one point behind, so that lead could easily evaporate by this time next week.

Time to focus on the bullpen - as if we haven't been doing that already, mostly in a weeping, wailing and gnashing of teeth kind of way. The line is the number of runs which our relievers will allow over the next week. There are a few factors here. Firstly, how many innings will they get to work? Perhaps playing into this, Wade Miley will be a two-game starter. And might there be an extra-inning contest? Next, where they are playing. The Diamondbacks get to leave the Belt-friendly confines of Chase Field, and head into Petco Park and Chavez Ravine, which may affect your estimates. Finally, note it's runs, rather than unearned, not that there have been many of the latter lately.

Stats to help you:

As usual, entry is via the comments, simply by posting "over" or "under". Get it right, and you'll get a point. Entries close at first pitch on Friday night.