Another off-day, time to report on the latest progress (or not), by the occupants of the Diamondbacks' disabled list.

Bloomquist's progress as he recovers from a strained muscle in his rib-cage hit a speed-bump early this month when he felt pain while swinging a bat in extended spring training on May 2. He reported last week, "I hadn't taken a swing with that intensity before and I wasn't ready for that type of intensity. It was just something to let me know that I'm not ready. It wasn't a grab or pull, just a little bit of pain." He has been hoping to be back by this point:, but the injury had not seen fit to co-operate: "We're just trying to find when is the right time to try it out. It's a tough injury in the fact that it feels good to me."

Speaking to KTAR on Tuesday, the plan according to manager Kirk Gibson seems to be. to get Bloomquist back into a game today, and see how that goes. "Then we'll talk about where we're going to send him out to play and for how long." It seems likely that will be quite a lengthy rehab assignment. For as well as getting Bloomquist up to speed - his last in-game action was March 26, in spring training - the intent, according to Gibson, is to "make sure he's healthy to play sustained games back to back to back."

This might be the last time we have to cover him since Spanky is working on a rehab assignment down in Visalia. That may seem like a bit of a step back, considering he was up with the Aces previously, but the reason is that the Aces were about to start having their pitchers hit again, rather than using a DH, and Eaton wasn't quite ready for that. So he went down to join the Rawhide, who are still designated hitter friendly. He went 0-for-11 in his first three games, but yesterday went 3 for 5 with a double, bunt single, stolen base and scored three runs. It also seems he'll be doing it all again before very long:

Taking in field out field today, and playing in the field on Friday! We are getting close! Everything feels great! #happytweet#wootwoot

Eaton started his rehab assigment in Triple-A on May 3, and these are limited to 20 days, which means he should be back with the team for the Padres' series at Chase, which starts a week tomorrow. One imagines that will likely mark the end of the A.J. Pollock era, at least for the time being.

Hill had another CAT scan on his hand at the start of the week, and the results were inconclusive, which is not good news. Gibson said, "It hasn't progressed far enough for him to do more strength exercises," and there's no timetable for him to return to even simple activities, like hitting off a tee. Gibson added, "Certainly he's going to be waiting. We'll try to get more growth on that broken bone." The original estimate for the time he would miss was 4-6 weeks, but a this point it seems all but certain to be more. He may not even be back with the team by the June 8th game against the Padres, which is scheduled to be his Cycle Bobblehead night: 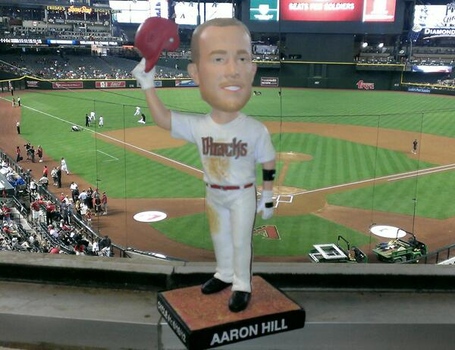 He threw three innings, covering 46 pitches, in a simulated game situation at Salt River Fields on May 11, and had a bullpen session at Chase Field on Tuesday. The latter had Hill standing in the batter's box for "realism", but of course not swinging, and the audience included Gibson. Not really more to add on this, but we're now into May, and ten months removed from his Tommy John surgery. However, there's not a rush to get him back - be hard pushed to figure out who he would replace in the rotation at this point!

Having dodged the bullet of elbow surgery, which would certainly have ended his season, Putz was instead diagnosed with a sprained ulnar collateral ligament, a strained pronator and irritation of the ulnar nerve. Though at the time of the injury, Putz said, "I’ve never felt anything like it before," after the MRI, he felt it wasn't too dissimilar from an issue he had in 2011, which cost him four weeks. Gibson shed some light on the diagnosis process: "They compared the MRI from 2011 and today and there is some change there, but not enough change where they're looking at doing surgery."

However, one suspects this version could last a little longer. According to Gibson, "He's certainly not going to be picking up a ball" for the next two weeks, and will then be re-evaluated, to decide whether he can return to throwing again, almost certainly on some kind of graduated program. In the meantime, he will do conditioning exercises to maintain jis general fitness, and Putz said he will "Try to be a good cheerleader, maybe get some pom-poms." Or poms. :)

Not on the DL yet, but you might have noticed he hasn't started the last two days, despite there being a right-handed opposing pitcher on the mound. He came in as a pinch-hitter during the game yesterday afternoon, walked and stayed in to run the bases, but did not look good doing so, even by the usually-lax standards of Kubel athleticism. Turns out he "recently aggravated the left quadriceps injury that landed him on the disabled list a week into the season," leading to caution from the team. He says he was fully fit when he returned in late April, but did some damage diving for a ball in the outfield a week or so later. We'll see how this plays out.