What a difference a day makes. I think Twitter might be a little calmer tonight, after the Massacre of Our Lady of Fatima which took place last night. This evening, Upton was held hitless, and the product of another KT trade drove in both runs for the D-backs.

Patrick Corbin extended his streak of uber-quality starts, with seven shutout innings of three hit ball. It was his eighth consecutive game working six-plus frames and allowing two runs or less. There have only been two longer streaks at the start of the season in the entire live-ball era [since the end of World War I]. Ubaldo Jimemez had a dozen straight, to open the 2010 campaign for the Rockies, and Bob Tewksbury had ten, for the 1992 Cardinals. Alongside Corbin with eight in a row is Fernando Valenzuela in 1981, which precipitated Fernandomania: maybe it's time for a little Corbinmania in Arizona?

This was not, it has to be said, his most well-controlled of outings, with a career-high five walks - he'd never even had a four-walk appearance before tonight. However, holding the Braves to three hits certainly was helpful: he also struck out five, and benefited from three double-plays. Probably the biggest one came in the sixth, where he walked the leadoff batter on four straight balls out of the zone. That brought the tying run to the plate, in the shape of Justin Upton, but he flew out weakly on the first pitch. The very next delivery, Freddie Freeman lined the ball hard to Paul Goldschmidt at first, who stepped on the bag for the inning-ending double play. Three outs on two pitches. Nice.

His night ended just shy of 100 pitches, which seemed fair enough, even if any lead involving our bullpen causes the sort of wet clamminess on hands, usually seen only during income tax audits, university finals and childbirth [or so Mrs. SnakePit informs me]. David Hernandez took the eighth, and the sweaty palms started after a one out single brought the tying run to the plate. He got Brian McCann to strike out swinging, but that only brought Justin Upton to the plate: he had been pitched very carefully, being walked twice and, as noted above, flying out. The world (or, at least, the part of it colored Sedona Red) held its breath. This is what transpired: 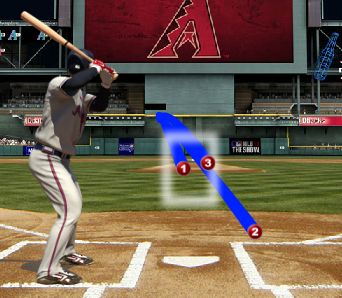 Three straight curveballs - numbers one and three for called strikes, the second provoking the kind of overswing from Upton which might have provoked sniggers from the executive box - and Upton was taking his bat back to the dugout, with the inning over. It was the kind of at-bat that hopefully will boost Hernandez's morale, and something on which he can build going forward, because a solid 8th-inning guy is really as key as the closer, because there'll be cases like tonight where the heart of the order is up in the eighth, not the ninth.

Which brings us to the Heath Bell Experience. Spectators should remember, please keep your hands inside the ride at all times. Unfortunately, Goldschmidt followed the same advice, and a lead-off ground-ball to Cliff Pennington at second, ended up clanking off Goldie's glove, for his second error - the first, curiously, also having come leading off the ninth inning in a save situation, four days ago against the Phillies. However, unlike his last chance, Bell didn't unravel, striking out the next two batters, before getting ex-Diamondback Chris Johnson to fly out to A.J. Pollock in center-field [preceded by shrieks of "two hands!" from myself and Mrs. SnakePit]

That closed out Arizona's third shutout of the season, and the first since April 14 in Los Angeles. However, as mentioned in the quick recap, it was also the sixth consecutive home game in which the offense has been held to three runs or less. There were certainly chances, with the Diamondbacks getting eight hits, but we were almost unable to capitalize on those. We had the first two on in the second, but Miguel Montero hit into a double-play, and A.J. Pollock flew out. Similarly, in the eighth, we had two on with one out, but Martin Prado grounded into our National League leading 40th.

However, the key word in the above paragraph is almost, as in "almost unable to capitalize." The damage was done in the bottom of the third, when Cliff Pennington singled and, one out later, Gerardo Parra doubled. It looked like Didi Gregorius had missed his chance, hitting a first-pitch offering down the line in left, only for it to land foul by a fraction of an inch. But two pitches later, he lined the ball back up the middle, to score both runners. We'd have one at-bat with a runner in scoring position the rest of the night - the Prado DP mentioned above. Didi was also flashing the leather, one particular web gem so deep in the hole, he almost threw the ball to first from behind third-base. 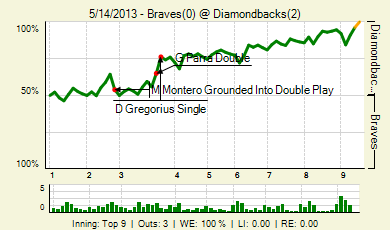 Apologies for the technical issues with SBN tonight, which definitely impacted the Gameday Thread. There's some faulty hardware at the hosting facility which is responsible for the Gremlins. Thanks to those who persevered through the double-posts and timeouts: Marc Fournier was the most persistent, ahead of JoeCB1991 and DbacksSkins. Also taking part this evening: AzRattler, Dutchfan, Jim McLennan, Marc Fournier, Rockkstarr12, The so-called Beautiful, TolkienBard, asteroid, baseballismylife, blank_38, deerhaven, hotclaws, imstillhungry95, onedotfive, porty99, snakecharmer and soco. CotD to Marc, even if his motivational speech resulted in a GIDP:

Don’t be scared by RISP. Just imagine they’re naked or something.

The rubber game of the series, with trade bragging rights at stake, takes place tomorrow afternoon at Chase, and it'll be a battle of underachieving aces, with Ian Kennedy going for the Diamondbacks, and Tim Hudson starting for the Braves. First pitch is 12:40, so be there or...er, have a small window open at work. :)