Arizona picked up their 10th one-run victory of the year tonight - they had only 15 all last season. It's beginning to feel curiously... normal?

Ian Kennedy's early struggles continued, as he allowed two runs in the first again. And it didn't take long for Philadelphia to get on the board, leadoff hitter Jimmy Rollins cranking the very first pitch of the night out of the park - meaning Kennedy had allowed home-runs to three consecutive batters. We were lucky to exit the inning only down by two, considering Kennedy allowed a home-run, a double, two singles and a walk in the frame: he was helped out by Utley getting himself Parra'd out at third, after hesitating as he rounded second. The inning only took 22 pitches, but the Phillies weren't missing much in the zone.

Arizona did get one back immediately, a two-out double off the bat of Eric Chavez scoring Paul Goldschmidt all the way from first. Goldzilla either didn't see or ignored the stop sign thrown up by Matt Williams, but managed to score fairly easily, since the throw was off-line. Probably good, considering Cody Ross then made the final out of the innings. After early wobbles, both pitchers then settled down. Kennedy didn't allow a hit after the second, though most innings weren't pristine. The Diamondbacks fared worse still, Chavez having our only hit through six. They did get two on with one out in the fourth, on a pair of walks, but Jason Kubel hit into a double-play to end the chance.

Kennedy ended the night after the seventh (I was quite surprised to see him come out for that final frame) and at 106 pitches, having rebounded from a very shaky beginning to deliver a quality start. His final line was entirely respectable: two runs over seven innings, on six hits and three walks, with four strikeouts. Probably close to being his best outing since Opening Day, although I do still have concerns, particularly about his K:BB ratio. Over the past two seasons, he struck out 3.50 batters for every one he walked, but after tonight, his ratio this year is a much less impressive 37:20, which works out at 1.85 strikeouts per base on balls.

Another double play, this one off the bat of Paul Goldschmidt, ended the sixth for the Diamondbacks. If it seems like we've hit into an awful lot of those, that's because we have. The ones by Kubel, Goldschmidt and another by Gerardo Parra in the eighth, were #34, #35 and #36 for Arizona on the season which, at the time of writing, would appear likely to be most in the National League (the Cardinals and Marlins each have 34, with the latter still playing in Los Angeles). There's no particular culprit: Goldschmidt, Miguel Montero, Martin Prado and Josh Wilson all have five apiece.

The Diamondbacks got their second hit of the night with one out in the seventh, Cody Ross singling. He alertly tagged up and moved to second on a fly out by Kubel, which brought Prado to the plate for an at-bat with runners in scoring position. Between last night and this evening, we had gone hitless in the 12 previous opportunities there - and, of course, Prado was riding a stunning streak of 0-for-29 futility there, going all the way back to Opening Day. Of course, he singled on a line-drive to right-field, driving home Ross to tie the game, though any credit was somewhat erased by Martin getting himself picked off first immediately afterward.

So, it was effectively a reset, with Ian Kennedy off the hook for what would have been a tough loss, and the bullpens now up to duke it out over the remaining two innings. Enter Will Harris, the newest Diamondback. Just don't blink, or you'd have missed his four-pitch debut appearance, resulting in a strikeout. Tony Sipp followed, getting Ryan Howard to strike out and Carlos Ruiz to fly out in the top of the eighth inning. And in the bottom, Montero unloaded a great deal of frustration, clobbering the first pitch he saw on a line-drive to right-field, giving the Diamondbacks their first lead of the game. It was his third home-run of the year.

Oh, look. It's the ninth inning, with a one-run lead for the Diamondbacks. Who would ever have thought it? With Heath Bell having saved games on each of the previous three nights, Arizona turned to David Hernandez - who had yet to be credited with a successful save opportunity this year. Things did not get off to a good start, the Phillies' leadoff hitter reaching on an error by Goldschmidt - his first of the season - and this was followed by a single. A sacrifice bunt moved both runners over, but with the tying run on third and one out, Hernandez got an infield pop-up (Chavez and Didi Gregorius almost colliding) and a ground-out to first, extending our winning streak to five games. 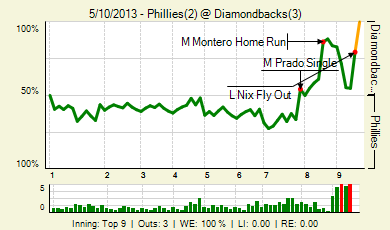 Across the preview and GDT, imstillhungry95 just edged Rockkstarr12, with Zavada's Moustache not far behind. Also taking part tonight were: AJV19, AzDbackfanInDc, Clefo, Dutchfan, GuruB, Jim McLennan, JoeCB1991, JoelPre, Lozenge, Marc Fournier, Muu, Paper Clip, SongBird, The so-called Beautiful, Turambar, UAwildcats, asteroid, azshadowwalker, blank_38, coldblueAZ, hotclaws, rd33, shoewizard, snakecharmer and soco. I'm tempted to name and shame the Debby Downers who were just about writing this one off in the first inning. But instead, I'll give it to this prescient gem from JoeCB1991, timed at about the fifth inning.

You can't keep playing nothing but 3-2 games forever though

O RLY? There are 25 men and a manager who would apparently beg to differ with you on that one.... Anyway, it's Trevor Cahill vs. Cliff Lee tomorrow evening at Chase Field, in what should be a good pitching match-up. I'm expecting another 3-2 victory, personally.