It was probably two games into the 2013 season, when he was 0-2 with an ERA just short of six, not having got through six innings in either start. But since then, he has allowed four earned runs in 27.1 innings for a 1.32 ERA, and even when struggling with his control (as last time), he has found a way to work through it. Tonight, the big difference was Cahill getting quick outs: the first two innings required only a total of 15 pitches, and that was pretty much the pattern going through the game. He wasn't trying to strike every hitter out, and was quite content to let them put weak ground-balls into play, and led the defense make the plays behind him.

The only time there was trouble for Cahill was in the fourth, when the first two hitters for the Giants singled. One out later, Cliff Pennington made a stellar play on a dive into the hole at short, and also managed to throw the ball over, getting the force at second. Cahill got the final out without trouble, and that was it. The Giants sent the minimum to the plate from there through the end of the eighth inning, with the only baserunner (Cahill's sole walk of the night) erased by a double-play. Through those eight innings, Cahill had thrown a mere 82 pitches. and with his spot coming up third in the bottom of the eighth, Gibson had a potentially-thorny decision to make.

For the game was scoreless at that point, with Madison Bumgarner having matched Cahill, zero for zero, through the first seven innings. The only times Arizona got a runner into scoring position against him, was with two outs in the third - A.J. Pollock grounded out - and two outs in the fourth, when Alfredo Marte flew out. After that, just as Cahill had done, Bumgarner faced the minimum through the next three innings: the only base-runner, was a Cody Ross walk, to lead-off the seventh, but he was erased by Miguel Montero, with his team-leading fifth double-play of the season.

However, Bumgarner had thrown considerably more pitches than Cahill (102 through seven), and when his spot came up in the top of the eighth, Giants' manager Bruce Bochy opted to use a pinch-hitter instead. As so often happens, it was a case of "anyone but Bumgarner" for the Diamondbacks hitter. The very first hitter seen by the San Francisco bullpen was Josh Wilson, whose last major-league home-run was in June 2011. Naturally, he uncorked an absolute no-doubter into the left-field bleachers to give the home team the slimmest of leads. Cahill batted for himself, and went out to start the ninth inning.

He allowed a lead-off single, and for some reason, despite a thoroughly manageable pitch-count, that was enough to prompt a change of heart by Gibson, even though Cahill had been dialing up the ground-balls. Enter J.J. Putz: the runner stole second, but J.J. got a strikeout for the out. However, you know the problem with Putz was poor control of the splitter, not splitting as it should? That's just what happened, and the Obese Raccoon ran in to it, depositing the ball into the stands for a two-run homer, giving the Giants the lead. One of those runs was charged to Cahill, giving him a line of eight innings pitched, four hits and a walk with five strikeouts. Season ERA: 2.61.

Putz, however? One definition of insanity is "repeating the same actions, over and over, hoping for a different result." That's Putz's fourth blown save in nine attempts. Until J.J. can demonstrate, absolutely, the ability to locate the splitter when he needs to, he should not be closing games. Period. We have plenty of other alternatives who have done better, consistently: I thought that was the point of having them. David Hernandez would be the obvious choice. Heck, I'd even be happier seeing Heath Bell - which is a bit of a devastating indictment on how far Putz has sunk in my estimation, given the Opening Day damage Bell inflicted on my psyche. 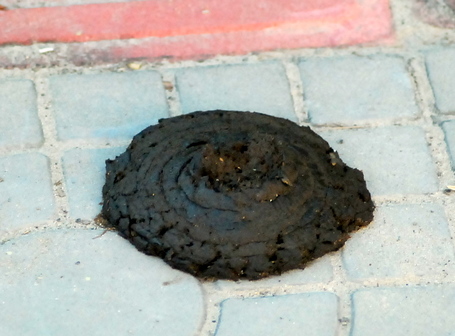 Here's a name from the past: Dbackskins led all commentators, though was clearly slacking, since he only had 18 more than second-placed EzioExManAZ. I remember the days when he'd have had as many as everyone else put together. Songbird was third, and also present: 4 Corners Fan, AJV19, Blasphemer, Clefo, Fangdango, GuruB, Jake6233, Jim McLennan, JoeCB1991, John Baragona, Lozenge, Majabe, Marc Fournier, RedBirds, Rockkstarr12, SongBird, The so-called Beautiful, Zavada's Moustache, asteroid, blank_38, coldblueAZ, dbrowell, jacktheboxboss, middle13, onedotfive, porty99, pygalgia, rd33, since_98, snakecharmer, soco and txzona.

Most rec'd was my comment on how this was going to be a short recap, which now has a sad poignancy: thanks to Putz, it'll end up being not far short of the usual 1,000 words. So, let's give it to dbrowell, for his sardonic comment on our "new" #10...

Oh, well. I'm sure I'll feel better calmer slightly less homicidal about this one in the morning. The D-backs will try to do what they have done eight times already this season, and win the series finale. This time, they'll be trying to avoid the sweep. We'll need better pitching - or better luck, or something - from Brandon McCarthy, but we do have Tim Lincecum pitching for the Giants. I'm sure that will mean Paul Goldschmidt will be down at Chase Field by about seven in the morning.