Cahill's second outing was similar to his first, interspersing streaks of dominance with spells where he couldn't seem to find the strikezone. He gave the Pirates a three-run start early on, and though the D-backs fought back to tie it, their last hit came with no outs in the fourth.

Trevor Cahill started, though I use that verb in its loosest sense, because he was awful in the first inning. He was missing his spots, leaving his sinkerball up in the zone, when it was in the zone at all. Admittedly, he was squeezed by home plate umpire Bruce Dreckman - Trevor should have been out of the inning with a called strike three on Russell Martin and only one run allowed. Both he and tonight's catcher Wil Nieves were on their way back to the dugout before Dreckman called it high. However, the bottom line is three hits, two walks and Pittsburgh had matched their season high for runs in a game, before Cahill was out of the first inning.

The Diamondbacks, however, clawed their way back in. Paul Goldschmidt led off the second with a double, and came home on Wil Nieves' first hit of 2013. The third proved even more productive. Astros' starter Wandy Rodriguez was forced out of the game with what seemed to be a thigh strain of some kind, just after Gerardo Parra reached on an error with one out. Martin Prado singled, Aaron Hill walked and Goldschmidt just missed his first grand-slam, flying out to the warning track in left for a sacrifice fly. Alfredo Marte followed up with his first hit in the major-leagues, driving in Prado and tying the game up. Hit the reset button, folks.

I was feeling pretty confident at that point. The Pirates starter had left the game, the replacement looked hittable, and Trevor Cahill settled down, facing the minimum from the second through the fourth innings. Things looked particularly promising after back-to-back hits by Nieves and Cliff Pennington led off the bottom of the fourth. However, Cahill bunted the ball too firmly back to the pitcher, and the lead runner was nailed at third. We failed to score, and a one out triple by Pittsburgh in the fifth, came home on a sac fly, giving them back the lead. It was Cahill's last frame: he ended with four hits, three walks, a hit batter, though another solid K-rate, K's in five innings.

Hopes of cashing in quickly against the soft underbelly of the Pittsburgh bullpen proved futile, as Justin Wilson shut the Diamondbacks down very effectively, with three innings of no-hit ball. The only baserunner we managed was Gerardo Parra, who got himself hit by a pitch, only to be erased immediately when Martin Prado hit into a double-play [there are times when less contact is better than more...] Prado still hasn't walked this season: however, he has a heck of a long way to go before he reaches the D-backs record for walkless games to start a season. That would be Rusty Ryal's 67 in the 2010 campaign.

The final two innings were equally uneventful for the Arizona batters, as they were retired in order both the eighth and ninth times up, not even getting the tying run to the plate to provide some hope of late heroics. It was a seriously damp fizzler, with the team being no-hit over the final 18 outs by a selection of Pittsburgh relievers. They didn't exactly make the visitors work hard, with the final five innings requiring the Pirates bullpen to throw a mere 60 pitches on the night. On our side, we got scoreless innings from Matt Reynolds and Brad Ziegler; Josh Collmenter allowed his habitual run per appearance, a laser solo home-run to right in the eighth.

Tonight was the first game of the $5.32 offer, where that amount gets you an upper-level ticket, for any of the three games against the Pirates. It would seem generally to be a good deal, but tonight's performance from Arizona was so flat and generally uninteresting, that even such a small sum still seems like an overpay. 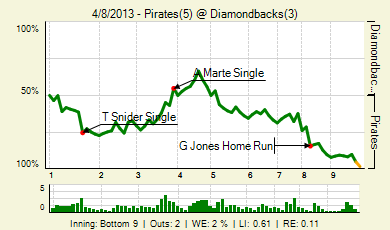 Me: They are lacking crispness tonight.

Mr asteroid: If they were lettuce, I would throw it away.

We will reconvene tomorrow night, same bat-time, same bat-channel [except, I think it's on FSAZ+, so scratch the last!], to watch Brandon McCarthy make his second start, going up against the Pirates' James McDonald.