"I gotta fever, and the only prescription is more Kubel..."

Save to say this went a good deal better than the previous time we faced Mike Fiers, when he blanked the D-backs for six innings. He didn't even get two outs today, before the Diamondbacks scored, Martin Prado scoring all the way from first, on an Aaron Hill double down the line in left (not exactly well-played by the Brewers defense, something of a theme this afternoon). However, this one will go in the books as a come-from-behind victory for Arizona, with the main charge coming in a three-run fourth that turned a one-run deficit into a two-run lead. Paul Goldschmidt led off with a double, and Jason Kubel uncorked his first long-ball of 2013, by the right-field foul-pole.

Arizona really didn't look back after that. Three more singles, the last one by Gerardo Parra, drove in another run, and the fifth inning extended the breathing room when Goldschmidt followed up a Montero walk with his second homer of the 2013 season, which delivered tacos to the needy tomorrow (from 4-6pm. in participating restauirants, with the purchase of a large drink). The seventh saw two more, with the help of catcher interference on Eric Chavez [the 12th such case in team history - oddly. Craig Counsell has five of them!] and the third of the Brewers' three error in the game. Aaron Hill capped the Diamondbacks' scoring off with his first home-run, in the eighth.

This was an excellent performance from the D-backs, combining power with good plate discipline. In 43 at-bats, they only struck out three times (and one of those was by the pitcher). It's something they haven't done in that many ABs, since the end of the 2004 season, and also kinda cool to see them have as many home-runs as K's. Seven of the eight position players had multi-hit games - only Montero missed out, and he still reached base safely three times, on a hit and a pair of walks. Parra had two hits and a free-pass, improving his on-base percentage for the season to .500, with a 1.333 OPS.

Patrick Corbin was shaky, but I'll take the kind of shaky from your #5 starter, which results in two runs over six innings, any day. It took a good grab from Kubel, making his second start ever for the Diamondbacks in right-field, to help keep the Brewers to one run in their half of the first, and a two-out RBI double in the second then gave Milwaukee the lead and put men on second and third. Corbin escaped that jam, beginning a sequence of eight Brewers sat down in a row. He stranded two more in scoring position in the fifth, but finished with a double-play on his 97th pitch of the night, to end the sixth.

Overall, the final line was eight hits and a walk over six innings, with two strikeouts and a pair of runs, both earned. There was some suggestion his strike-zone was getting squeezed a bit by the home-plate umpire in the early stages, but Corbin also kept the Brewers in check when he needed to most, as they went 1-for-7 with runners in scoring position tonight. That was particularly crucial in the early stages, while the score was still close, and we waited for the Arizona offense to find its rhythm, which they eventually did.

Ok, admit it. You were holding your breath when Heath Bell came in to pitch the seventh inning, weren't you - even with a six-run lead. After the debacle which was his first appearance, that's the kind of margin we wanted to see for his second, and he faced the minimum. There was an infield single with one out, but Bell did his best Brad Ziegler impression, getting the next batter to hit into the second double-play of the game. The outing shaved more than sixty runs off his ERA for the season, though since it remains above twenty, there's still work to be done before I have any degree of genuine confidence.

Our lefties closed things out: Matt Reynolds retired his tenth and eleventh batters in a row, before an infield single ended his streak - he still posted a zero. Tony Sipp came in for the ninth, and retired all three batters faced, with a pair of strikeouts. It seemed like good use of the bullpen: the A guys who worked last night (Ziegler, Hernandez and Putz) were all rested, and there was no need to ask Josh Collmenter to take the mound, though he reported being ready if needed. Fortunately, the offense, which reached 15 hits for the third time in just five games (last year, it took 44 games for the third 15-hit performance!), helped make sure that he wasn't. 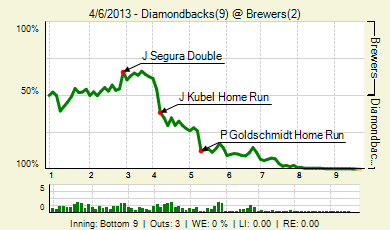 "Hey Bill, I found a couple of banana outfits lying around the house, but I can’t go to the Brewers game by myself, because otherwise I’ll look like an idiot."
-That guy

It's back to Milwaukee again in the morning, as we try to beat Yovani Gallardo - something we seem to have difficulty doing in the past. But we have Ian Kennedy going for us, and having taken the first two games, it's pretty much all good, regardless of the outcome.