Ok, perhaps it's not a "real" World Series ring, but it is a genuine facsimile, if there's such a thing. And by that, I mean it looks like the one the players got, not the one handed out at Chase...

Share All sharing options for: Diamondbacks Thing of the Week: 2001 World Series Ring

The ring is studded with bling high AAA graded CZs ,all are prong set ,Not glued .

Typos and Engrish, seller's own. I'm still not sure what "environment protect" means, but it is nice to know the ring is studded with actual "bling.," not that terrible faux bling some Ebay sellers try to pass off as the real deal. The ring in question, going by the number and name on the side, appears to be based on the Big Unit's, but the seller is prepared to work with you to customize that, so you don't have to go round, pretending your name is "Johnson" every time you wear it. Pity it's not Rod Barajas's, however: that would at least have explained where that had been for the past four years.

It's not the only Diamondbacks ring for sale on eBay: there are quite a few others, mostly the ones handed out at Chase in 2011, during the 10th anniversary of our World Series victory The prices for these vary: the top end, at over $150, is quite nice, because it includes not just the 2011 ring, but also the one given out to fans after the original triumph. Prices for the 2011 version seem generally to sit around $50-60, which still seems pricey for a stadium giveaway, though I have to say, it has to rank among the nicest ever [yes, I've got one, courtesy of Mrs. SnakePit who was at a State Farm recruitment event that day!] But there is also this for $42.99, which I don't recognize at all. 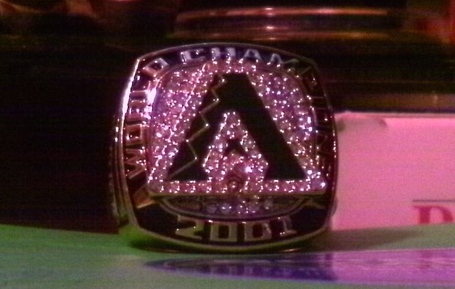 If you really want to go down to the bargain basement, 99 cents (plus this shipping, which is only five times as much as the actual ring!) gets you this 2001 Arizona Diamondbacks World Series Championship Ring 18k Gold. Oops. Did the seller "accidentally" forget the word "plated" off the title? Silly them... Apparently, this one is also encrusted with "authentic AAA Cubic circonias." I don't know if those are the same as cubic zirconia - this seller is in Missouri, rather than Hong Kong, so I'm not quite sure what their excuse is.

Of course, you could always go to the other extreme, splashing out and buying the real thing? That'll set you back $2,250, and that's not even for the fully tricked-out version given to the players, but the rather more restrained (read: cheaper) version given to front-office staff [someone whose initials were RJM, it would appear]. If you want a yardstick of how much a player's one would cost, the 2009 one given to A-Rod's alleged drug mule, his cousin Yuri Sucrat, at Rodriguez's request, is currently up for sale, with bidding close to $45,000. Maybe you could contact D-backs fan Jay Prechel, who won his ring in a team contest, and make him an offer?