I don't know which is more irritating. A game which was out of control from the beginning, or one which looked out of control, came back to look promising, then melted down in a welter of late walks. Hey, I'd have had to watch it anyway, I suppose.

Share All sharing options for: Diamondbacks 4, Giants 6: Inning of Sinning > Inning of Winning

I hate it when I have to recap a game that seemed out of reach almost from the moment it starts. I was a little late getting to this one, as we had to polish of Vikings, as mentioned in the preview - not that late, but I turned it on in time to see the Giants already possessing a 2-0 lead. This just didn't have the feel of a game I wanted to have to watch. It might have been see Miguel Montero continuing his quest to lead the league in loudly-unproductive outs, or Kennedy allowing a home-run to lead the Giants' second inning off too. Or perhaps, after we got two men in scoring position, Kennedy striking out, swinging at a pitch that, literally, landed in the other batter's box.

Kennedy's day went downhill after striking out the leadoff hitter, as the next three Giants all reached, on two singles and a walk, and two then scored, on a sacrifice fly and single. The home-run mentioned above extended the visitor's lead, and it could have been worse, with some hard-hit balls becoming outs, in particular one which required Cody Ross to make a leaping catch up against the outfield wall. Through three innings, Kennedy had allowed five hits and two walks: at just shy of 60 pitches, it looked like it was going to be another busy night for the Diamondbacks' relief corps. Hey, most of them got yesterday off, they'll be fine...

Through three innings, this was the Matt Cain we didn't want to see. While his location was still wobbly, he was getting a lot of swings and misses (not just from Kennedy), and when balls were put into play, they seemed to be hit right at defenders. However, things changed abruptly in the fourth inning. Kennedy set down the Giants in order, and Cody Ross drew a leadoff walk. Hardly had Bob Brenly then finished saying, "I like the match-up here - hang a slider, and it's 3-2," and Jason Kubel delivered (albeit on a fastball), depositing it into the bleachers. Eric Chavez followed immediately with another shot and, Martin Prado added the third homer of the inning with two outs.

Kennedy made it more "interesting" - from a neutral stand-point at least - in the fifth, with one out allowing a single, wild pitch, RBI single to tie things up, and a walk. However, he then got a double-play ball to end the inning, though replay showed the runner at first was safe. Giants' manager Bruce Bochy got himself tossed for discussing this matter. Paul Goldschmidt drew himself a walk to start out half of the frame, and then stole second, but Montero couldn't advance him, striking out, so Cody Ross's deep fly-ball was in vain, and the defensive shift took an RBI hit away from Chavez.

Kennedy ended up going seven innings, an outcome which seemed distinctly unlikely after he allowed his fourth hit and third run of the night, before recording an out in the second. It wasn't the greatest of outings, to put it mildly - seven hits, three walks and only two strikeouts. But he settled down admirably, with only one run allowed over the final 18 outs, and that helped ensure Matt Cain, who lasted only six, wouldn't get the win. After a scoreless bottom of the seventh, ending with Paul Goldschmidt arguing he fouled off strike three, neither would Kennedy. But would the Giants' losing streak in his starts continue? That would be up to the respective bullpens.

Brad Ziegler was in trouble from the get-go, allowing a lead-off double, which tagged up and advanced to third on the first out. Goldschmidt made a great snag of a hard-hit ground-ball to get the second out and keep the runner from scoring, and it looked like Ziegler might escape. Except, he walked the next batter. Then, the next one, to load the bases. And fell behind 3-0 to the following hitter. He got one strike, but the next one was center-cut, and went straight back up the middle to score two runs. Ziegler seemed incapable of retiring, or even throwing strikes, to left-handed batters: all told, he threw 13 balls and only eight strikes. Most unZiegleresque.

Admittedly, there's a good case to be made that Ziegler should not have been facing as many left-handers as he did. We often tend to forget it, but his career splits demonstrate where his strength lies. Let's remind ourselves of those, before going through what happened in the eighth inning tonight.

Yep. If it wasn't already obvious, Ziegler retired both right-handed batters, but every one of the four left-handers faced reached base against him. Why do we have two left-handed pitchers in the bullpen, if they're not going to be used to...oh, I dunno, get out left-handed batters in crucial situations? Especially once it was clear Ziegler had issues throwing strikes [albeirt not helped by an umpire's strike zone which was very much larger for the Giants' reliever in the bottom half of the inning] I have to agree with some GDT comments (more on which later), that the strange management of our relievers by Kirk Gibson likely cost us a chance at the win here.

We got the tying run on base in the eighth, courtesy of a Ross single, but Jason Kubel struck out on a pitch that was absolutely not a strike and Alfred Marte... Well, I trust I needn't finish the sentence. Cliff Pennington singled to lead the ninth inning off, giving the offense three last whacks at it, but Eric Hinske, Prado and Gerardo Parra came up empty. The last-named ended his 13-game hitting streak, going 0-for-5. There were two-hit nights for Prado and Pennington, Goldschmidt drew a couple of walks, while Ross and Kubel each reached base safely twice, with a hit and a walk. 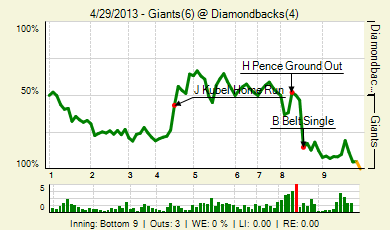 You're right, I agree and I apologize, but what if we miss the playoffs by one game?

This is how I view it. This is the MLB, the top of baseball, like NASA is at the top of the science food chain, right?

So here’s the analogy. Being an MLB manager is, to baseball, like being a NASA scientist is to the field of science, or mathematics. And my opinion is, if you’re a NASA scientist, but you can’t calculate 10+10 correctly, even for just one day, if you get something that obvious wrong, that is unforgivable. You don’t get a pass for that.

And in this era of baseball, matching lefty-lefty and righty-righty when managing a bullpen is the equivalent of calculating 10+10 for a scientist. This is supposed to be common knowledge. I cannot forgive that mistake being made at this point, not even once.

Look, you’re right, maybe this game won’t matter in the standings by the end of the season. It’s possible. But what does it say about our manager that he would make this mistake, even just once? I understand it’s just one game, and I agree with you and understand your point entirely. But I just view it as unforgivable, at this point. It’s too obvious a mistake for someone to be making at this level of baseball. It says way too much negative about him that he’d even make this mistake once.

And I can’t get over the fact he would do it against the biggest rival, and biggest competition for the playoffs, in a 4-4 game in the 8th inning.

So, yes, I’m overreacting, I’m getting too mad, I’m new on this blog and just blowing up with long posts complaining all of a sudden, yes I’m being too negative, yes it’s just one game, yes it might not even matter. You’re absolutely right about all of that, and I apologize for being so negative. But that’s the explanation for why I am. I just despise throwing away a game on the most obvious mistake, and unlike you, I consider it unacceptable at this level of baseball even in just one game. It infuriates me to no end to see them blow the game with a righthanded sidearm pitcher lobbing pitches in to three straight lefthanded pitchers, and then have the Giants, in almost a "suck it" type gesture, immediately bring out Lopez to strike out our two left-handed hitters in the inning and stifle any hope of a comeback.

We're back tomorrow night, when I'll be pinch-hitting for BattleMoses, who is experiencing "technical difficulties." It's Trevor Cahill against Madison Bumgarner, same time as this evening. See you for that.