Welcome, tonight is the second game of the Dbacks 2013 season. Tonight we see the new thinner Trevor Cahill take on The St. Louis Cardinals' Jaime Garcia. Not to mention the debut of Alfredo Marte. Will tonight mean another victory for us or will we lose our first game of the season? Find out after the jump.

The first inning starts out fairly uneventful with nothing of note really happening until the bottom of the second inning when Miguel Montero leads off with a Home run. Next Alfredo Marte comes up for his very first major league at bat. Unfortunately he flies out softly to left field. The excitement dies down until the top of the fourth inning when Matt Carpenter leads off the inning with a leadoff double. Matt Holliday grounds out but moves Carpenter to 3rd. Allen Craig grounds out and Carpenter scores to tie the game. Beltran walks, and then Molina grounds out to third to end the inning. The game goes quiet yet again until the top of the 6th, when Jon Jay gets hit by a pitch, then Carpenter flies out to left and then out comes Matt Holiday to ruin my day and hits a 2 run Home run. Allen Craig comes up to bat afterward and quickly strikes out. Carlos Beltran singles and then Yadier Molina walks. Cahill is replaced by Tony Sipp who is making his Dbacks Debut after coming over from the Trevor Bauer trade. Sipp wastes no time and quickly induces a fly out to center field to end the inning. Not much else happens until the top of the 7th when Heath Bell replaces Tony Sipp. Heath Bell waddles to the mound, throws a pitch and Pete Kozma knocks it right out of the park. Shane Robinson comes up to bat and walks. Jon Jay comes to bat and hits the first pitch for a 2 HR. Matt Carpenter doubles then Heath Bell decides to finally make a positive contribution to the world and strikes out Matt Holiday. Heath Bell is removed from the game after he gives up a single to Allen Craig. Josh Collmenter replaces Bell and quickly gets two outs. The rest of the game went quickly as the Dbacks failed to overcome the Cardinals 5-run lead and the game ended. 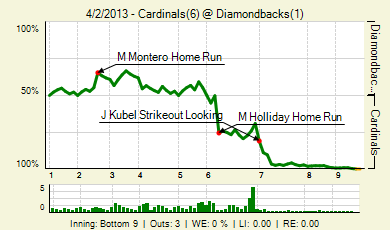